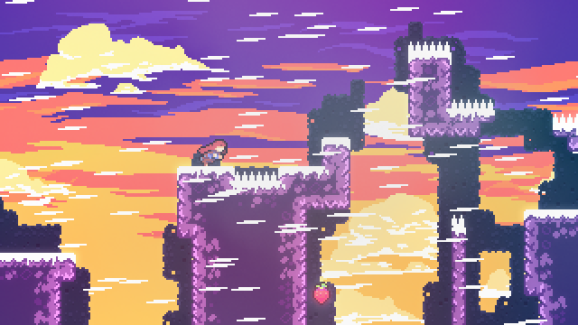 You can see the Towerfall lineage in Celeste's art.

I’ve started to ignore the indie platformer space recently. I dug into Super Meat Boy way back in 2010 on Xbox 360, but nothing has pushed the genre forward in the same way since. Sure, Cuphead got everyone’s attention, but that is more of a run-and-gun shooter like Gunstar Heroes. And Shovel Knight is incredible, but I thought its unique take (a modern NES game) was a special exception that proved that indie platformers are defunct. But I’ve spent the last day playing Celeste, and I’m happy to report that I was wrong.

Developer Matt Makes Games is best known for the retro-style melee fighter TowerFall that launched on the Ouya, which is something that existed. The studio, under the direction of its founder Matt Thorson, is back with the single-player platformer Celste. It is out now on Steam and Switch for $20.

Celeste has you playing as a young woman named Madeline who is trying to climb a pixelated mountain because it’s there. She can run, jump, air dash, and climb up walls, and the controls never get more complicated than that. But Celeste is a playground of clever ideas that keep it challenging and fresh.

Here’s an early example of the kinds of tricks that Celeste throws at you:

This is my shit #NintendoSwitch pic.twitter.com/5SMWG2sj9z

I love that Celeste is tough. It has a similar loop to Super Meat Boy. You enter a new area that acts like an obstacle course, and then you spend the next couple of minutes figuring out how to get through it while picking up bonus items. Through this process, you’ll die over and over, but Celeste reloads so quickly that you won’t mind.

My favorite part of Super Meat Boy was spending tons of time on one stage and perfecting my route and execution, but this also was the biggest drag on that game. I would obsess over my completion time on one stage, and I would take hours before actually moving on to the next one. That caused me to burn out on Super Meat Boy before finishing it.

Celeste enables me to avoid falling into that same trap by putting its stages in a connected world. When I finally get through a space, I’m instantly in the next room. And that keeps the progression toward the end of the story in the front of my mind.

Matt Makes Games also imbued Celeste with a narrative and characters. It hits a lot of familiar beats for anyone who has played indie games in the last couple of years. You get jokes about anxiety attacks and social media in rapid succession. I don’t hate it, and I’m glad that the cutscenes are relatively short and get me back to the action quickly.

At the rate I’m burning through levels, I’m sure I’ll beat the game soon. And I hope I don’t have to wait that much longer until the next great indie platformer because my heart has unlimited space for these kinds of games.