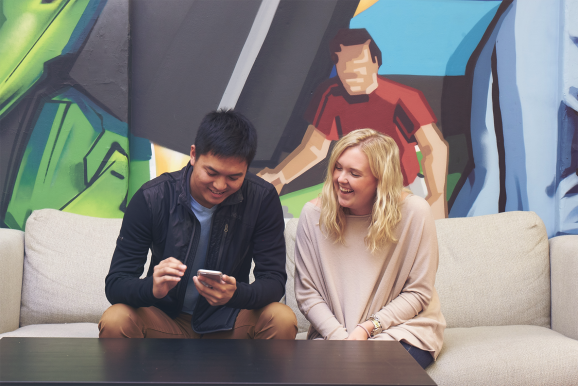 Mobile gaming is a massive market with 2.6 billion players – and it’s about to get even bigger.

Why? Major technology advancements and new backing from leading gaming and entertainment forces are delivering the social shot in the arm that has sparked Facebook-like growth for so many other realms of technology. With social technology driving a more connected mobile gaming ecosystem, it’s no wonder mobile games have already surpassed PC and console games in terms of revenue – and we’re just getting warmed up.

Building a socially focused gaming ecosystem has been held back largely due to form factor limitations. Older phones had limited processing power and connectivity to power the instant, synchronous interaction that we expect from games. However, that’s changing. New mobile gaming technology is creating exciting new avenues for people to play games with friends (and make new ones).

As anybody who’s challenged their mom in Words With Friends while waiting for the bus knows, social and multiplayer gaming is consistently more popular among players. Today’s game developers are continuing to lean heavily into the multiplayer markets and thanks to the major advancements in technology, we’re seeing the opportunities for mobile game developers to create socially-focused ecosystems on both iOS and Android.

Multiplayer is the foundation of today’s social gaming atmosphere, and is responsible for building MMO powerhouses such as World of Warcraft, Dota 2 and League of Legends. These titles were among the best at recognizing the massive potential of building a social environment in gaming, both facilitating and building upon player connections and interactions. Over the years, these social games have facilitated real human relationships between players – both online and offline. A Pew Research Center survey reported that 36 percent of respondents met new friends while playing video games.

Making connections through gaming even inspired an episode of “How I Met Your Mother,” in which Ted Mosby claims to have met a girl through “online dating,” but in the end it’s revealed he actually met her while playing World of Warcraft. That may have felt like a rarity when the episode aired back in 2007, but more than a decade later in 2018, taking online connections offline is the new norm among gamers.

Just look at Nintendo’s past year. After releasing the Nintendo Switch in March, the console sold 10 million units by the end of 2017. The console/mobile hybrid offers console gameplay at home on a television, but can also maintain its console quality while being played in a crowded bar or a late night cab – anywhere, really. The Switch blurs the lines between typical console and mobile controls by providing both controllers and a touch screen, which lets players choose their favorite way to play. Consumers can play competitively in person or online, creating a new level of flexibility to connect in any way a player sees fit.

While on-the-go triple-A gameplay has been vital to the Switch’s success, it was the console’s focus on social and multiplayer activity that pushed its success over the edge. From the initial reveal, Nintendo wanted its players to know that this device was intended for social gameplay, whether it’s online or local co-op.

More powerful hardware that enables social mobile play is essential, which is what makes the recently released mobile phone from Razer so exciting. Drawing from Razer’s vast experience building high-powered gaming PCs, the Razer phone is the first smartphone created specifically for gamers and offers powerful specs, including 8 gigabytes of RAM, a 4,000mAh battery, and a 5.72-inch, Quad HD IGZO LCD screen with 120Hz capabilities. Razer is already working with companies like Square Enix and Tencent to ensure that the phone will launch with console-quality games with social functionality expected to be central to the gaming experience, now that they have the hardware that can handle it.

Last year, Niantic’s Pokémon Go phenomenon left no corner of the world untouched. With mobile augmented reality technology, Niantic created a breakthrough interactive experience that made players social. Gamers have gotten out of the house to explore their cities and towns, and have formed in-person and in-game relationships with other players at PokéStops and Pokémon “gyms.”

Since the game’s launch, Niantic has continued to produce updates that are socially minded, enabling players to work together or engage in friendly competitions. This title is a prime example of how multiplayer competitions combined with social interactions can drive massive adoption. To this day, Pokémon GO is one of the most successful and profitable mobile apps in the market – and it will be exciting to see if Niantic can recreate or exceed the magic with its forthcoming Harry Potter offering.

The missing ingredient for mobile

These have all been impressive technological advances that move us closer to making gaming fun and accessible to everyone. Yet a critical gap has remained in the social gaming revolution: the absence of widespread chat for mobile gaming.

Chat programs have been a staple of the PC and console gaming experience on platforms such as Sony’s PlayStation Network and Microsoft’s Xbox Live, but technological limitations have kept chat functionality for mobile gamers minimal at best.

Mobile gamers have had to choose between non-integrated chat experiences, such as those offered by companies like Discord and Skype, and game-specific chat programs, such as those found in games including Mobile Strike by Machine Zone. Even major players like Blizzard and Nintendo haven’t been able to create true player-to-player communication. But a singular integrated communications platform – and the hardware to support it – is vital to allowing players to build new relationships and help game developers create a social gaming ecosystem that lives in the smartphone everyone already carries in their pockets.

Fortunately, technological breakthroughs are moving the needle here as well. New developments such as in-game chat features enable gamers to connect as they play across thousands of different games. With this type of new technology, players are forging real connections with their fellow competitors and are playing more competitions than before. Simply stated, social experiences make gaming more fun.

It’s a thrilling time for the gaming industry. Almost every human on earth enjoys engaging in some form of gameplay because it brings us together through competition and cooperation. As game developers continue to build new and innovative gameplay experiences, technological advancements will provide the tools to bring people together but the development of social ecosystems will be the key determinant in whether these new games are hits.

Andrew Paradise is the founder and CEO of mobile esports company Skillz.