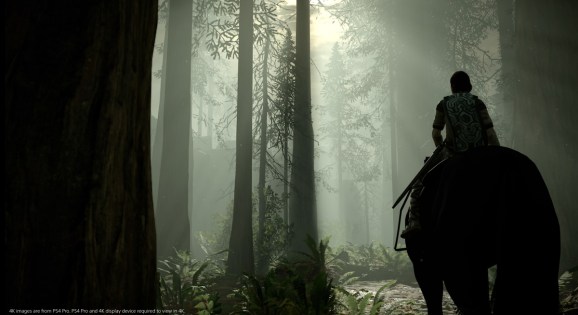 Shadow of the Colossus remake is still unique.

The PlayStation 4 remake of Shadow of the Colossus is a sad experience. That’s because it’s about not only destroying beautiful creatures but also a somber reminder of what we always thought games were.

We’re more than 12 years removed from the release of Shadow of the Colossus on the PlayStation 2, and Sony Interactive Entertainment has remade it from the ground up for the PlayStation 4. Bluepoint Games, the studio that did the Xbox 360 port of Titanfall, handled this version, which is available February 6 for $40. The developer remade all of the assets, but it tried to use as much of the original code as possible — although it did make some subtle improvements.

So what is like going back to this masterpiece? It is still a technical marvel even if Bluepoint did blunt the style of the original director, Fumito Ueda. But more than anything, it’s tragic to go back because now we know better. We now know we shouldn’t kill the colossi, and we now know that no one ever made games this way again.

Sony couldn’t make a game like Shadow of the Colossus today, and it doesn’t. Colossus is quiet, contemplative, and empty, and all of those elements fit together to support one another. You go from one fight to another in a land devoid of not only life but also side quests, hunting, and crafting. Even with Sony holding the torch for single-player narrative experiences, Horizon: Zero Dawn, the upcoming God of War, and Naughty Dog’s games all avoid emulating Shadow of the Colossus in almost every way.

It’s also not that replayable. You can’t turn it into an online multiplayer game-as-a-service, and it would still require a massive budget.

Shadow of the Colossus wouldn’t exist in 2018, and it never should have existed in 2005 on the PlayStation 2, either. Ueda and Sony Japan Studio pulled off a miracle when it shipped Shadow of the Colossus on that console. The scale and the detail was impossible, and it maxed out the hardware. That’s why the original had such an inconsistent frame rate.

But even as the PS2 struggled to run the game, it worked. Shadow of the Colossus was this massive, overwhelming adventure. And I was convinced at the time that I was playing the harbinger of what was to come. It didn’t work out that way. Shadow of the Colossus isn’t some obscure thing, and it doesn’t necessarily have mechanics with broad appeal. It’s about solving puzzles to figure out how to climb a monster so you can stab them until they die. It doesn’t have that endlessly replayable loop that you find in a lot of open-world games today.

For a time, however, Shadow of the Colossus made us think that the biggest publishers were going to pour their time and money into cinematic action-adventures that were simultaneously thoughtful and introspective.

I’m trying to pick a single moment from my time with Shadow of the Colossus to demonstrate its beauty, but it is brimming with examples.

The first time you ride your horse across a field. The first time you walk your tiny hero alongside one of the beasts and get a sense of the scale. The moment that the flying colors first take you into the air as the wind rips through your hair and the monster’s feathers while the musical score changes to match the change in your altitude. Anytime you ride past the vista overseeing the waterfalls.

Bluepoint reworked the visuals into something that looks modern and also supports the power of the PS4 Pro. And it really is stunning.

Bluepoint fixed the bow so that it is useful now. It made the horse smarter and easier to mount. And you can now save anywhere.

These are minor changes. I didn’t notice them until some fans pointed them out during a stream. But they are welcome improvements.

This isn’t a major problem, but I think Bluepoint lost something special about Shadow of the Colossus during its transition. Where the world once felt like a dream, the remake gives everything a crisp, clean look.

I miss that ethereal look even if the new game is technically marvelous.

We’re lucky to live in a world with Shadow of the Colossus. I hope that more people get the chance to play it now and that it goes on to inspire a generation of indie developers. But, more than anything, I’m just happy to play it again.

Shadow of the Colossus launches February 6 on PlayStation 4 for $40. Sony Interactive Entertainment provided GamesBeat with a copy for the purpose of this review.