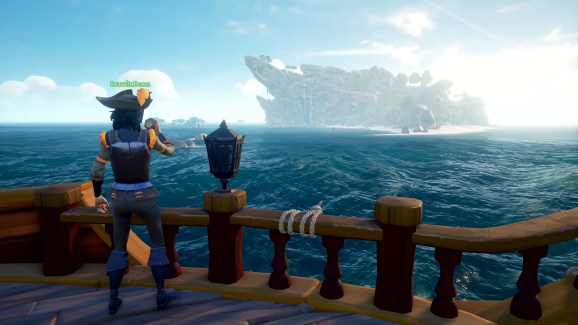 Sea of Thieves in 4K.

Sea of Thieves buzz is hot coming out of its closed beta on Xbox One and Windows 10. It had one of the biggest audiences on livestreaming sites like Twitch and Mixer over the last week, and a huge number of people seem excited for its March 20 release.

The online cooperative pirate simulator from developer Rare and publisher Microsoft had a closed beta that ran through January 31. It’s simultaneously realistic and a cartoonish as players work together to adjust sail length to catch the wind but can also get shot out of a canon to fly through the air. That is a winning combination, whether you’re playing with friends or strangers (with headsets and a vocabulary bigger than racial epithets).

But while the general tone and interactions have me convinced, I’m still unsure about its long-term prospects.

The beta, which was open to anyone who preordered Sea of Thieves, at least accomplished the goal of keeping me excited for the final product — and I’m not alone. The wider consensus on social media and forums ranges from fevered anticipation at best to amused curiosity at worst (outliers exist, of course). Sea of Thieves is a hit. It’s something that Microsoft can point to as evidence of its ability to create something new that players are excited to play and even watch.

Microsoft summarized the beta performance in an update to the game. It had 314,000 total players and a peak concurrent player number of 35,882. That is comparable to a popular blockbuster launch on Steam.

We can also measure some of the enthusiasm for Sea of Thieves based on how well it did on Twitch.

Over the last seven days, Sea of Thieves was the third most-watched game on Amazon’s livestreaming platform, according to tracking tool Sully Gnome. It had an average of 77,374 viewers. That puts it ahead of new release Monster Hunter: World and its average viewership of 66,975. Only perennial esports hits Counter-Strike: Global Offensive and League of Legends had larger audiences.

What’s especially impressive about the Sea of Thieves beta is that it had far fewer people streaming it. It only had 10,645 broadcasters over the last seven days as opposed to the 54,984 for Monster Hunter. So those fewer channels were drawing a larger viewer count on average.

And you can see why the game has caught on so quickly on livestreaming sites. Rare built it to enable wacky, emergent moments, and it also has a sense of communal discovery when you are playing with friends as well as dozens of viewers.

What happens if you sail off the world in Sea of Thieves pic.twitter.com/RVIoCHMfUJ

But Sea of Thieves isn’t a success yet

Microsoft and Rare have a hit game, but today’s gaming market is capable of producing hits that somehow still aren’t all that successful — meaning a game can have a huge launch with a ton of hype before ultimately disappointing players over a matter of weeks or even months.

Now, I’m sure the publisher and the developer have their own guiding key-performance indicators. For example, if Sea of Thieves drives a wave of signups for Microsoft’s Xbox Game Pass, the publisher will probably take that as a win.

When I say that Sea of Thieves isn’t a “success” yet, I’m talking more about in terms of player expectations. Destiny 2 was a hit. It was one of the best-selling games of 2017. But is it successful? Well, fans are drifting away from it as their passion wanes due to a lack of content  — and that’s not what most people expected.

Sea of Thieves could emulate a Destiny 2-like trajectory if Microsoft and Rare don’t give fans the hooks they need to keep them coming back. That’s what I expect from Sea of Thieves, and all of this buzz will just mean greater disappointment if the final game doesn’t have the mission variety, the character and ship progression, and the player-versus-player interactions that could turn today’s excitement into one of 2018’s most-played games.