GamesBeat: Can you tell me more about the world of Valleys Between? Is it drawn mainly from the real world, or is it more a fantasy world that borrows elements from the New Zealand landscape?

Fitzgerald: It is somewhat based on the real world, as much as a stylized puzzle game can be. When my concept artist was doing up the designs, we were looking at a lot of natural formations, particularly the background mountains and forests and how things connect together. We’ve definitely been looking at New Zealand and other beautiful places, so it is more based on a realistic world in that sense. But we’ve simplified the world down to the core.

Part of the game is around discovering these relationships between things, between nature elements and more human communities, discovering what happens when you have a forest next to this type of building. Does it become this sort of thing? In one of the concept art images, the purple one, there’s a house that’s beside a river. It’s created a water wheel, so it’s the idea that the environment is adapting around the things that appear, but also the things that—the structures and the communities that appear are adapting to the environment. 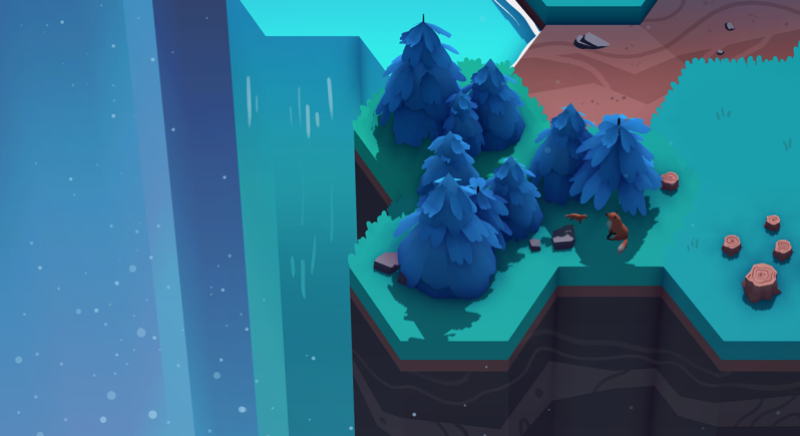 GamesBeat: You referred to it as a sort of puzzle game. Can you tell me more about how that’s structured?

A lot of them are human-focused — factories and other buildings and that kind of thing. But we’re looking at some natural elements as well, how we can balance that out. Things that happen in the world, there’s a fair range of things, if you’re looking at it, that you really need to deal with. We’ve been exploring this idea of balance, pulling up and pulling down, having equal and opposite reactions, and every action you do you need to rebalance it with another action.

GamesBeat: What would you say has been the biggest challenge in that development process? Is it just figuring out how that progression will look, or balancing the mechanics as you mentioned?

Fitzgerald: Probably the biggest challenge would be retaining that core spark of the game, of the original concept, that had people wanting to come back. We’ve added some new mechanics to the game, but really, it’s been more of a reshaping and a development of them. As with anything, when you start reshaping something that’s already working well, it’s challenging to keep the feeling the same, but give it more depth to the mechanic, more reason for it.

And actually, working alongside Dinosaur Polo Club has been really useful in this, because their game Mini Metro was originally a game jam game. They had a very similar process where they had this small game, this small prototype, that people liked, and they wanted to build on it. They had to take it from this game jam game to a full game in Mini Metro. We’ve been relying a lot on their experiences and some of the processes they’ve used.

GamesBeat: Why did you decide to develop the game for iOS, as opposed to PC? Do you see any potential challenges when you launch, since it’s a pretty crowded marketplace?

Fitzgerald: It was a decision we thought a lot about. Our original goal with Grow was for it to be a mobile game. We think the idea of having small games with small interactions felt like it fit very well in the mobile market. Part of the interaction on mobile with the game is you swipe up, pull up on the world to do a thing, or pull down on the world. It’s a very tactile kind of feeling.

We haven’t ruled out Steam or releasing on other platforms, but with the team size of four, we really wanted to narrow down and focus on creating something that was really polished and really good. We decided that iOS was our first place to go, and then depending on how that goes we can look at other platforms later on. If we took it to PC, to Steam, there would need to be some redevelopment of the game to counter the loss of the actual physical touching and shaping of the world at your fingertips.

GamesBeat:  Can you tell me more about the indie scene there? It sounds like maybe you and the team have made some games before, but it wasn’t until Valleys Between that you went full time?

Fitzgerald: Financial support is always a tricky one. The game development scene in New Zealand, in general it’s amazing. New Zealand is quite a small place, but we’ve had some really great games that have been made by Kiwi indies and studios. The scene here is constantly growing. It’s quite incredible. For the size of the country and our population, we have a lot of game developers doing some great things. Funding is tricky. That’s something we’ve been working with the government and looking at different initiatives–how we can support more game developers, more indie game developers. The community here, though, it’s incredibly friendly and incredibly supportive.

Since we started Little Lost Fox we’ve had so much help from other people. People have gone out of their way to approach us and share their experiences and really—it’s a really uplifting and helpful kind of community. Everyone wants everyone to succeed. And so part of that is sharing experiences and mentorship opportunities. People being really open and honest and caring with everyone. It’s a really lovely scene to work in. I don’t think there’s anywhere else we’d rather be right now. With great studios like Dinosaur Polo Club and Dry Cactus, who are able to support some new startups like ourselves, there’s a lot of potential for new indies and new studios to keep growing and keep developing.

GamesBeat: Are there local meetups or events where you can go and playtest your game and show off what you’ve been working on?

Fitzgerald: Yeah, absolutely. We have a rather large number of them compared to the size of the country. We have monthly game dev meetups in every hub in New Zealand, basically. There’s a lot of social events. Because we’re a smaller place, we have a limited number of conferences in the country every year, so those are really good opportunities for all of the game dev industry to band together. We have a New Zealand Game Developers Conference that’s run later in the year. Last year we had over 500 attendees from local, New Zealand, and also some international guests as well. We take every opportunity we can to get together and meet and chat and support each other and do all those fun things. But yeah, meetups everywhere.

GamesBeat: I feel like there’s a big appetite now for these kind of relaxing, beautiful games. Why do you think players are looking for these types of experiences?

Fitzgerald: I think part of it is, we’re all very busy. While there’s a lot of different kinds of games, and sometimes you feel like a high-intensity kind of action game, or you want to really dive into a story and a narrative and become part of a story—sometimes you have 10, 15 minutes. A lot of people will jump on Facebook or go through Reddit or Twitter. Sometimes that’s fine, but I think the great thing about these quite meditative and relaxing games, they help you switch off. Quite beautiful experiences are great in that sense, because you start feeling relaxed, but you’re also getting that creation and discovery and positive feelings as you’re doing that.

That’s what we wanted to try to do with Valleys Between, create something that’s a really beautiful and relaxing experience, but let the player still have these moments of challenge, still have these moments of discovery and joy. It’s the kind of game where you have 10 minutes and you think, ah, I’ll have a play, I’ll see what I can develop in my world, what I can discover, what new things I can unlock and find. At least for me, the games I’m playing more on my phone now tend to be more of those small little experiences that I can get these immediate reactions and emotions from, rather than something I need to commit a lot of time to.