Sega recently unveiled a new type of Total War game, Total War Saga: Thrones of Britannia, as the latest in a long-running series of strategy titles for the PC. I played it, and it combines real-time combat with a metal-layer of strategy and diplomacy.

Total War Saga: Thrones of Britannia will focus on a particular historical period, with the battle for the British Isles during the Viking invasions. It starts after Alfred the Great wins a victory over the Nordic invaders at the Battle of Edington in 878 A.D. It will ship on the PC on April 19. Preorders are available today.

It was easy for me to grasp, but I’ve been playing the franchise since it started in 2000 with Total War: Shogun. The strategy series now has 15 entries that have combined sold over 20 million units. Developer The Creative Assembly, the studio behind Total War, also made Halo Wars 2 for Microsoft. The fantasy-themed Total War: Warhammer II debuted in September, but Britannia takes the series back to history.

Unlike the Total War games that can span huge eras, Total War Saga will explore key flashpoints at distinct places and times in history, said James Given, community manager for Total War, in an interview. Time progresses at about one season per turn, and a game might take about 200 turns to finish.

The strategic map is built on Total War: Attila, which is about the fall of the Roman Empire. But while Attila covered much of Europe, the Britannia strategic map is much more concentrated. The whole geographic area is under a much tighter microscope. You move your armies around the strategic map, and when you meet another army in battle, the action zooms into a 3D landscape where the enemies clash.

When I first zoomed into a battle, I noticed that I could see the individual shops in a bazaar in the middle of a small settlement. I zoomed out and could see the few square miles of battlefield where the armies could maneuver. That represented an astounding amount of detail. 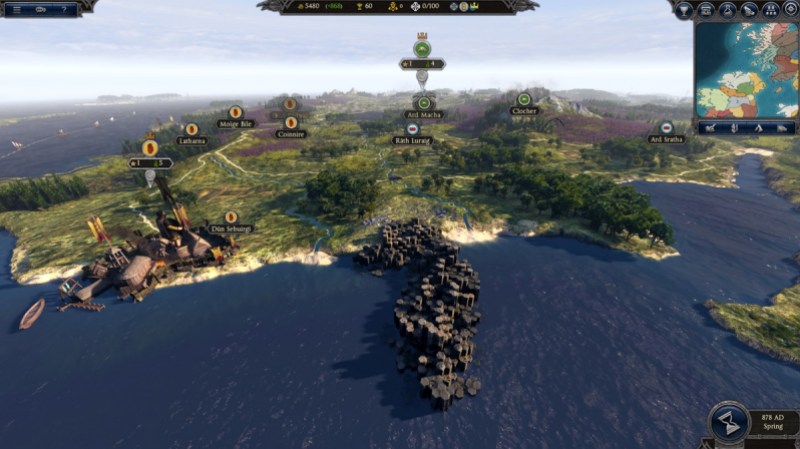 Above: Rule Britannia. That’s the goal of Total War Saga: Thrones of Britannia.

Before Given showed me the game, he gave a history lesson about the Viking invaders. While Alfred the Great won, he subsequently made a deal with them. He converted the Viking leader Guthrum to Christianity, and then he used the Vikings as allies to become the dominant ruler in England. For the first time in 80 years of Viking raids, the territories enjoyed a measure of peace. That, in short, is your own task in the game, to become Britain’s ruler.

“We wanted a distinct point in history, with the Viking invasions of Britain,” Given said. “It has a huge map of the British Isles, the most detailed that we’ve ever done, with 10 playable factions across five cultures.”

I started out the game as King Flann, leader of the Mide faction in central Ireland. For the cinematics, the game uses 2D imagery from the art style of the time, as taken from historical documents. My faction had diplomatic bonuses because it had produced many of the previous kings of Ireland. And the faction had unique cultural advantages from owning churches and Irish land.

“There are lots of petty kingdoms at this time jostling for control of the British Isles,” Given said.

As the game begins, you face a series of choices that can branch the story in different historical directions. You can achieve victory by aggressively expanding through war, by increasing your fame through construction, achieving technological innovations or influence, or by completing a series of objectives for your particular faction’s history.

The troubles of King Flann 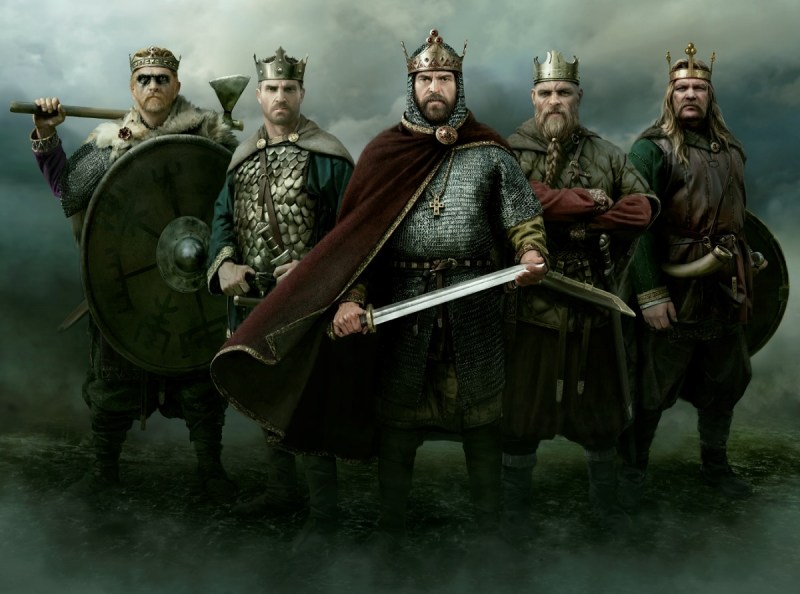 Above: Make sure your king doesn’t die early.

At the outset, I controlled a province with two major cities and a bunch of minor settlements, which are identified as farms, mines, or other kinds of productive places. Other factions include the English, the Gaels, the Welsh, the Great Vikings, or the Viking Sea-Kings. The Mide clan is one of the Gael factions.

At the beginning, I faced a minor rebellion to the west. I recruited troops to my army. Those troops, in contrast to the past, only gain 25 percent strength per season. That represents the concept of mustering an army and gathering its supplies. That slows down the amassing of armies, but you can also raise these anywhere, so long as your army in the field is in a fortified stance. Another good thing is that each faction now has a global pool from which to recruit new units. You no longer need a specific building to recruit a specific unit type, like cavalry, in a particular city. You can recruit any kind of unit, wherever you are, so long as you have research the tech behind it.

So I marched King Flann and his army to the rebels and met them on the field. I outnumbered them, and I had javelin troops who were quite lethal from a distance. I zoomed into see how the battle was going and it was good. I had one set of horse archers and a small group of heavy cavalry. I charged with the cavalry and pushed the enemy back. I kept doing that, but then I realized that Flann was part of this exposed group, and he was quickly killed. But my troops were able to overcome the enemies and I vanquished them. 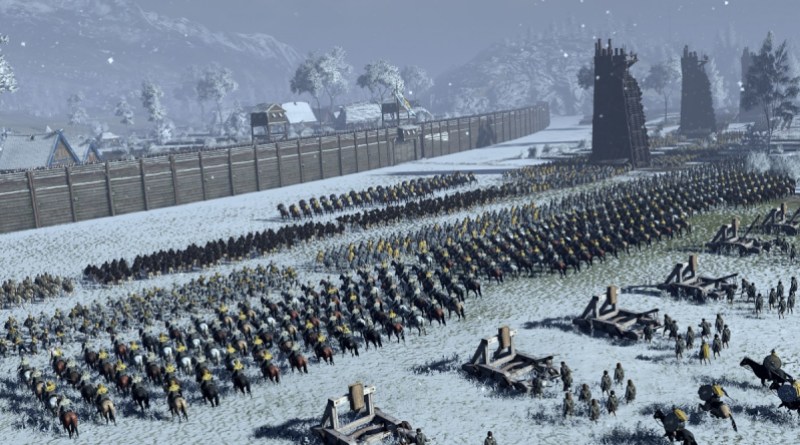 Above: Thousands of soldiers can fight in real-time combat in Total War Saga: Thrones of Britannia.

But after the battle, I was in a fix. My heir was only 10 years old, and the defacto ruler of the realm was my 31-year-old queen. She didn’t get much respect from the other leaders of my faction, and so three of them were immediately at risk of rebellion. There are no spies or assassins in this game, but internal family politics can tear your kingdom apart.

I started improving my farms with each strategic turn, enabling me to collection more gold and feed larger cities and armies. Given reminded me that I had to pay careful attention to how many soldiers I recruited, since that pushed the food supply to its limit.

Just as I was starting to build up, the Vikings invaded the coastal province next to me. I decided at first not to intervene. Rather, I wanted to watch what unfolded. After a couple of turns, I decided to attack them. So I went after one of the farms that was on the border. I attacked it and initiated a war.

I was in a good position because my people had “war fervor,” which meant their appetite for war was high. They wanted to fight. War fervor can get you going, but it can also hold you back if your population decides it has had enough.

I had to split my army in two and go after the Irish faction. Then I sent my larger army to besiege the Irish faction’s keep. Both times, I fought the battles automatically on the strategic level, rather than go into the full 3D landscape battle. I was victorious and wiped out the Irish faction, but the Vikings were still a problem to face. 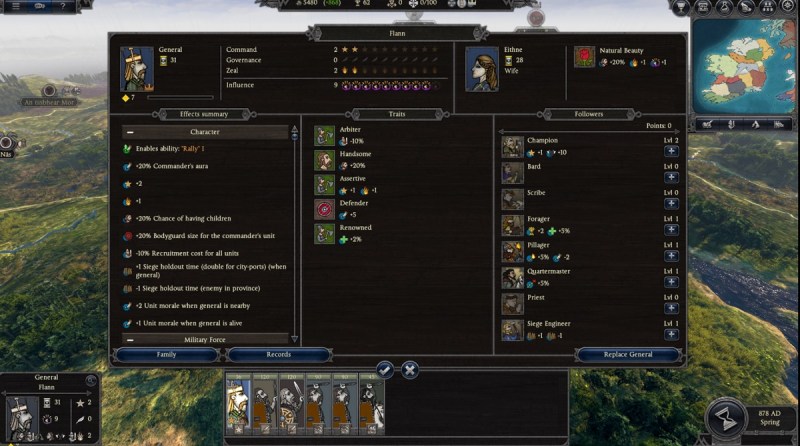 Above: The interface can be complicated, but it reflects the depth of Total War Saga: Thrones of Britannia.

I also had to tend to a celebration, dubbed the Fair of Tailtiu. I spent 500 gold on this event, where the people of Mide periodically gather to hold a great fair, benefitting the faction and improving relations with its allies. When I hit the end turn button for the close of strategic maneuvers, the computer processed all of the AI faction moves. There were dozens of other factions, with many of them declaring war on each other in distant provinces. But I just worried about my neighbors.

I didn’t have time to do much research. But the tech tree is divided into eight military and six civic branches. You have to research things like Missile Specialists to get better ranged units. When you do it, those units are available for you to recruit in the pool.

Each province on the map consists of a provincial capital and a series of minor settlements. Capitals have walls and garrisons for defence, have six building slots, and tend to house structures relating to finance, trade, infrastructure, production and the military. Capitals also house larger religious centers, and famous cathedrals can be built in the appropriate towns, granting fame for your leader. Your leader gains traits such as “passionate” or attributes such as zeal, inspiring better performance from followers or armies.

As your leaders gain experience, you can customize how your faction develops. You can add more Champions as your followers to improve the leader’s combat abilities, or you can add Quartermasters to improve your logistics. So your leader doesn’t really change. But the followers behind your leader determine the unique characteristics of what the leader is capable of doing. You can tune the followers for combat or for running a province with bureaucratic efficiency. 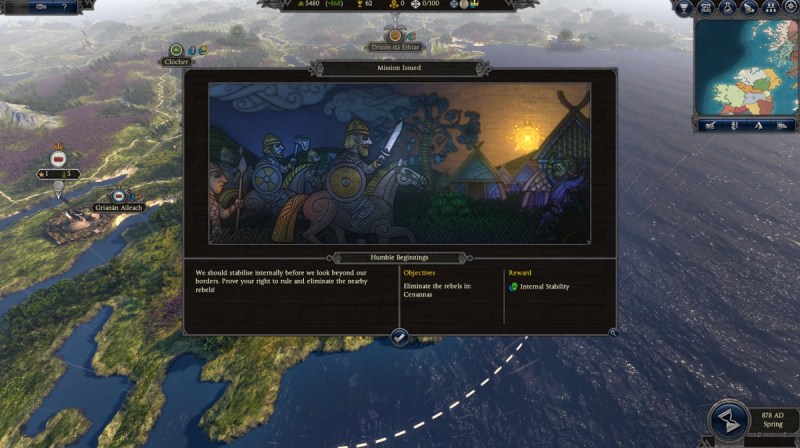 Above: The cut scenes have 2D-style art in Total War Saga: Thrones of Britannia.

I didn’t get much time to play. I played for just a half hour, and Total War games can go on for dozens or even hundreds of hours. But this title looks very interesting, and it is really a welcome return to historical battles and empires. I’m grateful the Creative Assembly is still focused on delivering this special kind of hybrid of real-time combat and a strategic meta game. And I’m looking forward to seeing more.

The system requirements are below: