Fortune-499 brews up a delightful cross-genre adventure. It’s a role-playing game with deck-building in a world where magic and corporate espionage are inextricably intertwined.

The story centers on Cassandra — or Cassie — a young oracle who works in the magical resources department in an anonymous corporation. Monsters begin plaguing the company after an initial public offering (“Monsters love offerings from humans!” exclaims one of the many cheeky enemies), and Cassie must use her fortune-telling abilities to save her job from a hellish merger and acquisition.

Though Fortune-499 isn’t terribly similar to developer AP Thomson’s previous game, the “cyberpink” puzzler Beglitched, the two share a sense of humor and both weave the occult in with modern technology and everyday concerns. It’s available on PC today as a Humble Bundle exclusive. 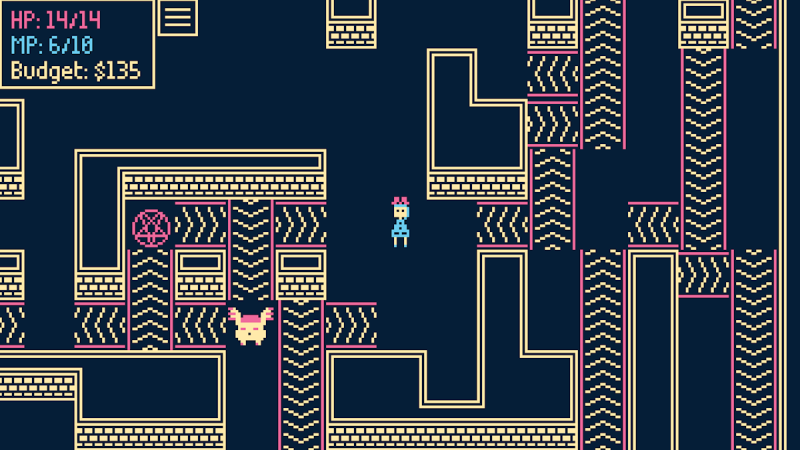 Above: You’ll have to solve environmental puzzles in some of the rooms.

Cassie doesn’t have any flashy tricks or awe-inspiring magic powers. She does have a handful of spells, but her main skill is predicting the probability of future events. Fortune-499’s battle system presents combat as a game of rock-paper-scissors, though those are more metaphorical than anything. At one point, she describes the “paper” attack to a coworker as a kind of defensive move, but for the player, all three moves are essentially the same.

It’s a neat little system. You draw cards from a deck to predict what the enemy will do, and strategize accordingly. If you pick up a card that says Rock +3, then there’s a moderate chance that the enemy will play rock — so the correct move would be to have Cassie play paper. However, that’s only the likelihood, so you’re occasionally at the whimsy of fate. And you can draw up to four cards per turn, but that might cast doubt on your prediction — for instance, you could draw Rock +3, Scissor +3, and Paper +3, which gives you basically no information. To offset the randomness, you can add more cards to your deck, upgrade them, or shred them.

I enjoyed this battle system, as well as the little quirks of certain enemies. And Fortune-499 often shakes up combat by presenting additional challenges. In one room, you have to find a way to defeat all the enemies simultaneously. Occasionally, you have to use certain spells — like File, which enables Cassie to put a card on top of her deck — or special cards to defeat a monster. 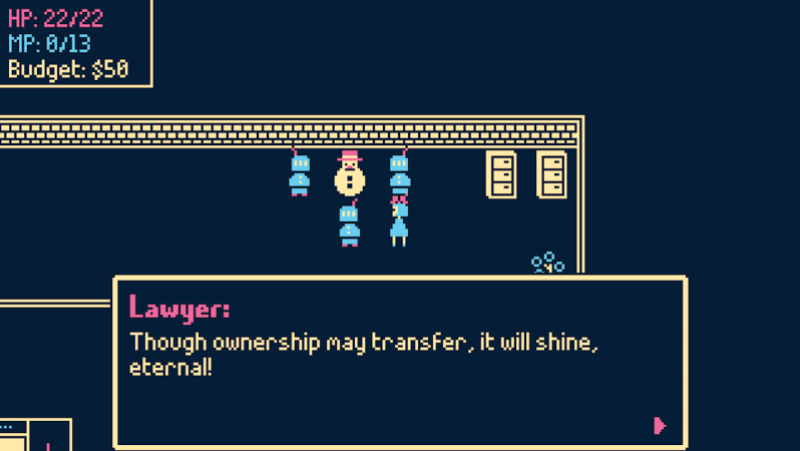 Above: Aside from the networking event, the legal department was probably my favorite.

Fortune-499 embraces its cuteness and silliness, and it delights in making fun of corporate culture. In her monster-hunting adventure (or “project” that she’s spearheading at the company), she visits several departments. In accounting, they’re obsessed with balancing the books. In the legal department, the employees’ battle cry is “Protect the IP!” At one point, Cassie finds herself at an awkward networking event, and I related with every fiber of my being. All the dialogue is brimming with personality, and I giggled at several points.

But beyond just the jokes and glib one-liners, Fortune-499 delves into topics like emotional labor, work-life balance, insecurity, and how toxic cutthroat competition can be. Its characters deal with office politics, like the hot-shot coworker who takes all the credit for your work, or the timid middle manager who won’t defend you to higher-ups even though they know you’ve been working overtime.

Unlike traditional RPG stakes, where the world is in peril, Cassie’s just trying to do her job. The question of why she’s giving so much of herself hovers over the whole game. In the midst of battle, occasionally enemies will say things like, “Hey, are you OK? Maybe you’re overdoing it — this is only a job, after all.” Though I love Fortune-499’s sense of humor, these lines were the ones that stuck out to me the most.

Fortune favors those with style 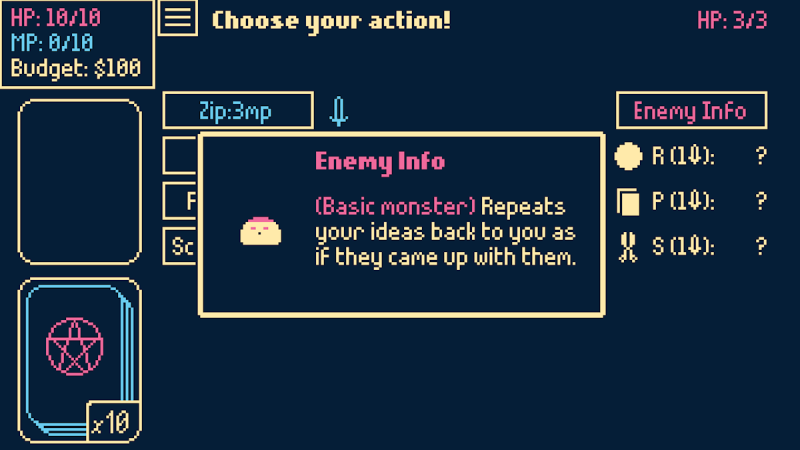 Beglitched co-developer Jenny Jiao Hsia provided additional art for Fortune-499, and she and Thomson have created a sherbet aesthetic that’s simple, clean, and adorable. Its pixel art world is pink, blue, and yellow, and though it’s minimalist, it’s evocative. The animation is also charming — I like how certain cards burn up after they’ve been used and the way an enemy’s stats will shudder off the screen when they’ve been defeated.

Accompanying the cute graphics is a crunchy soundtrack that pulses with energy. In certain scenes, it’s replaced with what sounds like low-fi indie guitars filtered through the guts of a warbling machine — like you’re being serenaded in a classic beat poet coffee shop that’s been turned into a cybercafe. 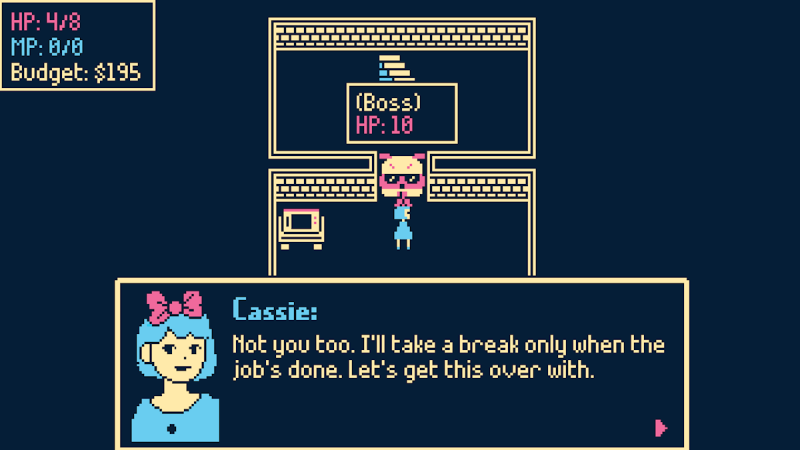 As much as I love the quippy back-and-forth, I was frustrated that I couldn’t skip dialogue even when I’d seen it before. This means after you’ve died, you’ll have to go through all the same conversations you’ve had before. And in a few cases, you have to reset the room in order to find the correct solution for a puzzle — and each time you’ll get the same introductory dialogue from characters you meet.

This was only an occasional issue, but it took me out of the game whenever it happened. 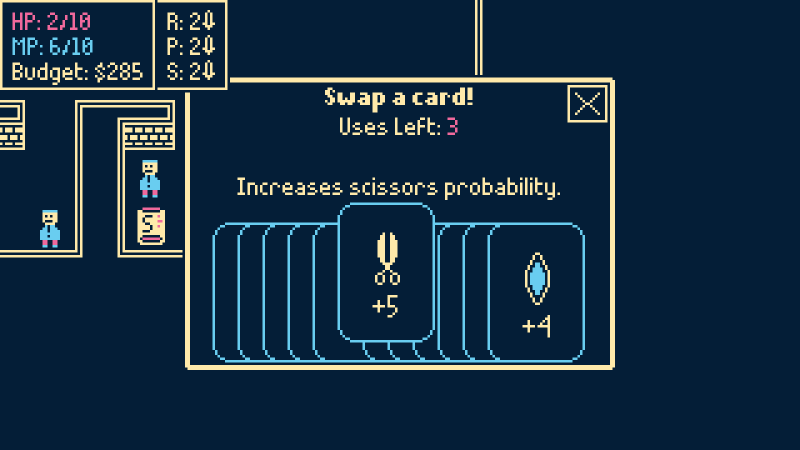 Fortune-499 took me about four hours to finish, which isn’t a deal-breaker. However, I wish that the game had gone on for a little longer just so we could see more of the world. For instance, I loved the idea of Major Arcana cards, each of which has a special ability. However, that concept is introduced partway through the game and then we only get to use maybe three of them in the rest of the battles.

I also wanted more from Cassie’s character arc. I felt like we’d skipped a few steps along the way to her ultimate realization, and I wanted more about her relationship with ineffable fate.

Thomson got a lot of things right with her character — she’s relatable and so are the challenges she struggles with. But some aspects of her life, like her relationship with her friends and family, weren’t fully addressed. One character was mentioned briefly but never made a proper appearance, nor was Cassie’s relationship with them clarified. I don’t think that the game needs to wrap everything up in a bow, but I think it could have benefited from fleshing out Cassie’s journey of self-realization and adding in a few more emotional beats.

Fortune-499 is a charming package. It’s got witchcraft, mid-20s malaise, and puns and witty monsters galore. Though I wanted a little more from the story, what I did get, I really enjoyed. The combat system could have easily become monotonous, but it remained fresh and quirky with the addition of new cards and mechanics.

Those who enjoyed Beglitched will likely appreciate Fortune-499’s tongue-in-cheek humor. It’s a fantastic blend of nostalgia and modern sensibilities, with terrific art and soundtrack to boot.

Fortune-499 is out on February 2 for PC. The publisher sent us a code for review.