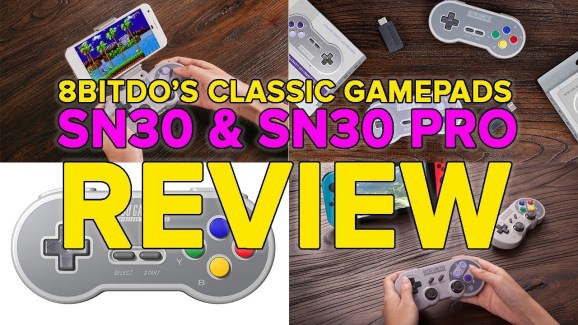 You have a lot of options when it comes to getting an extra controller for your gaming devices, but the peripheral manufacturer 8Bitdo is quickly turning into my first choice.

With the company’s SN30/SF30 and SN30/SF30 Pro gamepads, it has controllers that look and feel great while also working with a ton of devices. The SN30/SF30 are 30th anniversary updates of the Super Nintendo and Super Famicom controllers, and they are available now for $25 with a dongle for the Super Nintendo Classic Edition. The SN30/SF30 Pro is available for $49, and it comes with built-in Bluetooth for wireless connectivity with the Nintendo Switch and a number of other systems.

Both are priced aggressively and here’s why I think that the SN30 is the go-to classic controller and the SN30 Pro is a viable alternative to the Nintendo Switch Pro Controller.

The SN30 look and feel legit

Nintendo increased the length of the cable on its Super Nintendo Classic gamepad compared to the NES Classic, but you’ll still have to sit relatively close to the system to use it with that input device. That makes something like the 8Bitdo a huge quality-of-life improvement, but the SN30 goes beyond that by offering something that still has the retro look and feel that you probably want when you boot up Nintendo’s 16-bit hardware.

When you pick it up and start using it, the SN30 feels just like the original as well. I think the buttons and D-pad have a lot of spring in their actuation, but that brings a welcome responsiveness to the SN30. It is the best way to play Super Nintendo games.

The SN30 Pro is an excellent Switch controller

The SN30 Pro is quite a bit different than the SN30. This more expensive controller exists in that weird realm of third-party knock off controllers, but it stands above that weird MadCatz Nintendo 64 gamepad you bought from Blockbuster due to its quality.

The SN30 Pro has all of the buttons and features of a Nintendo Switch Pro Controller with the exception of the NFC reader. It has four shoulder buttons, a real D-pad, two analog sticks, and the equivalent of the + and – buttons. It is also one of the only Switch Pro controller alternatives on the market.

At $49, the SN30 Pro is a lot more affordable than the $70 Pro controller, and I think it is even better when it comes to its D-pad. The direction pad on the Pro has an issue where you think you are hitting in a cardinal direction, but you end up shooting off in a diagonal. That’s frustrating, since the Switch has many 2D games. The SN30 Pro’s high-quality D-pad doesn’t have that issue, and it has become my preferred way of playing intense platforming hits like Super Meat Boy and Celeste.

Both have a lot of versatility

The SN30 and SN30 Pro both work great, and 8Bitdo did a fine job with the manufacturing. But the thing that makes these controllers an easy recommendation is that they work with just about everything you could want.

You can get an SN30 with the Classic Edition dongle or with an actual Super Nintendo dongle to plug it into your actual retro console or the upcoming Analogue Super NT. But even if you only have the Classic Edition dongle, you can use it on your Wii, Wii U, and even your PC. The dongle has a USB port on it to connect to a Windows machine, which means it can work with emulators and other games.

The SN30 Pro has Bluetooth, and in addition to working with the Switch, I’ve used it on my PC, Steam Link, and Android smartphone. 8Bitdo even sells a clip that enables you to attach a phone to your controller to create your own handheld console. I use it to stream PC games like Hitman and Divinity: Original Sin 2 to my couch.

You may need multiple SN30 dongles

The only issue with the SN30 is the aforementioned multiple dongles. They aren’t too expensive — and at least you don’t need to buy an new controller. But you will need to have and manage multiple wireless receivers if you plan to use the SN30 on your Super Nintendo Classic in addition to an actual Super Nintendo or Super NT. 8Bitdo sells them on its site.

The SN30 Pro is a pain to sync to the Switch

The Switch just doesn’t seem to want to pair with the SN30 Pro that first time you go to set it up. Once you sync the controllers the first time, they work quite a bit better — although the experience is never as smooth as using the official Pro Controller.

8Bitdo is doing the best work in the third-party controller space right now. These devices are affordable, well built, and have all the smart features that you should expect. I think that’s the reason Analogue is working with 8Bitdo as the official controller for the Super NT. And if you play any 2D games on the Switch and find yourself wanting a better D-pad, you owe it to yourself to play with the SN30 Pro.

I highly recommend both.

8Bitdo’s controllers are available now. The company provided us with sample units for the purpose of this review.