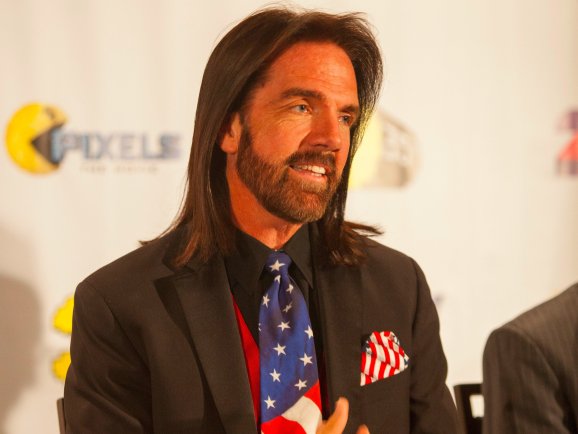 Never trust a man who wears an American-flag tie.

Embattled competitive gamer Billy Mitchell has broken his silence after a Donkey Kong fansite accused him of misrepresenting his high-score performances in the arcade classic. In an interview with livestreaming podcast show East Side Dave (which has a subscription paywall), Mitchell admitted that the videos in score-verifier Jeremy Young’s analysis are indeed of MAME gameplay — but he then tried to play up doubts about the authenticity of those tapes.

I asked Young about Mitchell’s interview, and he explained why it doesn’t change anything.

“Claiming the video footage in the evidence is not real does not make sense to me,” Young told GamesBeat. “In regards to video sources and their potential fabrication, I would label that so unlikely as to be impossible. The amount of foresight, patience, and technical knowledge required would be staggering.”

Young explained that the only person who could have feasibly switched the direct-feed footage of Mitchell’s Donkey Kong tapes is Dwayne Richard, an active world-record holder in several games on Twin Galaxies.

“Dwayne claims [the Mitchell tapes] were given to him directly by [disgraced competitive gamer Todd Rogers], by request of Billy Mitchell,” Young explained in an email he provided to multiple outlets. “Dwayne uploaded a copy of [the 1.047 million run] to YouTube a couple of years ago …. All of this uploaded footage directly matches segments shown in both the theatrical release of King of Kong and a screener version that has circulated over the years.”

Richard uploaded the 1.05 million run to YouTube as well. The last 9.5 minutes of this run are also on the YouTube channel “Settle It On the Screen,” which was once the official Twin Galaxies channel. Former Twin Galaxies referee Michael Sroka manages Settle It On The Screen now, but he says he was not at the time and doesn’t know who uploaded it.

As for the 1.062 million run, two sources exist. Sroka has one, and an audience member named Dan Phillips shot some footage on his phone. Both show the same MAME screen-draw artifact that Young used to prove Mitchell didn’t play on original arcade hardware. MAME renders objects in bulk (all ladders at one time, for example), while the original hardware draws objects in from left-to-right like a sliding door.

So, what about Mitchell’s ‘real’ tapes?

As Young alluded to, it would require something of a vast conspiracy to change the footage in the available sources to something different than what is in the supposed real tape at Twin Galaxies. Rogers, who recently lost his Dragster record after technical analysis revealed his world-record time is impossible, gave Richard the tape, and Rogers is Mitchell’s in-person witness for his 1.047 million score. Mitchell’s accusation that the direct-feed videos are not legitimate would suggest that Richard somehow swapped them out.

But let’s have Young explain why that is improbable:

By my reckoning, Dwayne would have to:

I’ve reached out to Mitchell once again for a response to these accusations, and I’ll update this post if he provides any insights. For now, Mitchell’s claims to the status of “first person to reach 1 million points in Donkey Kong) are starting to look rocky at best.