Octogeddon is a stellar new arcade action-strategy game from Plants vs. Zombies creator George Fan and his new indie studio, All Yes Good. Just like PvZ, it’s zany. A giant cartoon octopus watches a video of a sushi chef slicing up an octopus, and he gets angry. He sets out to destroy the world, and the adventure begins. It is the briefest and silliest of video game plots.

Fan’s Octogeddon lives up to the mantra about good games: easy to play, hard to master. It debuts on February 8 (today) on Steam on the PC.

While the graphics are goofy, the thing that hooks you is the gameplay, which starts out ridiculously simple. You purchase a limb for your octopus, then add a weapon to it. On a PC keyboard, you press the A or D keys to move left or right. And that’s all you do for the whole game. Or you could use the left or right mouse buttons.

In rotating the octopus, you position the tentacles and the weapons attached to them so that they fire at the enemies and take them out before they converge on you. If they hit your head, you lose a life. Over time, you can add up to eight or more limbs. At that point, you become a deadly spinning arsenal, like a gunslinger with eight arms. But your enemies grow in difficulty and in number.

I found the game to be really enjoyable, and that’s a big deal, as Fan’s last game, Plants vs. Zombies, was a big reason why Electronic Arts bought PopCap Games for $750 million in 2011. But Fan took his time on this one. He got the idea during a game jam, Ludum Dare, in 2012. After he got the initial premise, he assembled a team of four and spent four years polishing it. Octogeddon is the result.

The destruction is massive

Above: The Sydney Opera House falls victim to Octogeddon.

Octogeddon is a great name because you destroy so many things. It feels like Armageddon, where you as the octopus can lay waste to humanity’s great cities. It’s so much fun to smash enemies, buildings, and monuments like the Statue of Liberty and the Eiffel Tower. During the biggest fights in the latter part of the game, you can lay waste to armies of attackers. Along the way, you run into quirky bosses such as a mechanical butcher on tank treads. You have to dodge their attacks, but when you take the fight to them, it’s so satisfying. The sounds of explosions are great, and the music is dramatic and quite motivating. The waves of attackers get bigger and bigger, and so does the destruction.

Humor that makes you smile or guffaw

Above: Octogeddon scares the crap out of little humans.

The humor is dumb, and the art style is cartoonish. But just like Plants vs. Zombies, some silly things make you laugh and grin. Octogeddon’s anger management problem is a subject of jokes. Little offenses — like a dolphin getting an award for best performance as an octopus at an awards show — set him off and he goes on a rampage.

I thought it was cute that Octogeddon crushes the small cars under his tentacles, and it was funny as tiny stick people jump out of buildings that Octogeddon is trashing. (They don’t die. They just scream and run away). Fan told me that was one of the last changes that they added, and he was so happy they managed to do it.

The weapons are creative 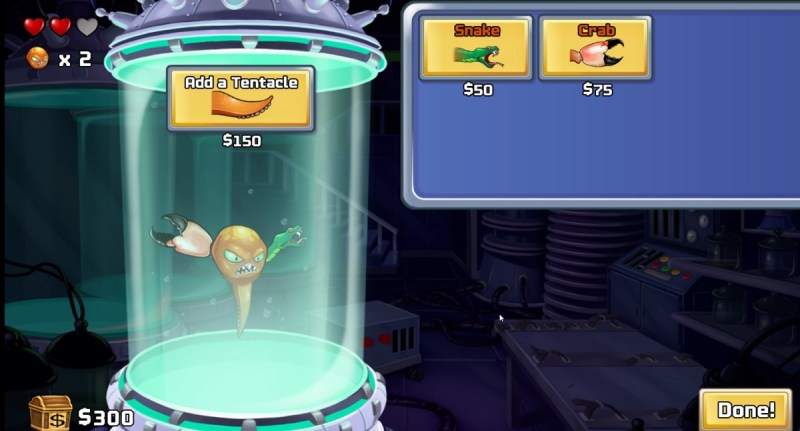 Above: Shop wisely since you only have eight arms.

As you progress, you can go to the shop and buy more limbs, and you can attach a weapon to each limb. As you move through the levels, you can pick up more DNA for new kinds of creatures and the weapons they enable.

You have the equivalent of artillery, guided missiles, and rifles. But they take the form, respectively, of chickens coughing up eggs, bees sending out guided stingers, or snakes spitting venom. Some of the animals are obvious, like the porcupine shooting spines and the penguin lobbing freeze balls. But it takes creative thinking to use snail shells and coral reefs as helmets. The frog can grab a plane out of the sky with its tongue and slam it into other planes. A firefly can send out a beam that identifies stealth aircraft. An elephant trunk can push back enemies as they approach you from all directions.

The rogue-like permadeath keeps you playing 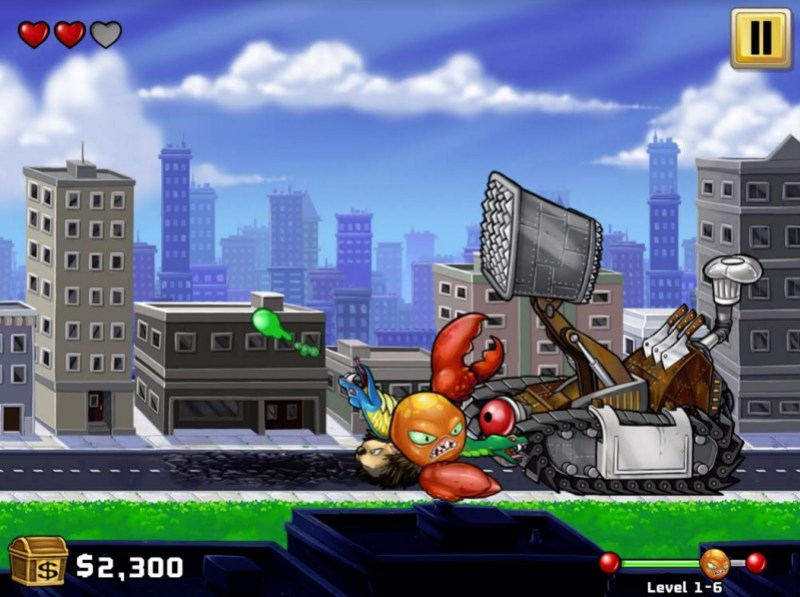 Above: Octogeddon is made by George Fan’s All Yes Good.

You get a bunch of hearts with each life. If an enemy penetrates your defenses and hits your head, you lose a heart. You can gain hearts back, but it’s unpredictable. You can also purchase more lives, but they’re expensive. And if you run out of lives before you get through all five levels, you have to start the game over again.

When you restart, you get to have access to all of the DNA you’ve acquired. And you get to spend the shells you’ve collected in the bonus levels to buy more DNA. You also get more hearts per life, and that helps you do better the next time around. As you restart the game, you can sample different weapons among the 25 supplied. That’s why the game is fun when you replay it. But it’s a constant race, where you have to improve your proficiency faster than the enemies build up their capabilities.

Octogeddon progresses from easy to hard 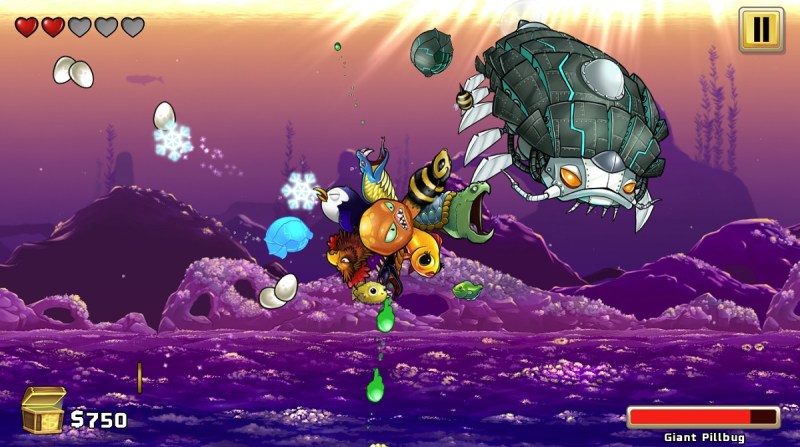 Above: Some beasts of the deep are hard to take down.

I lost a few lives at the beginning, and I felt incompetent, since it was so easy. But that’s deceptive. You add more limbs and weapons and become a wheel of destruction. But each limb gets costlier over time, and the enemies start coming at your from all directions. It becomes a frenzy as you spin the octopus to try to line up the right weapons against the hardened foes. The boss fights are tough, but they get tougher as ordinary enemies join in, forcing you to fend off simultaneous attacks from everywhere. And as you run out of lives, you get quite worried toward the end when you lose three or four lives fighting the final battle.

The final levels are intense

If you lose all of your hearts through hits to your head, you lose a life. You can earn more lives using the money you’ve accumulated over time. But they get expensive, and you have to choose between buying more tentacles or buying more lives. You earn money by taking out waves of enemies, but the objects you want to buy get more expensive as well. Each level starts out easy, but then it gets harder, as you have to take out a building at the same time you take out the enemies. And then you have to fight a boss at the end of each level. It took me around 36 hours and 13 runs to beat the game. And when I finally beat it, I felt so good. Now I’ll have to get started all over again. 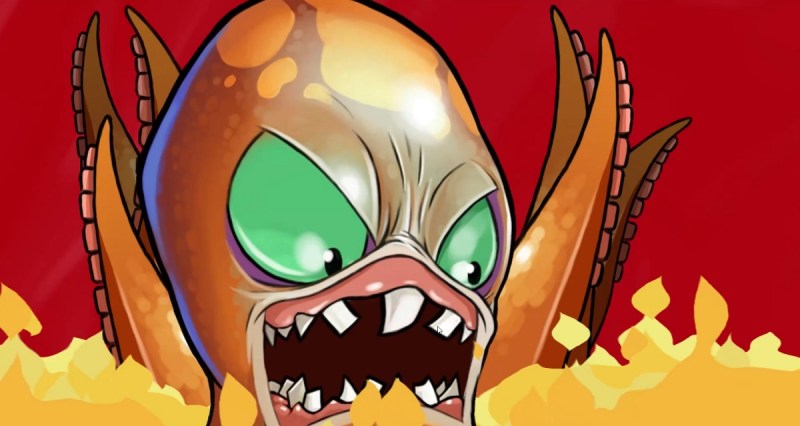 Above: Octogeddon has a temper.

The game crashed on my PC a couple of times. Fortunately, you never lose much momentum when that happens. I rebooted and it worked fine. But those crashes still happen later on, and it could be frustrating if they occur at the wrong time.

Not every weapon is useful

I bought a dolphin tail to speed my ability to spin. But I kept getting killed in early levels because that tail took up a weapon slot. I finally got rid of it, and I never looked back.

Some parts get tedious 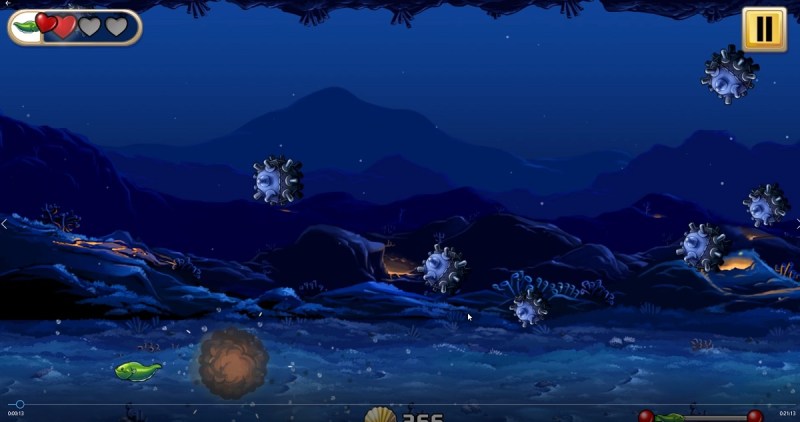 Above: You have to avoid descending mines in Octogeddon’s bonus levels.

It’s not a long game

Above: Octogeddon’s partial compendium of weapons.

If you’re a skillful player, you could finish Octogeddon’s five levels in perhaps five hours. I am not a skillful player, so I had to play it over and over again. If you lose all of your lives (which consist of multiple hearts, or damage points, per life), then you’ll lose the game. You start over and go again. But if you can make it through the levels and get to the final boss, you may not be as thrilled with the game. In other words, bad players will get a lot of enjoyment and replayability out of this game. Good players will finish it too quickly. 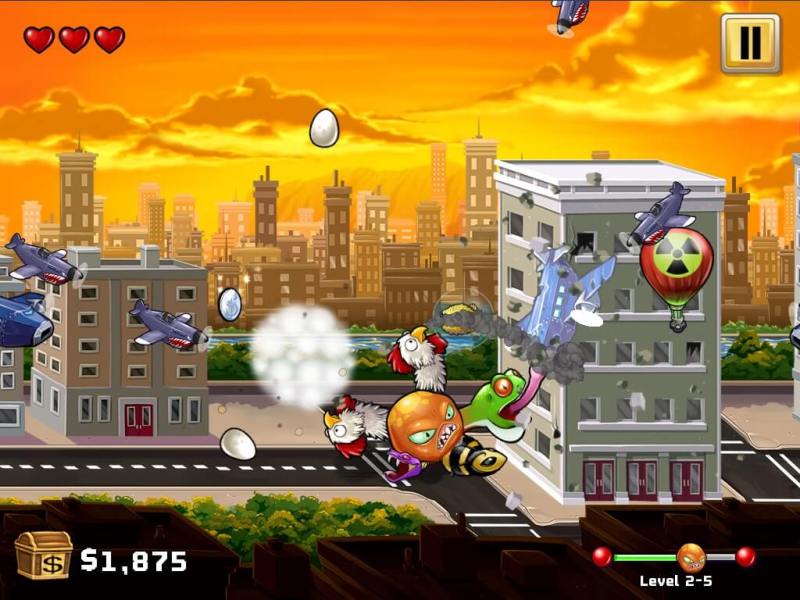 Above: The frog in Octogeddon grabs an enemy with its tongue.

The game lulled me into thinking that it was so easy. But the early levels are like a fish hook dangling in the water. Once you bite, you get into it, and then you realize that it’s not so easy after all. Every time you die, you think about how that was so preventable and you vow never to do that again. But the nature of Octogeddon’s threats is that they all hit you at once. If you are looking for one threat, another will sneak up on you and surprise you. You think that it’s so easy to protect yourself, until you can no longer protect yourself.

As it progresses, you move from overconfident to worried to intensely focused, extremely frustrated, and, finally, triumphant. Each level is structured that way, and you eventually conquer them all. I love how such a simple game, which is so accessible to everyone, can take you through a range of emotions and ever-increasing levels of difficulty. It took me around 36 hours and 13 runs to beat the game. And when I finally beat it, I felt so good. Now I’ll have to get started all over again.

Octogeddon debuts today on Steam on the PC. All Yes Good sent GamesBeat a Steam code for the purposes of this review.