When it comes to worldwide revenue in mobile games, Chinese and Japanese companies are starting to dominate the charts, according to measurement firm Sensor Tower.

Sony has a big hit on its hands with the role-playing game Fate/Grand Order, which took the top position from Mixi’s big hit Monster Strike. While the two Japanese companies slug it out, Tencent’s Honor of Kings held the No. 3 position.

Candy Crush Saga from King and Clash Royale from Supercell were the only Western games in the top 10, while Asian companies held eight of the top 10. NCSoft’s Lineage M reached No. 1 on Google Play, thanks to its huge popularity in South Korea.

Tencent’s mobile racing title QQ Speed debuted on the chart after launching in late December, hitting No. 5 overall and No. 3 on iOS. 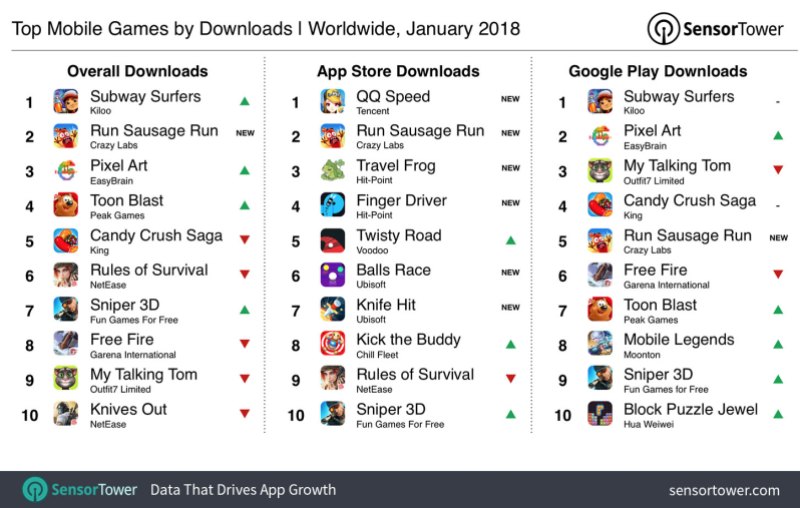 Above: The top downloads for January in mobile games.

In terms of downloads, Kiloo’s Subway Surfers took back its No. 1 rank. And QQ Speed took the No. 1 slot in the iOS app store.

Nelson noted that three overall top 10 slots were held by survival-focused “battle royale” shooters, led by NetEase’s Rules of Survival and including Free Fire- Battlegrounds (Garena) and Knives Out (NetEase). All three of these titles have begun monetizing post-launch, but none reached the top 10 for revenue.

“While we expect to see more games of this type reach the most downloaded rankings in the coming months, their current rate of revenue growth may keep them out of the very highest echelon of earning apps for the foreseeable future,” Nelson said.