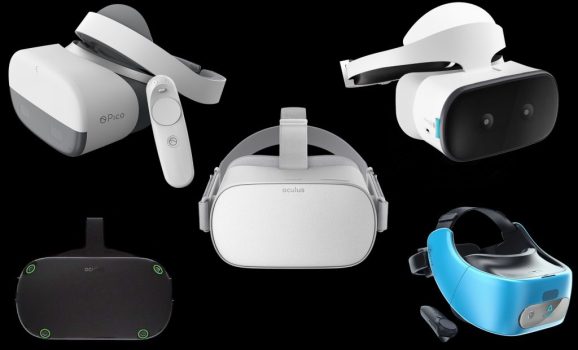 Standalone headsets represent an enormous leap forward for VR technology, with companies like Google, Facebook and HTC early to market.

An all-in-one VR headset, or standalone, puts everything in the headband needed to convince you that you’re in another world. It is a single integrated piece of hardware, like a phone or tablet.

Standalones are wireless. It is helpful to understand, however, not all wireless VR headsets are standalones. Some systems beam information wirelessly from nearby PCs or consoles, and others use wired packs that clip to clothing or slip in a pocket. Some dreamers hope a true standalone with processor, graphics, display, storage and tracking all in the headband will offer additional modes to be more flexible. So maybe you could use a battery pack for longer durations in VR, or maybe you’d use a nearby PC wirelessly for more visually impressive virtual worlds.

The first standalones vary considerably. Some only let you sit down or stand in place. Other all-in-one VR headsets let you move around more but are limited in terms of collision detection or hand controls. Eventually a system will combine great hand controls with safety features like object avoidance, but for now here’s an overview of what we know.

Keep in mind prices below aren’t exactly comparable because some include tax and some don’t.

Features: Seated or standing only, single hand controller that lets you point but not reach, LCD display.

We haven’t gotten to try this headset yet, but the incredible starting price is the standout feature. A leaked photo seems to hint at another major selling point — a robust content library brought over from Gear VR with more than 1,000 apps, games and movies.

Features: Walk-around freedom within a small space, no collision detection, single hand controller that lets you point but not reach, LCD display.

This Google-powered system adds movement freedom to Daydream apps but limits that freedom to a diameter of 1.5 meters. Everything fades to black when you step outside that space. I tried the Lenovo Mirage Solo very briefly at CES and it was nice to be able to move around. But what content works well when you can move your head around freely, but not your hands?

Features: Walk-around freedom in a 2 meter space and the option to turn the safety barrier off for larger spaces, no collision detection, single hand controller that lets you point but not reach, OLED display.

I also tried Vive Focus briefly at CES and its visuals were impressive enough to make ducking projectiles a fun and comfortable experience. If you use Focus with a MicroSD card and lots of storage, it could work well as a private movie theater for folks who travel by plane or train frequently. This also might be a common use case for Mirage Solo and Oculus Go.

This prototype headset, shown at Oculus Connect 4, is so far the best standalone experience I’ve tried. Facebook’s careful placement of cameras allow the device to occasionally see when the controllers are in awkward positions. This reduces the number of times when you might lose tracking on your hands. Oculus says it will deliver developer kits in 2018.

Features: Walk-around freedom with a default boundary set at 0.8 meters and the option to expand, two point and reach hand controllers, LCD display. Pico claims a safety boundary can also be added at the application level with collision detection.

We reviewed the earlier Pico Goblin, and while it was the first broadly available standalone it also lacked a large, well-known content store like Oculus Home or Steam to back its efforts. Pico Neo aims to again be first, this time offering two point and reach controllers in a consumer standalone. In our hands-on time at CES, we found a crisp display, but we are concerned about the quality of the controller tracking. Pico Neo will also have access to the Viveport-powered Vive Wave store, and others, to supplement content concerns for users.