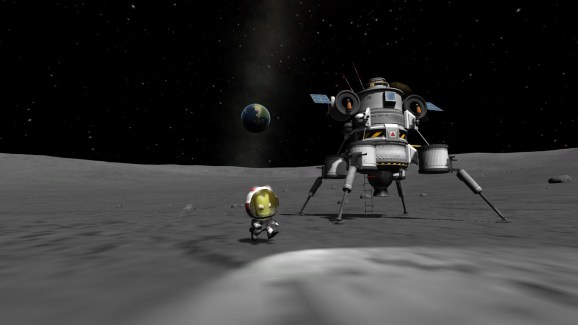 Landing on a moon in Kerbal Space Program.

Almost five years ago, Kerbal Space Program mod creator Shaun Esau uploaded his own trailer for the space-flight simulator. The video recently hit 1 million views on YouTube, and I still consider it one of the best gaming videos on the internet.

Kerbal Space Program is a physics-accurate rocket-science game where players must build vehicles to leave a planet to complete missions. It debuted as an unfinished beta on developer Squad’s website in 2011 before launching into a 1.0 release state in 2015. Last year, publisher Take-Two acquired Squad and Kerbal, and now the game is about to get its first expansion. But through all of that history, no video has captured the story of Kerbal’s gameplay better than Esau’s “Build Fly Dream.”

I asked Esau, who now works as an IT consultant in Edmonton, to reflect on the trailer and his time spent on Kerbal all these years later. He revealed that he first started working on “Build Fly Dream” after seeing the trailer for Cloud Atlas. Esau pointed out that the two videos share M83’s “Outro” soundtrack as well as a lot of the same visual language.

I also asked if he ever imagined hitting 1 million views.

“I had hoped that it would at least get some decent number of views so that it would feel more like the time I’d put into creating it was somewhat worthwhile,” Esau told GamesBeat. “But I never anticipated that the video would become anywhere near as popular as it did. Once I posted it on Reddit, it took on a life of its own.”

Esau is the primary developer responsible for the Kerbal Multi Player mod. He got it up and running, and then he worked with a number contributors to squash bugs and improve features. The KMP mod is now defunct, however, as the Dark Multi Player mod has replaced it. That new mod came along at the right time — Esau had burned out on maintaining it.

“I’ve stopped playing KSP daily, but it’s one of those games that’s hard to put down forever,” he said. “I still come back to it every few weeks just to try some new arbitrary challenge, or just to take a new approach to something I’ve managed to do before. KSP is one of the deepest sandboxes out there — the list of things you haven’t done yet is always infinitely long.”

The last thing I asked Esau was why he thought the trailer has caught on with so many people.

“I have no doubt that M83’s amazing ‘Outro’ is no small factor, but I also think that Build Fly Dream does a good job of capturing some of the things that most excite people about KSP, or even spaceflight in general,” he said. “There’s rockets and explosions, glorious achievements and glorious failures, and a multitude of beautiful & serene views on offer as well.”

I think he is exactly right. It’s easy to watch “Build Fly Dream” and assume that the music is doing all of the heavy lifting, and yes — it’s a really great song. It’s majestic and soaring, but Esau deserves just as much credit for the trailer.

The key to “Build Fly Dream” is its motion. Each shot has at least some sense of movement in it, and that kinetic energy tells the story of space flight and Kerbal.

It opens on a number of beautiful vistas and views that are only possible in space. A sunrise over Earth and on Mars, a satellite hanging precariously between two celestial bodies, and a lonely rover crawling across the dunes of some forbidden world. In each of these shots, the camera pans slowly — but you almost always have a smaller object framed by something much larger to portray a sense of velocity.

Next, the music fades from its early notes into the main melody, and we start to see what it looks like to piece these ships together. Then we see a lonely Kerbal floating through space. And then as the instrumentation returns, Esau shows us our first launch. It’s a multi-booster rocket that vibrates through the atmosphere and into space, and as it enters orbit, the Earth pans by in the background as the capsule separates from its large center core booster.

Esau then cuts back to another launch, but this time we get a closer look. The camera zooms in on the thrusters firing and shaking violently under their own power as they leave the Earth behind and then begin to explode in every direction.

This is the best part of the trailer. That shot of the rocket taking off and breaking apart as the untameable forces of nature rip it in every conceivable direction, that is the story of space flight. Rocket science is the idea of making an explosion that directs all of its energy like a focused laser. But explosions and lasers are on the opposite end of a spectrum of energy. And yet, right after this moment and as the music begins to crescendo, Esau hits us with one shot after another of flawless launches and impossibly complex space stations some how floating in perfect orbit.

Then as the drums come crashing in, Esau smashes these two ideas together with a rapid-fire succession of shots showing rockets working and rockets exploding along with the first flash of text: “BUILD” in 500 pt. font. More images of disaster and discovery. “FLY.” And then even more destruction and daring success. “Dream.”

By the time the music begins to peter out with a trailing solo piano progression, I find it hard not to get emotional as Esau finishes with a lander module setting down softly on the soil of another world and then cutting to a trio of Kerbals bouncing around and gazing up at another planet from this strange new place.

They braved every danger and failure, and they made it. And it’s damn powerful.