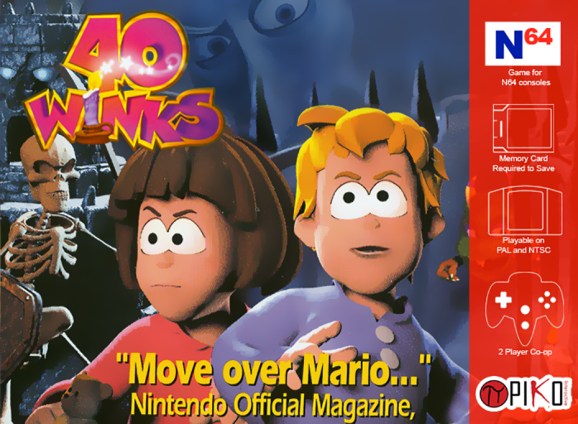 You’ve probably never heard of 40 Winks before. It’s an unremarkable 3D platformer that came out for the PlayStation in 1999. It’s also about to become a new game for the Nintendo 64. In fact, 40 Winks will be the console’s first new title since Nintendo discontinued the system in 2003.

GT Interactive always intended 40 Winks to have a Nintendo 64 port, but the publisher canceled it amid financial troubles. Infogrames Entertainment, now known as Atari, would acquire a controlling interest in GT in 1999. But now Piko Interactive, a studio that focuses on retro games and creating new works for older consoles, is going to finally bring the platformer to Nintendo’s classic system. Piko Interactive started a Kickstarter on February 12 to raise $20,000 to create cartridges for 40 Winks. The campaign has already raised over $57,000.

That might seem like a small goal for a game seeking crowdfunding. By comparison, the recent indie 3D platformer Yooka-Laylee started with a goal of about $245,000. But Piko isn’t developing a new game. Its funds are going toward things such as designing and creating packaging. The game, code and all, exists. Piko just has to put it on a cart.

But even if it’s not a massive goal, 40 Winks met it quickly. I asked Piko if this surprised the publisher.

“We are extremely surprised, but at the same time, we knew a N64 project would have the potential of something like this happening,” Piko told me.

The Nintendo 64 is a hot retro commodity right now. The system was the top-selling old console at retro gaming stores over the last holiday season. Nintendo fans (including me) are fantasizing about a Nintendo 64 Classic Edition to complement the NES and Super NES boxes from the past two years.

40 Winks is a fun project because it promises to be a new Nintendo 64 game. The idea of someone printing Nintendo 64 cartridges in 2018 is novel. 40 Winks itself isn’t really the draw. It’s not exactly a lost game, since it did come out on the PlayStation. According to review aggregator GameRankings, the platformer has an average score of about 66 out of 100. If you look at screenshots, 40 Winks look derivative of Rare platformers like Banjo-Kazooie.

But the Nintendo 64 version will have some difference over the PlayStation release. Its cutscenes will run in-game and not be pre-rendered, and it will also feature a two-player cooperative mode.

And even if it isn’t a masterpiece, the Nintendo 64 has a reputation for being a home to some of the best 3D platformers ever, including Super Mario 64 and Banjo-Kazooie. And many Nintendo 64 fans never had a PlayStation. It’s enticing to have a new 3D platformer for the system.

Piko also has plenty of experience releasing retro games. It sells cartridges for unreleased games like Mr. Bloopy Saves the World for the Super Nintendo and titles previously exclusive to specific regions, like Water Margin: The Tales of Clouds and Winds for the Sega Genesis. They even sell games for the Atari Jaguar.

Above: It’s not a N64 platformer without talking heads.

40 Winks is the company’s first Nintendo 64 project, and it’s also the company’s first Kickstarter. Now that it’s met its goal, crowdfunders can help meet stretch goals. At $60, those who pledge the $100 tier or more will get a special 40 Winks Nintendo 64 controller. Passing $125,000 will unlock a special 40 Winks Nintendo 64 console, while $250,000 will have Piko working on a Dreamcast version of the game. Both of those items would be available as purchasable add-ons for backers.

You need to spend at least $40 on the campaign to get a cartridge of the game, but that’s only the cartridge. Spending $55 gets you the complete box.

If that seems like too much money for you, pledging $8 will give you a digital code for an eventual Steam release of 40 Winks. But where is the fun in that?