Unity Technologies is spending more time and money delivering its message to game developers during the upcoming Game Developers Conference, but it will do so without a booth at GDC.

The GDC is expected to draw more than 26,000 attendees, and Unity says it continues to support the event as a platinum sponsor and seven talks on the agenda. But Unity — which powers more than 50 percent of all games with its game development engine — wants to make more noise and engage with developers in a more intimate way, said Clive Downie, chief marketing officer at Unity, in an interview with GamesBeat.

Downie said that games and experiences made with Unity reached more than 3 billion devices worldwide in 2017 and were installed more than 20 billion times in the last 12 months, but he said many people in game development aren’t aware of that.

“Making games isn’t getting easier, and that’s understandable, as it is a creative pursuit,” Downie said. “We’re building technology for anyone making games, from the hobbyist venturing out for the first time to Triple-A titles. We are evolving how we are reaching those people.”

It’s a scrappy marketing plan that will drive up Unity’s marketing budget in 2018, compared to 2017. But it also runs the risk of annoying those who want the GDC to be the center of attention.

Above: Unity’s plans for GDC

“We are not going to have a booth in the expo,” Downie said. “We will make it as easy as possible for as many developers attending to experience everything we are doing, depending on how they want to experience it. Some developers can’t afford the price of the GDC. We respect the GDC. We are a platinum sponsor. We are not moving away from supporting the show. We have talks at GDC. We want people to be able to engage with us outside of the noise of GDC.”

Unity will hold a week-long series of events with more than 100 sessions at various locations, including its own multistory headquarters, which is just a block and a half from the Moscone Center, where GDC will be held in San Francisco. Downie said Unity will open its headquarters to developers, including those who can’t afford a $2,000 all-access GDC pass. Visitors will have to register, but they do not need a GDC pass to attend the events at most of Unity’s venues.

The idea is to get the staff at the headquarters — including hundreds who work on the company’s flagship game engine — to network, share knowledge, and engage with game developers who are the primary users of the tools.

As for not having a booth, Downie said, “It’s not an economical decision. This plan is costing lots of money. Our principle is to have a greater connection with more people. They will leave GDC with more knowledge of what we are doing.” 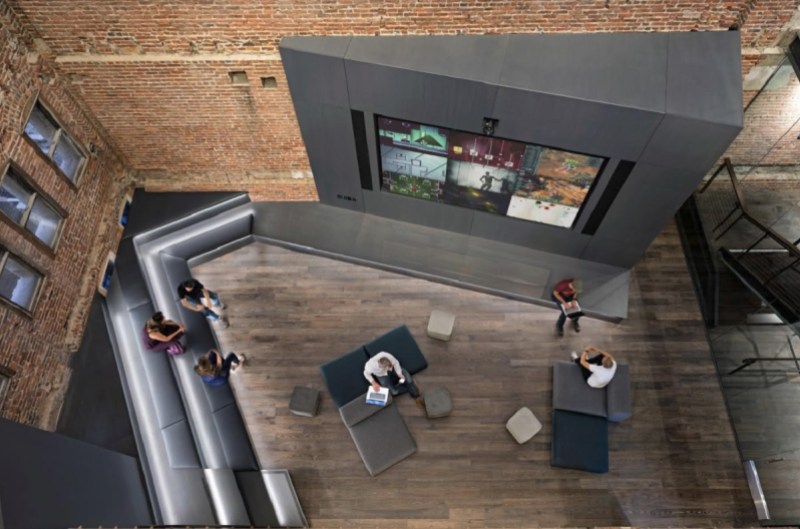 Above: Unity’s headquarters will host hundreds of sessions during GDC.

Downie said the company will participate in GDC as a big sponsor, through both regular and sponsored talks. It will also have a lounge inside the GDC where attendees with badges can go to relax and watch streamed talks. But Unity will also have a presence outside the GDC to get its message across.

It will hold a keynote speech hosted by Unity CEO John Riccitiello at The Village venue on March 19 at 630 p.m. Unity will emphasize how its tools are being used by industry artists to create some of the best-quality games in the industry, Downie said.

At the company’s headquarters, Unity will hold lots of sessions — big and small — on various aspects of game development. Many of those sessions will be hosted by Unity’s 500-person engineering team. It will host a mixer for Women in Gaming. Sign-ups for sessions will start on March 1.

Unity will also operate a lounge at the Hotel Zetta, a short walk from the GDC, where developers with or without badges can unwind with colleagues and Unity employees.

Downie said that some of Unity’s top evangelists will also hit the streets and show demos to developers as they traverse the area around the GDC. And Unity will hold a party for around 2,000 people at The Village, with a special announcement pending. Unity is also going to stream everything it is doing so that those who are not going to the GDC can also enjoy it. It’s all about “democratizing game development,” Downie said.

As for Unity’s headquarters, Downie said, “We’ll trick the building out, where you can see demos and talk with small groups.”