Crossing Souls is an action role-playing game that’s in love with the ’80s. It’s strewn with references to The Goonies and Back to the Future, and its cutscenes and soundtrack do an excellent job at surfing the nostalgia wave.

Indie developer Fourattic raised funds for the game on Kickstarter in 2014. Four years later and with the help of publisher Devolver Digital, Crossing Souls is out now on PC (which is what I played it on) and PlayStation 4. 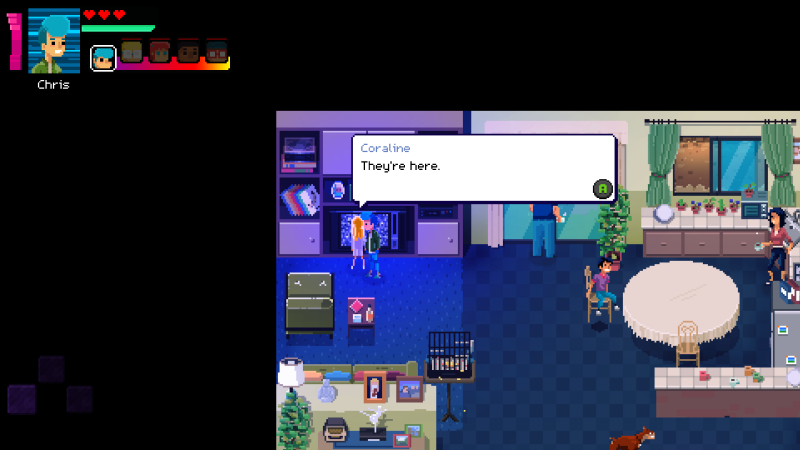 Crossing Souls has a comfy aesthetic. It’s a nostalgia trip back to the ’80s, starring a scrappy group of kids who find themselves in over their heads when they find a mysterious stone that lets them peek into the spirit world. Of course, some paramilitary group of baddies are also after the stone, and of course, it’s up to our young heroes to save the world.

Most of the game has a retro pixel art style, but notably, the cutscenes have a low-fi cartoon look complete with static lines as though you’re playing on a dusty old VCR. To match, the soundtrack is synth-y, period-appropriate goodness.

As a package, Crossing Souls looks great and hits all the locations you’d want from a game like this, such as an arcade, a comic book shop, the local high school, and a spooky mansion. You play as one character at a time, and each of the kids has a different skill set — Matt wields a ray gun and has rocket boosters; Joe can drag objects around and tanks with powerful punches; Charlie has a whip and can slingshot the party across wide ravines. The protagonist Chris is a little vanilla to be sure (he wields a bat and can jump and climb) but he rounds out the group.

I enjoyed switching between characters to complete tasks. The puzzles aren’t that challenging, and neither are the fights. But it’s all simple fun. Plus, if you play too fast and loose, you then might find yourself in a tight spot. You won’t encounter many health restoration items, and you can’t level up your characters or give them new abilities.

My favorite sequence is a scene in which you’re running from left to right on the screen to escape a wall of flame. You must get to safety by toggling between Matt and Chris and timing your jumps and rocket boosts so that you don’t run out of stamina.

Crossing Souls also features some delightful minigames. In one, you pilot a ship and dodge bullets and missiles. In another, you avoid obstacles as you escape the bad guys. 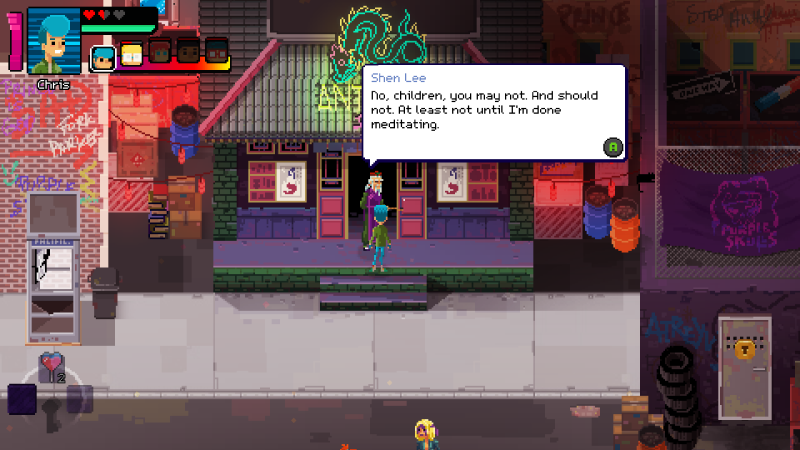 Crossing Souls’s ’80s callbacks are sometimes cute — like the Poltergeist house — but other times, they felt awkward. It’s peppered with stereotypes from that time period like the effeminate bad guy and the mystical Asian antique shop owner. It often relies on tropes without elevating them or reexamining them in a modern context, the way a show like Stranger Things does.

The main problem with the story, though, is that we never get to know the characters. They’re archetypes: the nerd, the girl, the heroic protagonist, the one friend who is a person of color. Because of that, dramatic moments lacked emotional resonance. Even the characters themselves simply pause before moving on as though nothing’s happened. Without any psychological realism or notable character development, it’s hard to relate to these kids or see them as anything other than 2D cartoony homages.

Significant plot revelations are also missing from the picture until about two-thirds of the way through. The big bad, Major Oh Rus, makes moves that keep the kids on their toes, but it takes a long time before we learn more about how Egyptian mythology fits into the big picture. And once we do find out, the story ignores some of the more interesting existential questions that arise. 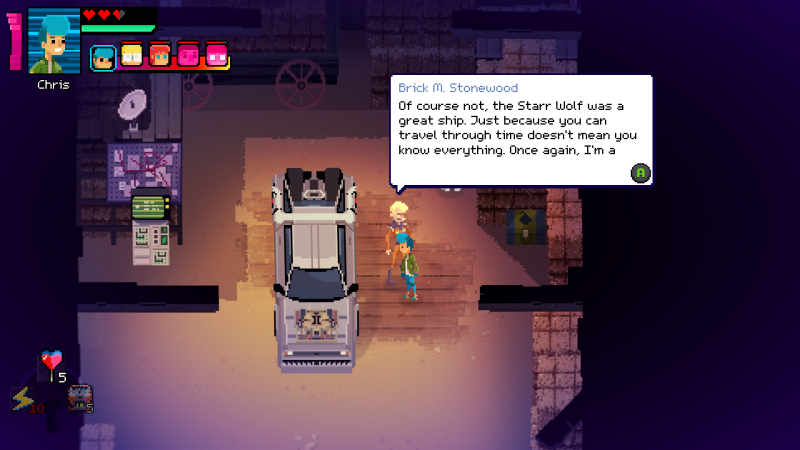 Crossing Souls doesn’t set out to be a head scratcher with its puzzles, but I was still disappointed by how simple and repetitive they were. Most of them involve switching between the ghost world and the living world to flip switches and open up new paths forward. In one scenario, you’re simply going back and forth between various NPCs to trigger dialogue so you can advance.

I also wish that the character-switching was more useful. The characters’ special abilities didn’t come in handy that often, and I think I may have only used Charlie’s slingshot skill a total of three or four times.

When you peel back the aesthetic, though, Crossing Souls is a little disappointing. I wish they had done something more with the ’80s setting beyond just sprinkle in a few references here and there. It’s cool that Egyptian mythology plays a part in the story, but it felt tacked on.

This is an ambitious undertaking for a tiny team like Fourattic, and I appreciate the effort. It’s enjoyable to run around Crossing Souls’s 1986 world and whack some evil ghosts with a baseball bat. And the ending, while a little corny, is genuinely kind of sweet. Even though the story is thin and the puzzles are a bit too simple, it’s a game with a lot of heart.

Crossing Souls launched on February 13 for PC and PlayStation 4. The publisher sent us a code for review.