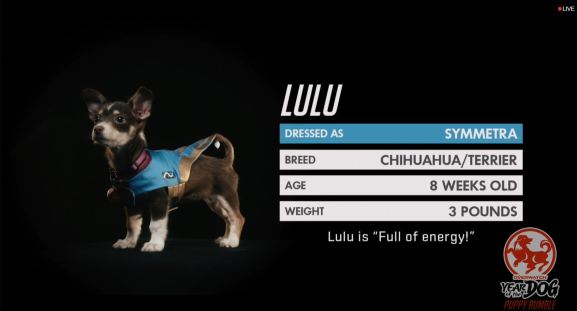 Lulu dressed as Symmetra from Overwatch.

You probably like Overwatch. You probably also like puppies. Well, Blizzard has finally combined those two things into one stream is live now on Twitch.

To celebrate the Lunar New Year and the Year of the Dog, Blizzard has introduced new events and content into its team-based hero shooter. And the publisher is using this as an excuse to play with a bunch of puppies. On the official PlayOverwatch account on Twitch, you can check out the “Year of the Dog Puppy Rumble” right now. It has full commentary and everything.

I know everyone is rooting for the 8-week-old Lulu, which is dressed like the Overwatch hero Symmetra, but I’m hoping that Blizzard uses this as an excuse to introduce a new character by letting a cat loose in the Puppy Rumble stadium dressed as someone else completely.