Zoink’s Fe is a gorgeous reverie, awash in beautiful colors and accompanied by a soundtrack of soulful strings. You play as a small animal, fox-like in movement and appearance, who’s on a journey to save the forest from strange menacing creatures called the Silent Ones. It’s a stunning adventure, filled with breathtaking moments that remind you how small you are in the grand scheme of things — but also how you can work together with others to make a difference.

Fe is the first game to launch out of EA Originals, Electronic Arts’s indie program, and it’s out now on PC, Xbox One, PlayStation 4, and Nintendo Switch. I played it on the PS4, and if you do play it, I’d recommend a big screen so you can best appreciate its captivating vistas. From screenshots, you can see Fe is beautiful. Each biome has its own color palette, and as you run through the underbrush, navigate mysterious caves, and clamber to the tops of trees, the light changes in bewitching ways. The world around you is prismatic, reflecting the sunlight with surprising pops of color and texture. A dark tree trunk becomes studded with glowing reds and oranges when viewed a certain way. A snowdrift becomes a study in pointillism.

Fe also features a lush soundtrack, starring a cello, viola, and violin. The music is cozy and playful at times, reminding me of games like Unravel. When you come face to face with the grandeur of nature, though, it swells to truly epic proportions. A particularly fantastic scene is when you discover an enormous creature, part stag and part moving forest. As you spring from tree to tree up the animal’s body, the music crescendoes to anthemic heights. 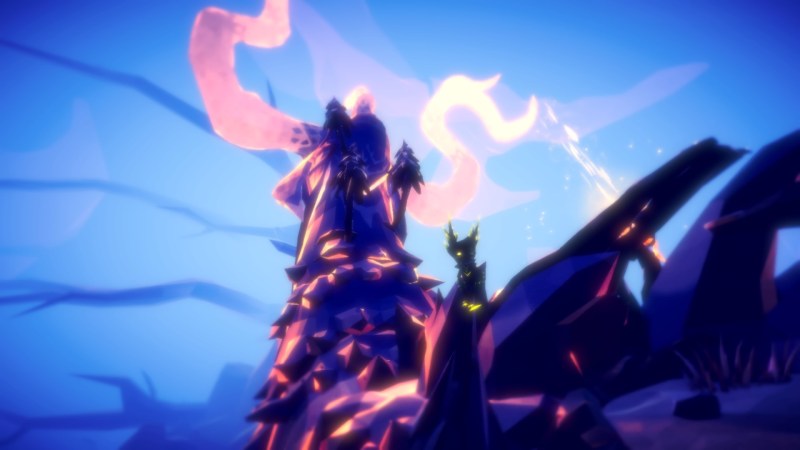 The giant animals you see are breathtaking. It brought me back to the first time I played Shadow of the Colossus, except this time rendered in the colors of the dawn: pinks, purples, and blues. Fe succeeds at portraying a sense of scale, from the larger-than-life creatures to the tiny lizard compatriots that are more or less your size.

Freedom of movement also contributes to this sense of scale. When you’re floating around atop spinning yellow flowers or climbing up spirals of stone so you can glide down to another platform in the distance, you feel as though you’re a tiny critter in a vast forest. Nothing punctuates this more than when you climb to the top of a tree, perching at its apex and viewing the misty valleys before you.

This also makes the struggle between you and the Silent Ones feel particularly heroic. The enemies are tall, with ominous glowing eyes. Sometimes they’re accompanied by attack dogs that are more than five times your size. 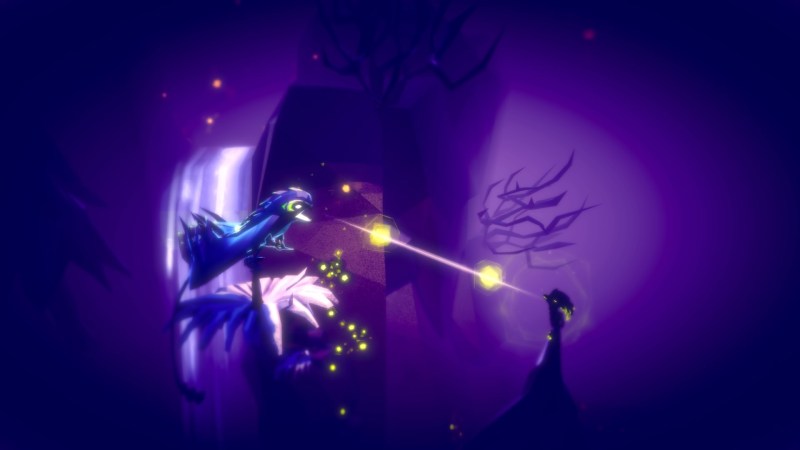 Most of Fe’s gameplay is platforming and stealth. You’re often traversing the landscape and solving environmental puzzles while avoiding enemies. The player-creature controls well, and it’s great fun to dodge and weave through the grass and swing from the trees.

My favorite mechanic is how you communicate with other creatures in the forest. You can unlock skills by collecting gem-like fragments, but as the story progresses, the main abilities you acquire are by learning to speak different languages. I love that the game tells you to “sing gently with animals,” which is a charming sentiment.

When you encounter another creature, you can gently press on the right trigger button to speak to them. Depending on how hard you press, the tone of your voice changes. You have to essentially tune into the right frequency to communicate with that animal, and once you do, a kind of understanding passes from both of you. Once you’ve formed this bond, they help you in your quest. And when you learn their language, you can use it to activate certain things in the environment — like coaxing a flower into blossoming so you can use it as a springboard to jump to a high ledge. 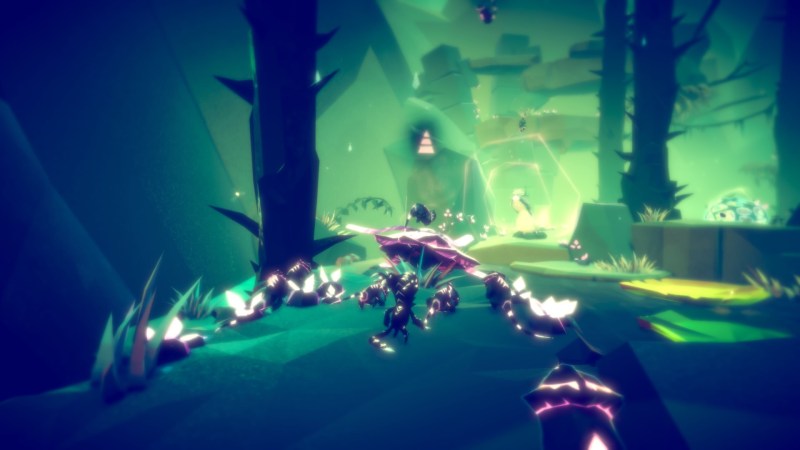 It took me a little while to get used to the way the camera automatically pans in and out or drifts in a certain direction, and when I first started playing, I felt motion sick. Though I eventually got used to the camera, it sometimes became a hindrance during areas where stealth is key.

Because waiting for the right time to scamper forth from your hiding place is so important, it’s unfortunate that the camera sometimes works against you. You’ll likely get the hang of its quirks early on, but sometimes it will frustrate you. 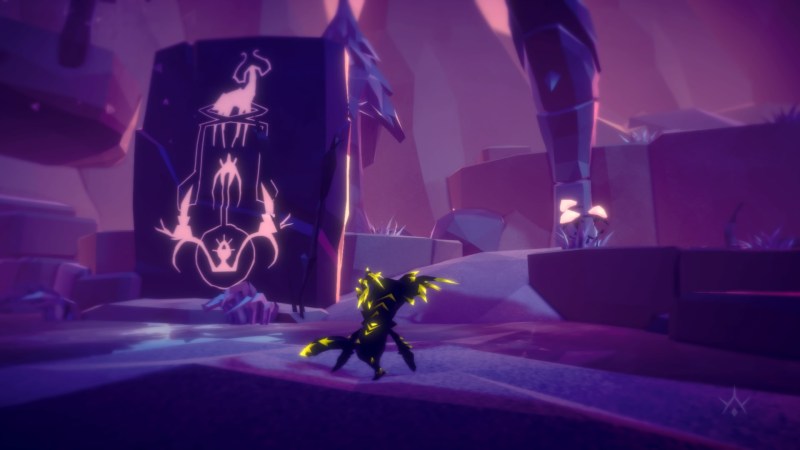 I liked that Fe has no words, its story told in mysterious glyphs and the language of animals. But sometimes the glyphs were a little too mysterious. About two-thirds into it, I still wasn’t sure what was happening or what the enemies were trying to do. Fe relies on the instinct to want to save forest animals — which, I admit, is quite strong, especially when they’re so cute. But I wanted more from the story.

I think it’s OK for a story to be somewhat inscrutable. After all, Fe takes place in a beautiful alien world with giant owl-like snakes and neon flowers. By the time I got to the end, though, I still felt like I didn’t really understand the Silent Ones’ motivations. 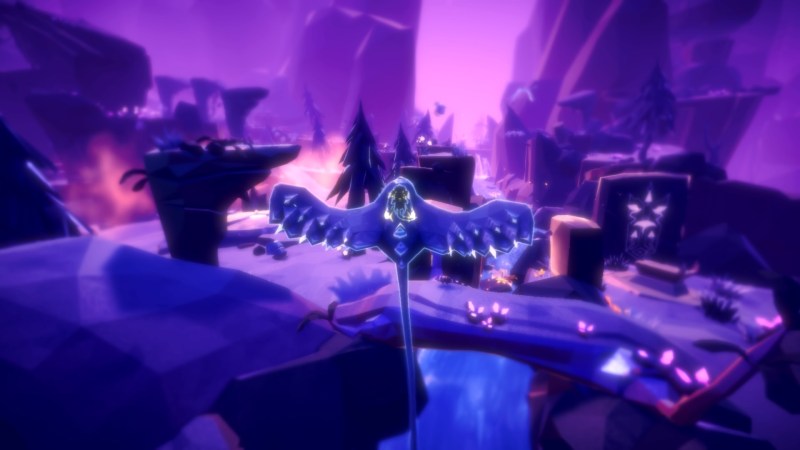 Each of the biomes is beautiful and characterful and a joy to experience. However, I couldn’t help but feel like my exploration wasn’t always rewarded. It seems the only point of exploration, really, is to get all the collectibles — spinning pink gems that can unlock abilities.

The other collectible is a set of stone tablets, and each reveals a glyph that explains part of the story. But many of these repeat, perhaps to make sure you get as much of the story as possible even if you pass up collecting most of them.

The result is that, though Fe’s world is beautiful and mysterious, you often won’t find any secrets or anything new as you dig deeper. All the animals you encounter in the main story seem to be it, and unless you want to finish 100 percent of Fe, it doesn’t seem like further exploration would yield much else.

Fe stumbles at times, in part because of its sometimes elusive camera. But it’s memorable and beautiful, worthwhile simply for diving into an alien world and letting it carry you away with its sometimes adorable, sometimes breathtaking creatures.

If you can get past some of its flaws, you’ll be in for an experience that’s full of wonder with fantastic visuals and an amazing soundtrack. Which I keep looking for online, by the way. But my search queries just keep returning discussions about Fire Emblem.

Fe launched on February 16 for PC, Xbox One, PlayStation 4, and Nintendo Switch. The publisher sent us a code for review.