Nintendo had spectacular growth in 2017, with revenues growing 172 percent to $9.2 billion from a year earlier. That’s good enough to push the Japanese publisher and hardware maker into the top 10 gaming companies by software revenues after a three-year absence from the list, according to market researcher Newzoo.

But Newzoo estimates that Nintendo has a $2.5 billion opportunity to grow revenue via subscriptions, in-game console transactions, and mobile games. Nintendo is pursuing those options, but the percentage of revenue it gets from them is much smaller than its peers.

“Most remarkable is that Nintendo generated these revenues with hardware and full-game sales only,” Newzoo said in a press release. “The contribution to revenue from its smart-device business (responsible for Nintendo’s mobile games) is negligible at 3 percent of all gaming revenues while subscription revenues and revenue from in-game transactions are almost non-existent.”

Nintendo has never had much luck in the online games business. In this sense, Nintendo remains a traditional gaming company in an industry that is rapidly changing, not in the least by adopting the games-as-a-service model, Newzoo said.

Subscription revenues have been very strong for Sony and Microsoft while in-game transactions are the main growth driver for dominant Western publishers, such as Activision Blizzard, Electronic Arts, Take Two Interactive, and Ubisoft. In Japan, Konami, Bandai Namco, and Square Enix are shifting focus to mobile games, which are hugely popular (and profitable) in their domestic market. 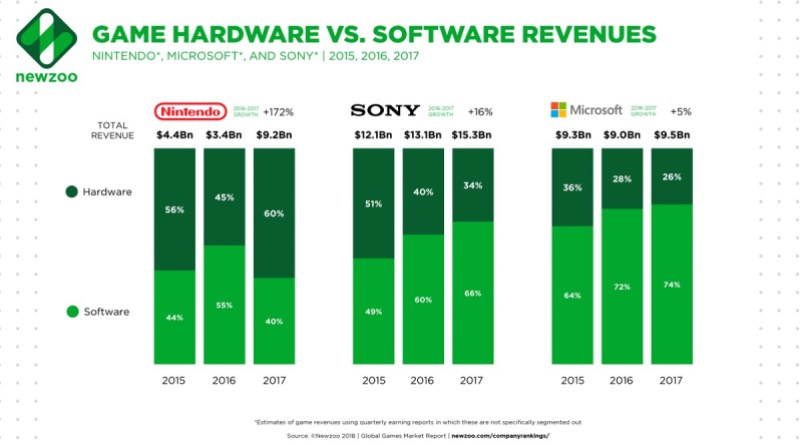 Above: Nintendo makes a higher percentage of revenue from hardware than its peers.

The share of Nintendo revenues from digital products and channels is only 16 percent, far lower than most of its peers. The industry average share of digital revenues for console game software in 2017 was 66 percent, up from 58 percent in 2016. The future for Nintendo surely is also digital, and therefore, there are three obvious areas to focus on, Newzoo said.

Now that the Switch has successfully launched, 2018 could well be the year that Nintendo succeeds in making serious progress in the untapped areas of subscriptions, in-game revenue, and mobile, Newzoo said.

The upcoming Mario Kart Tour for mobile devices and announced launch of Nintendo Switch Online in September 2018, make it clear that Nintendo wants to grow this business.

In 2017, Nintendo’s hardware revenues grew by 266 percent from a year earlier, hitting $5.5 billion, and 48 percent of these revenues were earned in Q4 2017. This is more than both Microsoft and Sony, who earned $2.billion and $5.1 billion respectively, with hardware.

Nintendo has a higher ratio of hardware revenue in part because of the stage of the hardware cycle: Nintendo launched a new console in 2017 while Sony and Microsoft launched upgraded versions of their current generations. And the Switch is hot.

This year, the Switch also has a strong lineup of new game releases — and not just games published by Nintendo itself. The Switch’s success has caught the attention of third-party publishers, who are eager to port their games to the console, Newzoo said. Finally, if Nintendo were to release the confirmed Pokémon game for Switch in 2018, it would be the first core Pokémon game ever released on Nintendo’s TV console with a very high chance of becoming another blockbuster hit.

In mobile, both Super Mario Run and Animal Crossing: Pocket Camp were among the most downloaded games in Q4 2017, but revenues from both titles were low. In its latest reports, Nintendo confirmed that player retention — and thus monetization — were the key challenge for its mobile games. 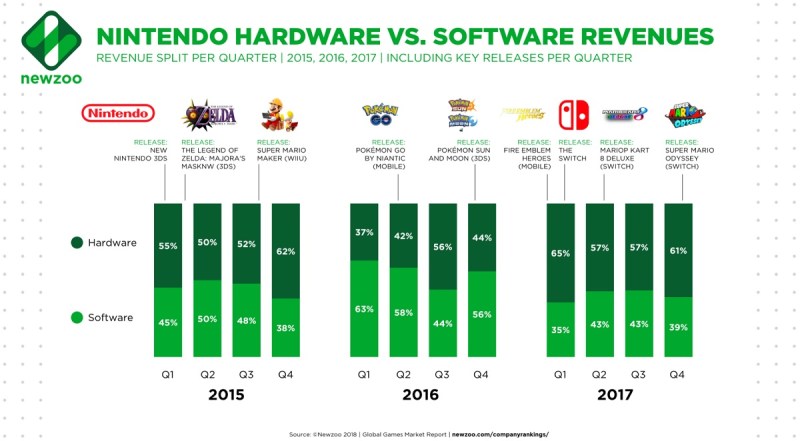 Above: Nintendo’s percentage of revenue from hardware has grown.

It is clear that Nintendo is still figuring out its mobile gaming strategy. For example, Super Mario Run was not intended to receive any updates, yet updates have come out, and downloads spiked when that happened. Regularly updating games and adding content is key to player retention for highly successful mobile franchises, such as Candy Crush and Clash of Clans.

Nintendo has also been hesitant to embrace free-to-play games with in-game transactions, the dominant business model for most successful mobile games. However, the fact that Nintendo’s least-marketed game on mobile, Fire Emblem: Heroes, was responsible for 80 percent of all Nintendo gaming revenues using in-game transactions will surely not be lost on Nintendo executives, Newzoo said.

Nintendo is the last of the three console companies to offer paid online gaming. Online multiplayer is currently free for a selection of Switch games, but that is expected to change once Nintendo Switch Online launches in September 2018. The PlayStation Store and PlayStation Plus as well as the Microsoft Store and Xbox Live are hugely profitable for both Sony and Microsoft.

Similar to its mobile strategy, however, Nintendo seems reluctant to fully embrace the subscription model. The announced price for its online gaming service is far lower than its competitors. Nintendo will charge $20 for a full year, compared to $50–$60 per year for both Sony and Microsoft.

The key challenge for Nintendo is that successfully moving from a traditional approach to development and marketing to running games as a service will require organizational change. That is exactly why it took traditional publishers like EA and Activision years to catch up with the new business model and marketing tactics pioneered by more nimble mobile and PC gaming companies.