South Korea’s largest mobile provider — SK Telecom — announced today that it will debut “social virtual reality” and multiple 5G demonstrations, including “hologram AI,” at its 2018 Mobile World Congress booth next week. The demos will run from February 26 to March 1 in Barcelona, Spain.

Illustrating the gulf between 4G and 5G speeds, SK Telecom will show how virtual reality improvements will evolve its existing Oksusu service, which lets Korean users chat while watching videos together. Oksusu Social VR will use Samsung’s Gear VR and Google Daydream to display 80-inch-equivalent 1080p TV screens alongside virtual avatars of users and their friends and will include body movements and facial expressions. Users of the 4G VR service will be able to watch and comment upon movies, League of Legends games, concerts, and sports as if they’re watching the content together on a TV.

By comparison, the 5G version of Oksusu Social VR will include 8K videos with 16 times as much detail as the 4G version, as well as the ability to be instantaneously streamed live from far-off cities, making users feel as if they’re actually visiting foreign destinations and attending live concerts. SK Telecom explains that this sort of real-time VR is not feasible over 4G because of the limited speeds of existing networks, but will be possible over 5G. 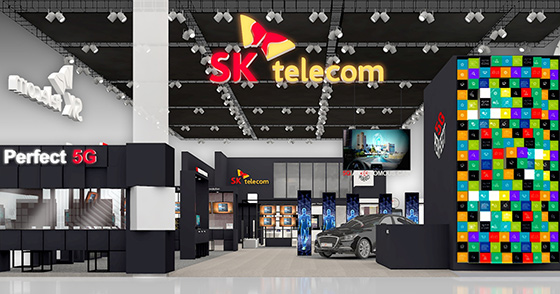 Intriguingly, SK Telecom also promises Mobile World Congress visitors “a glimpse of the future of AI” in the form of “hologram AI.” Without providing specifics, the carrier claims that hologram AI offers the opportunity for “mankind to have a completely new mobile communications experience.”

Last April, rival carrier KT and Verizon conducted the world’s “first 5G live hologram call,” wherein a Verizon employee appeared as a hologram on a monitor at KT headquarters. KT said at the time that commercial 5G networks will enable life-sized real-time holographic meetings between people, and SK Telecom has similarly suggested that holograms will be a major new benefit of 5G.