Although Apple’s gaming track record has largely rewarded enthusiasm with disappointment, a new Apple TV trademark application discovered by Patently Apple indicates that the company is still interested in video games. The application, which Apple filed last week, expands the use of the Apple TV name for video game purposes — nothing else.

The application is noteworthy because Apple’s original 2007 trademark for the first Apple TV covered computer hardware and set top boxes focused on photos, music, and videos, excluding games entirely, and no change was made when it debuted the fourth-generation Apple TV with app and game support in September 2015. Last year’s Apple TV 4K trademarks were similar, only briefly mentioning “computer games” among many other functions of the wireless black box. By comparison, Apple’s new filing is devoted to Apple TV video game console and video game controller uses, which is unusual given that interest in Apple TV gaming is at a nadir. 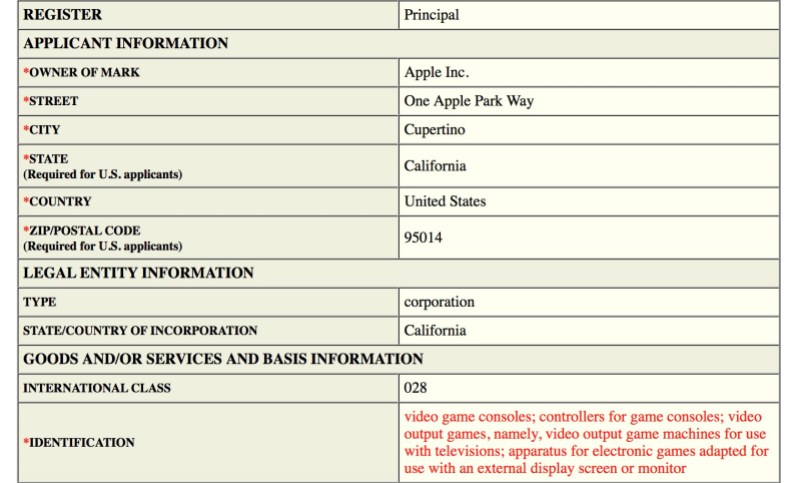 Expensive by trademark standards but a drop in the bucket for Apple, Apple’s $16,000 international filing covers over 60 different countries across Africa, Asia, Europe, North America, and South America. Also interesting: The gaming-specific trademark filing appears to have been in the works for some time. Apple quietly filed a preliminary application last August in Jamaica, a country with a trademark office that cannot be searched online. Due to international reciprocity treaties, filing first in Jamaica enables Apple to plant its trademark flag early and privately, then expand the filing internationally whenever it’s comfortable going public.

This isn’t the first time Apple has publicly pushed the Apple TV for gaming purposes. The aforementioned fourth-generation Apple TV added the ability to play games, leading experienced gamers (including us) to hope that Apple would grow past its questionable gaming legacy. Unfortunately, Apple angered game developers by requiring them to support the new Apple TV’s limited Siri Remote as a controller rather than letting games solely use dedicated gaming controllers. Developers soon stopped launching games solely for the Apple TV and retreated from initially higher Apple TV game price points as well.

However, gaming has been wildly successful for certain developers on iOS devices: Games are among the most popular downloads in the App Store, which has generated $70 billion for developers since 2008. While game developers rarely if ever launch AAA console titles on iOS, games such as Minecraft and “freemium” titles with in-app purchases have been popular on iPads, iPhones, and iPod touches. Still, relatively few developers have brought their iOS hits to the Apple TV, as sales of the device have fallen below expectations.

Apple has recently embraced the potential of augmented reality gaming on iOS devices with the release of ARKit software development tools, going so far as to publicly refute claims of modest and slowing developer interest in AR. In light of Google’s apparent recent interest in developing a gaming platform, it’s possible that Apple’s competitive instincts may be kicking back in — though possibly too late to make a difference this time.