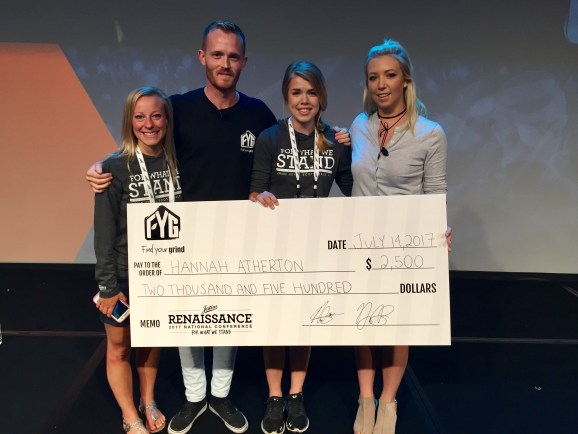 Hannah Atherton receiving a scholarship from Find Your Grind.

Find Your Grind (FYG) has partnered with esports platform ReKTGlobal to create a scholarship program for students and others who want to pursue esports. Each year, the two will be offering $450,000 through the program, which focuses on high school students but is open to anyone.

FYG founder Nick Gross says that esports aptitude isn’t a prerequisite for applicants. Instead, the program is searching for people who have “identified a purpose and a direction” and demonstrate a passion for competitive gaming. ReKTGlobal will also be connecting recipients with folks in the industry and professional players. The scholarships aren’t earmarked for any particular purpose; when students receive one, they can use it for anything, such as college tuition or buying computer equipment.

In 2017, the organization began offering several different types of scholarships aside from esports. It started out focusing on music, art, and technology awards and programs. It has teamed up with Will.I.Am’s I.Am.Angel Foundation, which helps prepare kids for college and provides scholarships.

Through a partnership with memorabilia company Jostens, FYG is on tour until April to speak to high school students about opportunities in creative fields.

“Think Tony Robbins meets Vans Warped Tour,” said Gross in an email to GamesBeat. “We’re really trying to break the mold of ‘the perfect grades equals the perfect college equals the perfect life.’ At each of the events this year we’ve elected two students who embody our scholarship principal of ‘stories not scores’ — our scholarship program supports the kids who have identified a purpose and a direction by helping them take that next step. ”

ReKTGlobal specializes in esports infrastructure, such as building venues for competitions and bringing esports events to conventions. FYG partnered with it to help strategize and execute the new esports scholarship. ReKTGlobal will also be guiding the organization in future events and membership programs.

“I became an investor [in ReKTGlobal] last year, and during every FYG tour stop the No. 1 request we’d get are that the kids wanted to learn more about esports/gaming,” said Gross. “90 percent of kids these days are about playing or watching esports/gaming, so this was a void that was missing which REKTGlobal helps fill.”

FYG’s new program doesn’t just award folks who want to play esports. It also offers other scholarships geared toward various gaming-related disciplines, such as cosplaying, concept art for games, and esports commentating. And though it’s previously focused on encouraging high schoolers to pursue creative opportunities, Gross says that they decided to open up the esports scholarship to everyone. He says that by taking applications for a wide array of skills as well as from various demographics will encourage diversity in the industry.

“We wanted [the scholarships] to be available for the entire esports ecosystem, whether you’re a 30-year-old aspiring gamer or a 14-year-old cosplay fanatic,” said Gross. “It’s important that we open this up to the entire community and not just limit it to high school students.”

Esports is slated to hit $906 million in revenues this year, according to market researcher Newzoo. And the audience will continue to grow — the analyst predicts that esports fans will grow to 250 million strong by 2021.