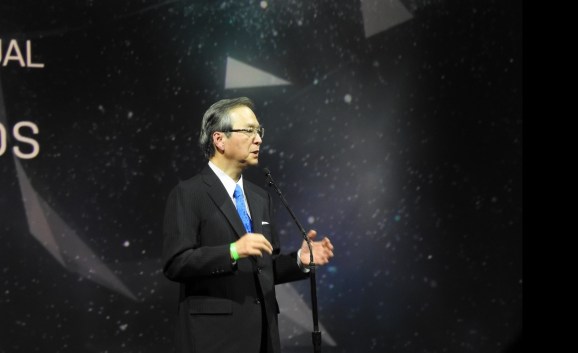 Takeda was honored for his work on generations of Nintendo game consoles, including the Nintendo 64, GameCube, and the Nintendo Wii.

He was formerly general manager of Nintendo’s Integrated Research & Development division, and was the co-representative director and technology fellow until he retired in 2017. He joined Nintendo in 1972 was started his work in R&D in 1981.

He was a game designer, creating things like the save system for The Legend of Zelda. He also created games such as Punch-Out! and StarTropics. And he made Nintendo’s first arcade game, EVR Race, in 1975.

He thanked Hiroshi Yamauchi, the now-deceased longtime CEO of Nintendo.

“He trusted me and gave me the opportunity to lead the technology effort at Nintendo,” Takeda said.

Humbly, he said he accepted the award on behalf of all of the engineers who worked on hardware consoles at all companies throughout the industry.