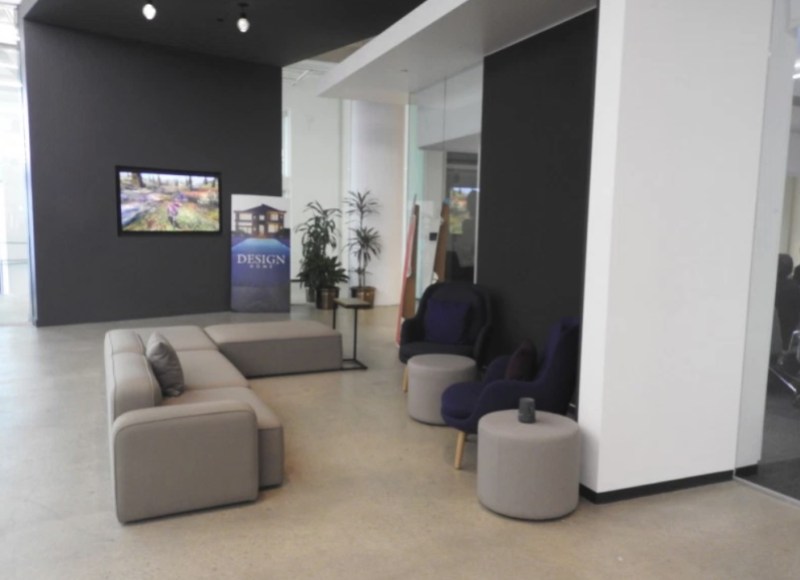 Above: Glu’s new headquarters covers a couple of floors in a San Francisco building.

Akhavan: Beyond the new games we’ve talked about, we also have a lot of prototyping efforts across the company, which used to not happen at all. In the past we would have a studio put together a Powerpoint: “I want to make this game.” “Okay, go ahead and spend the next 18 months making that game with no prototyping or exploration phase.” Now we have many active prototyping efforts underway.

Earl: For new games and just for new features in existing games. It’s been a real change here. Again, that’s part of the process that makes sense for the creative company that we’ve become. In the future, that’ll just be table stakes, but right now it’s been a big change.

GamesBeat: Do you feel like you can breathe a bit of a sigh of relief at the moment?

Earl: Yeah, I can, and that’s not around the fiscal results, although they were great considering that we were intending to have a major loss last year from a non-GAP perspective. We ended up basically breaking even. I celebrate the cultural change, and the fact that the company — the company came up with the cultural change. We all worked together and we’ve adopted it with such alacrity. That’s what I celebrate.

With that said, there’s no rest for us. We’ll power on. We have a lot of work to do here to turn this into a bona fide successful company. But this year is a year where we’ll post significant profitability, and next year, as we go into the next level — we have this amazing slate, including Mike’s Disney game and a couple of other things that are unannounced. Then we get into more of the elite status, and as long as we don’t let ego and arrogance creep in — and I’ll make sure we don’t — I feel we can be that enduring company, that great company.

Maybe one day people will be talking about Supercell and Glu. Different types of companies, but both held in high esteem for what they’ve done. That’s my goal. My goal is to create something great here. It’s not to make money. This is about creating something enduring that is a facility to pay back, to all the people here, the good fortune I’ve had working at the companies I’ve worked for, Kabam and EA in particular. I’d love for everyone here in the future to say, “My time at Glu, whether it was a year or 12 years, was the best thing I ever did. That company gave me and my family and so much. My career accelerated. I learned and made friends and had some financial benefit.”

That motivates me beyond anything. I feel like the only way to do that is to make something enduring. Not just a flash in the pan financial success, like MZ coming up out of nowhere and then going away. I want something steady, enduring, and long term.

GamesBeat: How do you view some of the talent that you want to either groom or bring in or foster here? I know the Crowdstar people — some of those leaders turned over, right? After they were sold.

Earl: Two of them, yeah. There are about 10 at the top. The former CEO we didn’t invite to join, because it wouldn’t have been a culture fit. The marketing head, we ultimately decided that it would be better if she — we mutually decided it would be a better fit if she went and did something else. The others stayed and are absolutely delivering unbelievable, spectacular results.

Not everyone is going to fit in a post-merger integration. We all know that. I think we got the best talent out of that contingency that grew. And in terms of grooming other talent here, that’s really what we’re all about. Whether it’s investing in people who are currently here or trying to find more.

Getting Mike Olsen — you obviously knew Mike from EA. He was the creative director on Tiger Woods. Do you remember back in 2001-2002, when Tiger was sort of a boring golf simulation with the swing meter? It was maybe a $20 million business. No one knew about it. What Mike did as the creative director on that — he worked for Dave DeMartini, who was then the executive producer — was he built in the gamification, including the analog swing and all the cool features. It went from a $20 million annual business to $130 million. That was all under Mike.

Then Mike went and did The Godfather. He was the creative director there. He did a couple of mobile games. He did Star Wars Galaxy of Heroes. He’s been like a brother to me. Galaxy of Heroes was a great achievement. But he was not in a system that was rewarding him for that. Getting him to come here gave him an opportunity to not only express himself, but also reap the rewards of his effort. At the same time, it injects this incredible new culture in the company.

Inasmuch as we can find another Mike Olsen or two, we will absolutely do that. If they’re not out there, we have plenty of talent with which to work, both on the publishing, revenue side of the business as well as the studio side of the business. That’s part of the path we’re on. The only question is the speed and the cadence of it, not the fact that we’re on the right path. It’s just how fast it happens. We had a very accelerated year last year. We sped up our move to profitability from what was going to be the third quarter of this year to the fourth quarter of last year. We sped up the cultural transition in a way that — now we can breathe that sigh of relief that it’s done. 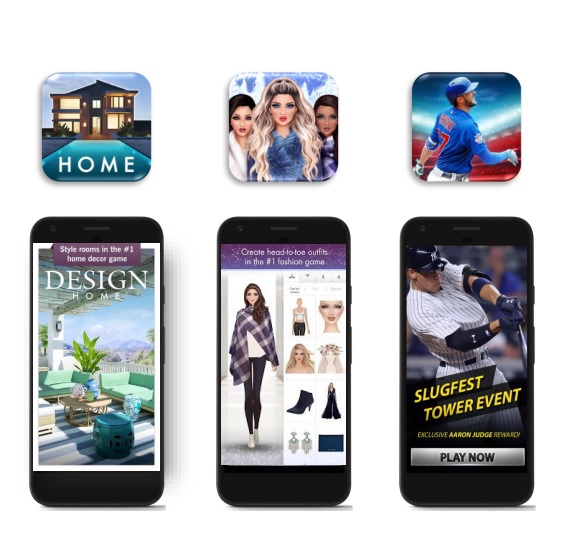 Above: Glu is focused on going big with fewer games.

Earl: Brian’s a great lateral thinker. His model sounds a little like Trip’s, with 3DO, of which Brian was a big supporter when he was running Interplay. That’s Brian’s mentality. He approaches it with more modern technology. What else is going on in the mobile space that seems interesting to you?

GamesBeat: Well, MZ has dropped off, like you said. It seems that Game of War and Mobile Strike hit their peaks and were being propped up by spending, and then they shifted all that to Final Fantasy, which didn’t have the legs.

Earl: True. Those games were really milking you. People just burned out. Slow and steady wins out. If you look at Clash of Clans, that’s slow and steady. Game of War was burning at both ends.

Akhavan: Games like that, if you lose some key clans, the losses are so quick. They all tend to migrate off together.

Earl: And then they moved their users to a lower margin business that hasn’t been able to….

GamesBeat: Yeah. I don’t know what they’re going to do. They must still have a lot of money.

Earl: But it’s not an enduring company. I’d rather have a company that does reasonably well for a long time, that you can build up and use as a vehicle and a platform to do all the things we were talking about, as opposed to just making a ton of money and getting out. That’s just not our mentality. That’s why I like Supercell. They’re aiming for the long term.

GamesBeat: And they admire Blizzard in turn.

Earl: Who personifies it better than Blizzard? Decade-long games? No one. They’re the kings. What advice would you have for us? You have the advantage of being able to see all these companies from the inside. We’re trying to get past a brand name that’s not meaningful, trying build a new culture and attract great talent. We’re a public company, so we have to report numbers every quarter, and we get beaten up for that sometimes. What would you say? 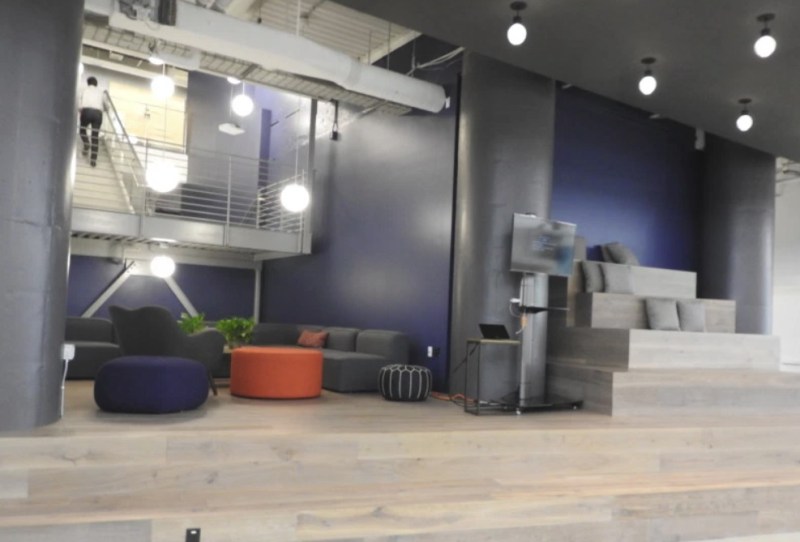 Above: Glu’s headquarters has a lot of open spaces.

GamesBeat: Looking at the hand you’ve been dealt, experimenting with that sounds like a good idea, as opposed to trying to totally rebuild things or copy someone else. San Francisco, like I said, is an outstanding base in ways that Helsinki isn’t. You can take advantage of that in some ways. There are very good people here. Getting them to work with you and do what you’re good at — this idea of shrinking down to fewer and better sounds like you’ve basically modernized the company for a situation where success is possible. The unique characteristics of mobile suggest that you have to go in that direction to set yourself apart and compete.

Earl: We’re very excited about what happened last year and what the future looks like. At the same time, we’re paranoid, every day, that we don’t rest. It’s such a great opportunity. Very rarely in your career do you get an opportunity like this.

GamesBeat: Doing too many things seems like it can be trouble. It seems like one thing Kabam didn’t need to do was try so hard in China.

Earl: Especially after it was clear that it wasn’t working. I’d say the bigger one was, they had a great business with Contest of Champions, and then they tried to do that with another property that didn’t work. It’s the same as having Kim and trying to do it with Katy Perry. Sometimes it’s just better to go deep. The magic of our business is that you’ve got an ability to entertain using the platform for many years. We’ve seen that with games at the top of the charts. As long as you don’t give up on it. Don’t get greedy and try to do too many of the same things. Just go deep on it. It’s a great business to be in.