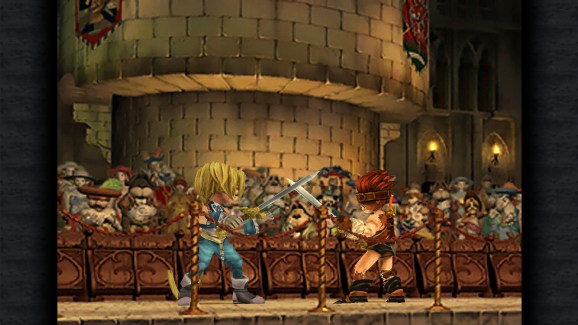 Oh, how my heart swells at the sight of Final Fantasy IX.

Chrono Trigger is out on Steam! Yay! But it’s a port of the mobile version. Boooo.

Unlike some of Square Enix’s more questionable mobile ports (like Final Fantasy VI), Chrono Trigger at least didn’t get any ugly graphical overhauls (just some questionable filters) for PC. But the mobile version features giant buttons, menus, and a plain font all designed for a small touchscreen. Those features look bland and terrible on PC.

So, alas, Chrono Trigger on Steam isn’t the ideal way to play this beloved classic. But don’t fret, PC-playing JRPG aficionados. Steam has plenty of other great, classic JRPGs that have received better ports. So if this new version of Chrono Trigger is bumming you out, check out these games instead.

Ah, Final Fantasy IX. My favorite entry in the series and one of my favorite games ever made. A classic for the original PlayStation, this PC version released in 2016. It’s faithful to the original, but it sharpens the graphics a bit and gives you optional features if you’re looking for an easier experience. You can even turn off random encounters if you want to.

Final Fantasy IX has some of the most memorable characters in the series, including the mysterious and shy black mage Vivi, who has a heartfelt journey of self-discovery (as all sentient kind-a-robots with magical powers must). It also features another all-time great score from famed series composer Nobuo Uematsu. It’s a classic Final Fantasy experience, using the same turn-based battles the series depended on since Final Fantasy IV, but with a more polished and detailed world. And this PC version shows that not all of Square Enix’s PC ports are disappointing.

I first played Grandia II on the Dreamcast. At the time, it was one of the most beautiful JRPGs I’ve ever played. I adored the way some of its flashier attacks integrated anime-style, hand-drawn animation.

Grandia II might not stand out for doing any single thing better than its peers, but it has all of the trappings you want from a JRPG: a fun battle system, memorable characters, and a great soundtrack. Speaking of the music, the guitar-heavy battle theme remains one of my favorite pieces of video gaming music.

The Tales series has a lot of entries on PC; I recommend Tales of Symphonia. The franchise stands out because it’s unique fighting, which focuses real-time combat with cool-down abilities. It’s a more active alternative to typical turn-based stuff, but it’s not just a mindless hack-and-slash action-RPG either.

I also love Symphonia’s art-style, with its cel-shaded, cutesy characters. The adventure itself is long and memorable, with some decent twists keeping things fresh even when you think you’re nearing the end. Subsequent Tales games have been good and featured similar gameplay, but their stories and characters don’t stand out as being as memorable.

The Legend of Heroes: Trails in the Sky

I finally played this classic last year, and it’s now easily one of my favorite RPGs. Trails in the Sky starts out as a simple JRPG with familiar tropes, systems, and aesthetics, but it keeps evolving into something more complex and memorable. It’s a deep game that has a well-defined world, and you can spend a lot of happy time just talking to the different townsfolk and learning about the land’s politics and cultures.

The sequel, Second Chapter, is a direct continuation. If you enjoy Trails in the Sky, make sure you play SC, too.

If you’re looking for something with more of an action RPG slant, check out the Ys series. Ys I & II Chronicles includes enhanced remakes of the first two games in the series, which play like a more RPG-focused and faster-paced version of the classic, top-down The Legend of Zelda games.

It’s a nice way to get two good games in one package, and the 2D artwork is beautiful and vibrant.