Last May I pointed to WebVR games as one of the VR industry’s biggest potential sweet spots for generating widespread traction because the combination of VR, games, and the open web represents a giant industry intersection. The web is unparalleled in its capacity to get VR games in front of end users, and get them playing, since it bypasses so much of the friction that otherwise serves as one of the chief headaches for the industry: distribution.

There’s also WebVR’s forthcoming seismic upgrade to the WebXR API, which will soon allow developers to create mixed reality content that is responsive across the full spectrum of immersive computing devices. That is, VR and AR under one umbrella. The implications this opens up are profound insofar as it expands the potential reach for any single piece of content that developers ship, and in the context of games it means that any player with virtually any gadget or gear will now be able to play, wherever they are and on their own terms.

“WebXR’s real strength is about distribution. Not many people I have polled over the years like downloading and installing anything, not even the game developers.” Damon Hernandez, WebXR Product Manager for the Samsung Internet team, told me. “WebXR allows anyone with an Internet connection and the right browser interested in your game to be able to experience it with one click on a link. Sure I am not in the games industry but removing major barriers to entry is key in any field and very transformative.”

The WebXR API opens up an exceedingly more practical path for creating cross-reality games because a developer just needs to learn and work with a single API in order to offer the same entry point for a multitude of different realities to converge, and all of this according to the customized requirements of the user. You can play a board game, for instance, with your handheld device during your lunch break at work against an opponent who is playing in VR in their living room, and another who has the board and pieces manifest on a table outside at the park. 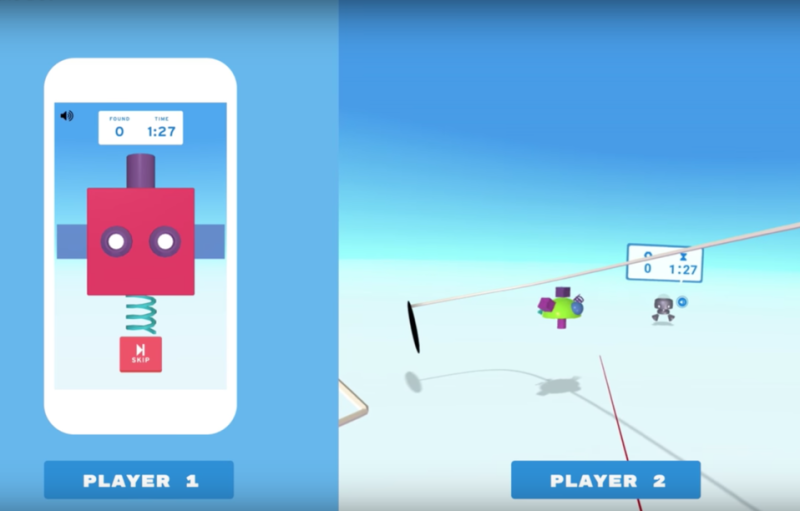 Above: Spot-the-Bot by Hook Studios

One example of an early stage cross-reality game is Spot-the-Bot by U.S.-based Hook Studios, which was among the first WebVR experiments to be showcased by Google last year. It’s a social two-player game that allows you to team up with friends in a collaborative race against time. While “player one” is immersed in a virtual world filled with robots and parts, “player two” watches by using a mobile or desktop screen, serving as a spotter to helping player one to, you guessed it, “spot the bot” in VR. The WebXR API potentially opens the door to the third-mode of game play, which would allow these bots to go out for some fresh air as digital sprites in the real world.

“WebXR will open the doors to a new breed of games, because of the combination of cross-modality responsive nature of WebXR, and the lightweight responsive nature of the web.” Blair MacIntyre, Principal Research Scientist on Mozilla Mixed Reality Team, told me. “Building games for WebXR means it is relatively straightforward to respond to the user’s choice of device and modality (handheld, desktop, tablet and headworn AR and VR displays), but also respond to new displays and devices as they come out. As long as the new devices have a browser that supports WebXR, a version of the game should work on the new platforms.”

Some believe, as I do, that so-called “killer apps” that will inevitably take immersive computing to the mainstream will be social and collaborative. What other platform is more inherently the staging ground for these qualities and features than the open web? Indeed, it’s the innate structure of the web that offers the social grease that makes it so appealing and approachable, which are the ideal conditions for discovery, distribution, and monetization for the lightweight cross-reality WebXR games that the industry should be prioritizing.

It’s the small, social, and shareable games that are fun and have a high likeliness of going for a viral spin around the web just by by sharing a URL that we should be encouraging and incentivizing the developer community to explore. These kind of WebXR games benefit hugely from being able to be shared on Facebook, Twitter, and over instant messaging; allowing friends to jump into the experience without having to install anything. The additional layer of WebAR simply extends and enhances the accessibility, usability, and sheer convenience for the benefit of the user.

“The biggest challenge is to adopt a mindset that is not trying to create the next blockbuster hit. They need to break the game idea down into smaller chunks, with less complexity and realistic content, so that this smaller experiences can be delivered directly via the web.” MacIntyre told me.

Mozilla has also just recently made it even easier for those more heavily vested in the fully-featured game engines to benefit from the immersive web with their recent release of a neat WebVR exporter for Unity that takes advantage of Unity’s WebGL exporter. So native developers can now readily publish straight from Unity to the open web so that their users can get access and play without having to deal with app stores or long update cycles.

Above: A demo of Mozilla’s WebVR exporter for Unity

The WebXR API should be made available to developers for early testing in Q1 2018 and, with it, you can expect to see more of the old borders and boundaries blur, which is why they call it mixed reality. Conceptual barriers will continue to fall so that developers and players alike, along with the pundits who keep misframing VR and AR as two separate and distinct streams, can start to look through the lens of a new paradigm in which games and mixed reality content in general can be increasingly customized according to the localized requirements of the user, regardless where they are or what they have in their hands or on their heads to play or work with.