0°N 0°W is a psychedelic voyage between worlds, simulating what it’d be like if you had a TARDIS (Doctor Who’s time-traveling ship that looks like a phone booth) and a couple tabs of potent LSD. Indie developer Colorfiction has been working on this interdimensional roadtrip for four years, and it’s out now on PC.

It starts with a short film documenting a cross-country trip that ends — or perhaps begins anew — at an abandoned gas station. You stop to refill the car and find yourself in a world that doesn’t seem quite like your own. The only building you can go into is a movie theater that flashes the name “0°N 0°W” above it like a dare.

From then on, it’s all about exploration. You hop between dimensions by entering doors, or falling off the edge of the world, or going into the menu and selecting nonsensical coordinates from a mysterious computer screen. 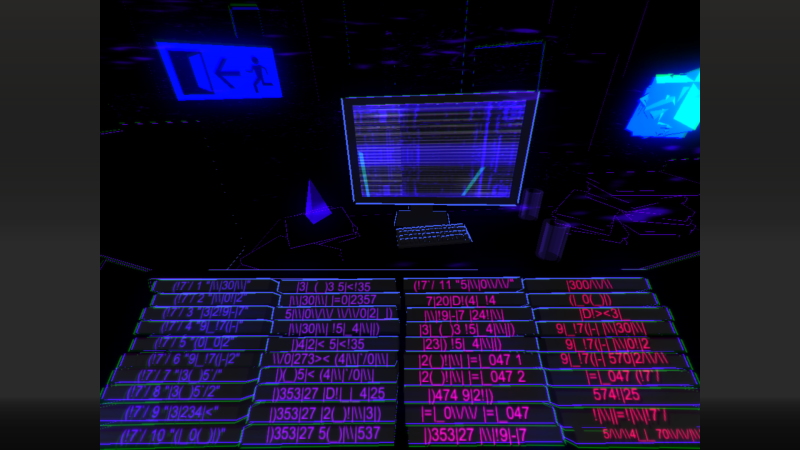 Above: You can access the computer from the menu at any time and select a coordinate.

Some of the places you visit are cacophonies of visual noise, static, and searing hues. Others are stunningly alien, with shards of light piercing the ground like thorns and the sky swirling around you. One dimension I saw pulsed with blooming colors, looking more like I was reading the heat signature of it rather than actually seeing what it looked like.

Occasionally, I got the sense that this was a place where a civilization once thrived — like a desert with skyscrapers half-crumbled into the sand. When I entered one of the coordinates, I found myself drifting in the wreckage of a planet that had already been destroyed. Motifs kept popping up, repeated evidence of human existence such as a stairway winding up into the ether above my head. And I kept seeing the same living room rendered in different colors, as though I was viewing many different versions of the same world. 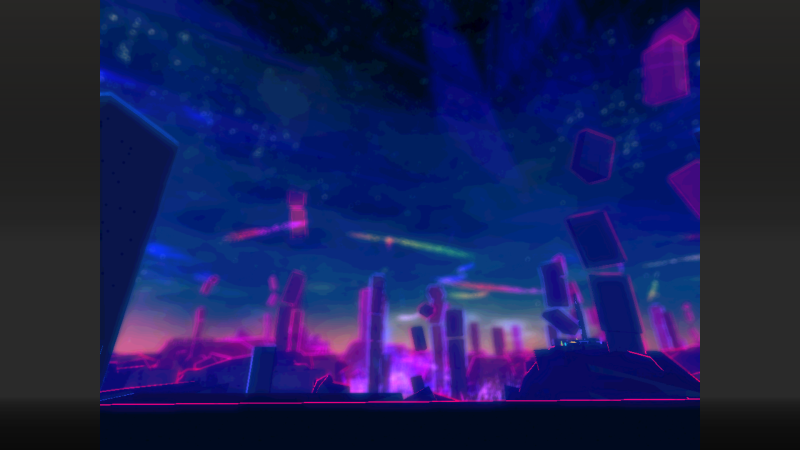 0°N 0°W is enigmatic, made more so by the fact that you’re not presented with a mystery to solve. In this case, the journey really is more than the destination. You can’t really interact with anything; you can only move and observe and occasionally jump with a kind of gleeful low-gravity ease. The worlds aren’t procedurally generated, but the game presents them to you in a randomized order each time you play and this makes different patterns begin to click for you as you create your own narrative for why these places exist and why you’re visiting them. Did you arrive here by accident, or was this the point of your road trip all along?

Not all of the worlds in 0°N 0°W are compelling. Some look as though they’ve been run through a Photoshop filter, and others are just noise. But a number of them are visually arresting, and you can always change the channel, so to speak, if you don’t want to explore that particular landscape.

I’m not sure if I could play it for much longer than an hour at a time — but taken in small doses, it’s a nice vacation from reality, and a pleasant stroll through spacetime.