Ubisoft announced that Tom Clancy’s The Division has reached more than 20 million players on the second anniversary of the online shooter’s release. At about $60 per game, the retail sales of The Division probably add up to about $1.2 billion, not counting revenues from expansions or other live events. That’s an amazing outcome for a game that went through a huge hype cycle, encountered bugs and other disappointments at launch, and then went through overhauls that got it and audience back on track.

Ubisoft introduced The Division in March 2016. It had a compelling story, set in New York City during the break out of a global pandemic known as “The Dollar Bill Flu.” Since that time, Ubisoft said 500,000 players spent more than 400 hours in The Division, and they brought 549,939,300 rogue agents (those who shoot other players) to justice. About 66 billion nonplayer characters died. The Underground area got 160 million visits, and players cleared it 69 million times. On average, 161,000 agents die every hour in the player-versus-player Dark Zone.

Ubisoft also launched expansions including the Underground, Survival and Last Stand, and that helped build the overall audience. To keep it going, Ubisoft has a month of in-game activities planned, including four global events from March 1 until March 29, with one global event per week. Global events are a live feature in Tom Clancy’s the Division that alter the game experience by adding modifiers to all in-game activities while granting participating players a chance for special cosmetic and gameplay rewards. 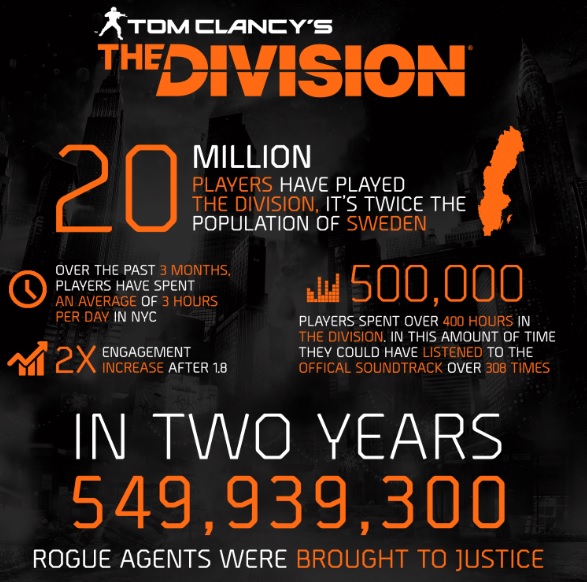 Above: The Division has hit 20 million players.

Players can tune in to the official Division Twitch channel for their Daily gameplay streams and Weekly State of the Game at 8 a.m. Pacific time for Twitch Drops, or in-game rewards for livestream viewers that will run continuously throughout the month of March. Viewers who spend more than 30 minutes (continuous viewership not required) watching the livestream will automatically unlock prizes, as long as players have linked their Ubisoft/Twitch accounts.

Since its launch, the teams released three expansions and nine significant updates that included new gameplay modes, Dark Zone map expansions, new incursions, gameplay rebalancing and quality of life improvements along with a wealth of customization options and live activities. 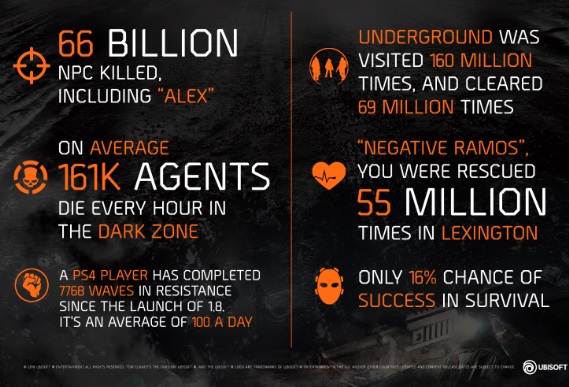 “We are very proud of what we have achieved during these past 2 years. Listening and giving back to the community has always been our first objective and we would like to thank all The Division players for their valuable feedback and their support,” said Julian Gerighty, creative director, in a statement.