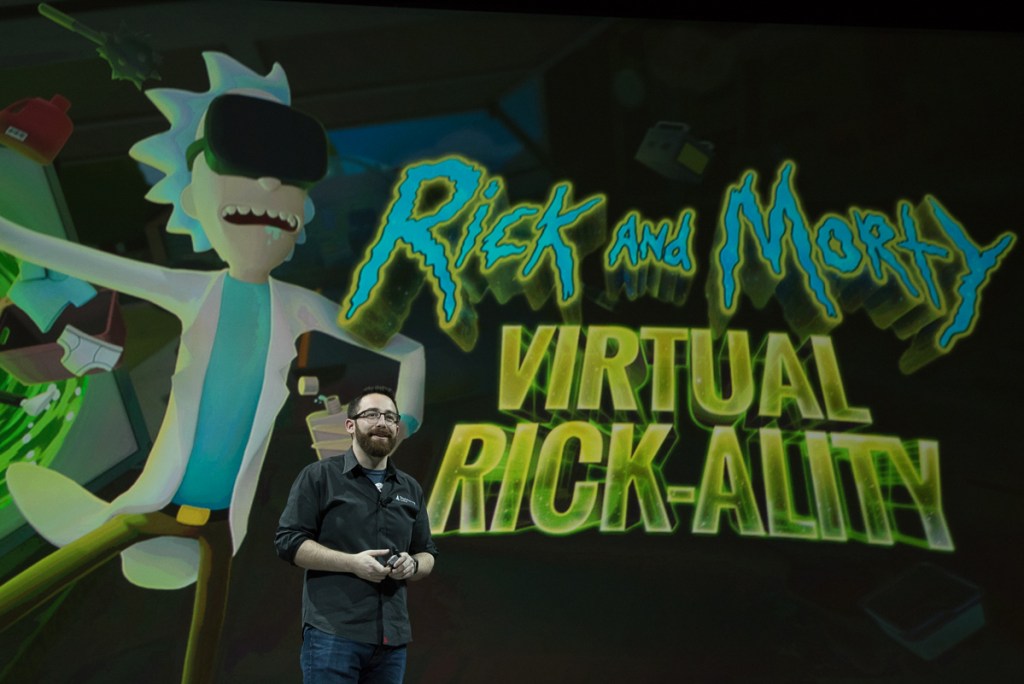 GamesBeat: Would you prefer to have something in your hands still or something that detects your finger movements?

Schwartz: We’ve been thinking about that for quite a while. I could talk about this for hours, the intricacy of it. The shortest answer is that the loss of haptic press that you would experience if you didn’t have a controller with a trigger in your hand is such a major loss that, if your goal in your content is to have singular interactions — I’m going to pick up this item, I’m going to throw this item, I’m going to pull this lever, anything with direct manipulation — you really want something to make up for all the lost haptics.

If it’s just something like a little clicker in your hand, that’s still so important. If it’s just raw Leap Motion-esque visual tracking of your hand, when is the point that you’ve grabbed the item? When you think about it, the reason I’m able to pick up this phone and know that I’m picking up without looking is because my fingers touch it. None of that’s going to happen in the empty air in VR. It’ll feel muddy. It’ll be very hard to know whether you did or didn’t do an action.

The controller is here to stay for a little longer than people think. It looks good to have raw hand input. It looks like a very tech-ey Minority Report future thing. If you’re doing gestures or scrolling through content or something that’s less game-specific — it depends on the context. But for games where you want to guarantee that every time I do this thing I get 100 percent success rate, raw hand input will take a long time to get reliable. It’ll be very hard.

GamesBeat: It’s possible to see the platforms start diverging because of these different options. Things that could detect whether you have legs, hands, fingers.

Schwartz: It’s maybe that the platforms are diverging, or maybe that input is contextual to the content you’re dealing with. Maybe it’s one headset, but you have either controllers or raw tracking or something else, if you’re doing a B-to-B type of application.

GamesBeat: I went through the Star Wars experience that The Void created at Disneyland. It seems like high-end VR could add some things that you wouldn’t get in your home system. They put this piece of wood in your hands as the blaster, and it feels substantial, but the trigger still ends up feeling like a toy.

Schwartz: That’s where, if you go one level deeper, if you add trigger-based haptics that push back on you—it wouldn’t matter if it looks silly in the real world, if it feels right. Some stuff is happening in the home. On the HTC side you have the Vive tracking pucks that you can detach to arbitrary 3D-printed models, gun controllers and things like that. Something in the right shape does help a lot.

GamesBeat: How do you look at the future, then, when it’s going to be ready?

Schwartz: What it comes down to for me for content companies, are you building content of a size and scale that makes sense at the current point in the trajectory of VR? I would say that a six-person team, a 10-person team, right now has a pretty good chance of making back their investment, especially if they’re playing it a little on the financially conservative side.

Would I put a 50-person team full time on an 18-month project right now? The amount of money that would take, with the amount of headsets—even if you were number one in attach rate on all three platforms, I’m not sure you would have the ability to make that back. It’s about matching to that curve. I feel optimistic and positive about the future of VR. The big challenge is just how to scale, how fast, and where. It’s not, “Is VR a good bet?” It’s a good bet. You just need to know when to scale. 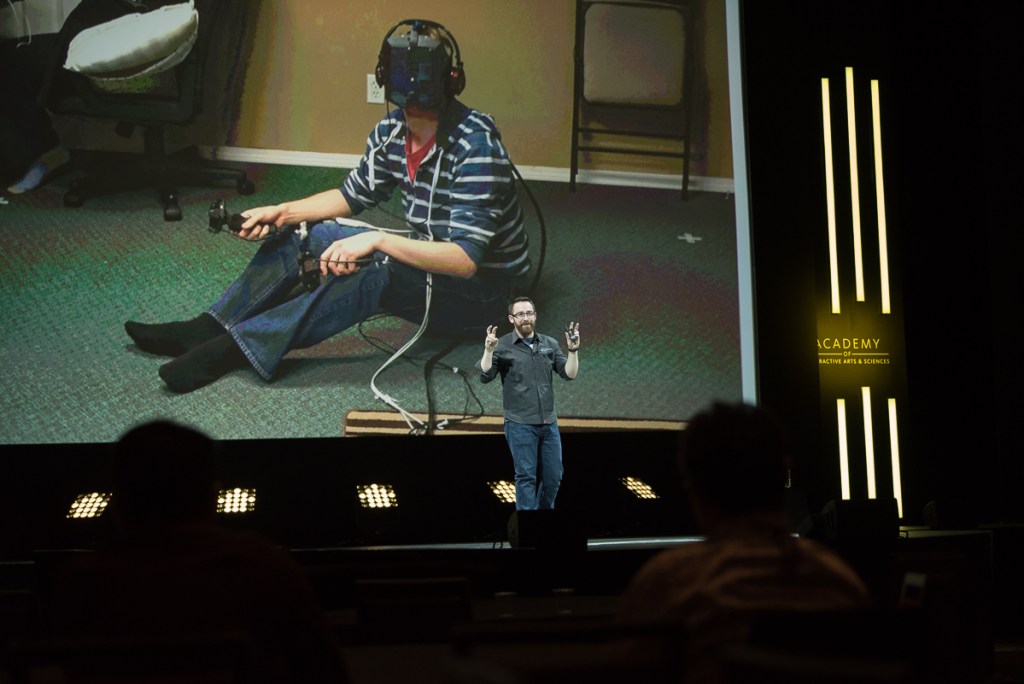 Above: Alex Schwartz gives at talk on VR at the DICE Summit in Las Vegas.

GamesBeat: The first few tries will be good to learn, and maybe later on you find the pot of gold.

Right now, anecdotally, the amount of public perception — like, if you’re completely out of the tech space, have you heard of VR? A lot of people now have heard about it. They’re curious. We have a lot of people waiting, or on the edge. Maybe the next holiday season they’ll dip their toe in. Price plays into it, but also ease of onboarding, like I say. I can’t make my friends build their own PCs in order to experience good VR. We need to make it easier to obtain, easier to get on, and a little cheaper. That’ll happen. We’re slowly going from an enthusiast market to mainstream. We’re on that curve.

GamesBeat: Do you feel the need to convince other people that VR is still on that path? Do you have to talk developers into expressing themselves in VR?

Schwartz: I don’t try to tell people, “You should stop doing traditional games and do VR games.” I try to show people good VR. A lot of times it’s so magical, that moment where a lot of people say, “I didn’t know VR was this good. There are so many possibilities.” But I would never tell someone they’re doing it wrong by not being in VR. “Get out of mobile! Go to VR!” That’s not what I would tell anyone. It has to be your own passion, your own decision to go in.

I wouldn’t warn people away from it, though, that’s for sure. Our thing is we just try to go out and share as much as we can about what we’ve learned, and specifically about what went wrong. A lot of companies are afraid to say that they made a mistake. We try to go out there and normalize that and share some lessons. Then maybe a young developer who goes into VR tomorrow will have more background about what works and what doesn’t, because of us.

GamesBeat: What would you throw out as a big mistake you learned from?

Schwartz: The GDC talk we gave last year, the postmortem of Job Simulator, goes through 20 or 30 big mistakes we made. I mean, none of them were huge. But we had interactions that didn’t work. We had scenarios that didn’t fit with the type of fun we were going for. We learned how to interact with floor-level items better, because it was getting very confusing or out of tracking. We solved the technical bits, and hopefully those help developers little by little.

There’s no big over-arching singular thing we did wrong. It’s just a series of A/B choices you make. You go left or right when you try out a prototype. We try to share the one that didn’t work, so you know next time.