Taking a page from choose-your-own-adventure books, interactive story games are enabling players to decide what happens to their characters. The top seven titles on the Apple App Store and Google Play generated over $14 million from in-app purchases last month, according to Apptopia, a third-party provider of app data.

Interactive story games come in a couple of different flavors. In titles like Ludia Games’s What’s Your Story?, players can create an avatar and interact with popular IP like Divergent and Project Runway. Pocket Gems’s Episode also features titles like Pretty Little Liars and Mean Girls, but it also acts as a platform that enables people to make and publish their own original stories.

Chat fiction is another take on interactive stories, integrating choices into a messaging-like interface. Players can read and write chat-based stories on apps like Telepathic, Inc.’s Hooked. It’s often the top app in the Books category, followed closely by Science Mobile’s Yarn and Wattpad’s Tap. Games like The Pixel Hunt’s Bury Me, My Love and Cheritz’s Mystic Messenger also integrate aspects of chat fiction, but focusing more on choices and developing deeper relationships with characters. 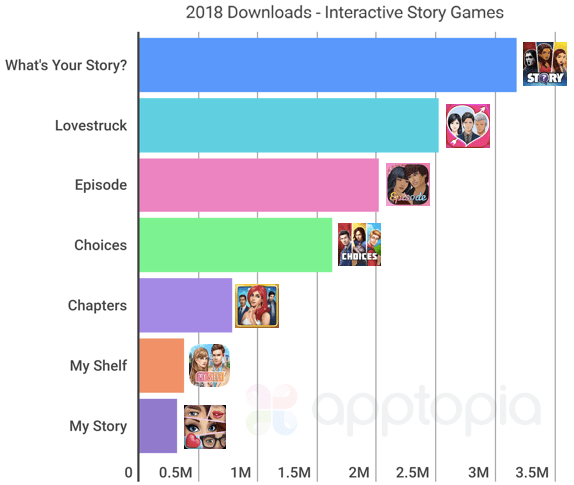 According to Apptopia’s data, What’s Your Story?, Episode, and Pixelberry Studios’s Choices: Stories You Play are the top titles in the space. What’s Your Story? is the most-downloaded interactive story game this year with over 3.5 million downloads across the Apple App Store and Google Play. However, older titles like Episode and Choices have established a loyal fanbase. Episode launched in 2013, and partnerships with IP like Pitch Perfect have led to 6 million weekly active users. The studio reports that its 50,000 stories have collectively been viewed over 3 billion times.

These successes have piqued the interest of bigger publishers. In November, Nexon acquired developer Pixelberry, and Pocket Gems received a $90 million investment from Tencent. Last week, Ubisoft snapped up 1492 Studio, which develops interactive romance stories like Is It Love?

Apptopia communications lead Adam Blacker says that interactive games’ popularity will continue to grow. However, because its audience tends to skew toward younger players, it may not reach as many people as games that have mass appeal across ages.

“Five years ago, not enough teenagers would have smartphones to make these apps as profitable as they have been,” said Blacker in an email to GamesBeat. “These apps haven’t hit their peak yet as younger audiences will continue to grow but there is a cap when you compare it so an IP like Candy Crush which is successful across all age groups.”