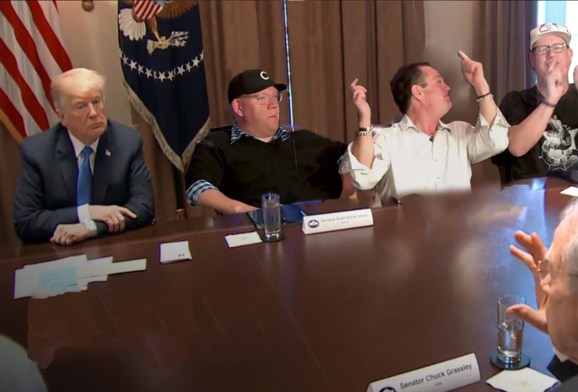 Artist's representation of what the Lang Zone would look like in the White House.

President Donald Trump is meeting with the gaming industry on Thursday as part of the White House’s ongoing efforts to find a reason for gun violence, and hey … “games” starts with the letter “g” so I guess they’re getting closer.

The Entertainment Software Association, the primary lobbying group for game publishers, confirmed today that the meeting is happening. This comes after White House press secretary Sarah Sanders announced Trump’s plan to speak with the industry this past Thursday. At that time, however, the ESA told GamesBeat that no one at the White House had sent an invitation to the event to anyone in the gaming indusry. But now Trump has formally set a date and time, and he even remembered to tell everyone — and the ESA and its member companies have RSVPed.

Here’s the ESA’s statement regarding the meeting:

“Video games are enjoyed around the world and numerous authorities and reputable scientific studies have found no connection between games and real-life violence. Like all Americans, we are deeply concerned about the level of gun violence in the United States. Video games are plainly not the issue: entertainment is distributed and consumed globally, but the US has an exponentially higher level of gun violence than any other nation. The upcoming meeting at the White House, which ESA will attend, will provide the opportunity to have a fact-based conversation about video game ratings, our industry’s commitment to parents, and the tools we provide to make informed entertainment choices.”

President Trump has already brought up video games and other mediums that happen to have violent imagery as potential scapegoats for mass-shooting events in the United States. During a meeting with gun experts and legislators last week, he implied that someone should do something to stop his own son from consuming violent content.

“The video games, the movies, the internet stuff is so violent,” Trump said. “It’s so incredible. I see it. I get to see things that you would be — you’d be amazed at. I have a young — very young son who — I look at some of the things he’s watching, and I say, ‘How is that possible?’ And this is what kids are watching.”

For its part, the ESA recently revealed an effort to teach parents about tools that enable them to control how much time children can spend on a system and whether they can spend money. The organization does plan to bring info about the parentaltools.org site to the White House on Thursday, and maybe someone can teach Trump how to block his son from seeing the video games, the movies, and the internet stuff.

As for any new rules regulating the content or distribution of games, the ESA is ready for that fight. It already did the work through the Supreme Court of the United States to define games as protected speech as the defendant in the Brown vs. Entertainment Merchants Association & Entertainment Software Association case from 2005. Even with a right-leaning court sympathetic to Trump, it’s unlikely that it would overturn First Amendment protection for video games.

So I guess it all comes back to personal accountability and regulating that other “g” word … wish I could remember what it is.