The PC mobile card game’s Arena mode has players creating their own decks by picking cards from selections of threes. Playing Arena costs $2 or 150 in-game gold. You get rewards based on how well you do, and you keep playing until you either rack up three losses or 12 wins. The mode gives Blizzard a way to earn money off its free-to-play game outside of selling card packs.

Before, your three cards for each pick would all be from the same rarity, but a card’s rarity doesn’t have much to do with its quality. A Common card could often be much better than an Epic one. Once Hearthstone’s 10.4 patch goes live, the three cards can now be from different rarities. Instead, you’ll be choosing from three cards of about equal power levels.

Blizzard is hoping that this change will make creating Arena decks more interesting. In the past, players have relied on outside tier lists to help them draft. They would look at their options and just see which card had the best rating. But if each of the picks are around the same power level, players will instead have to focus on picking cards that are better for their deck’s archetypes or fill certain needs (maybe you need a low-cost minion more than a strong, expensive one).

Cards of the Legendary rarity will still be offered together, but they will also now be around the same power level. Otherwise, you’ll see Common, Rare, and Epic cards appear with each other. Blizzard is also going to offer cards of below-average value less often in general. 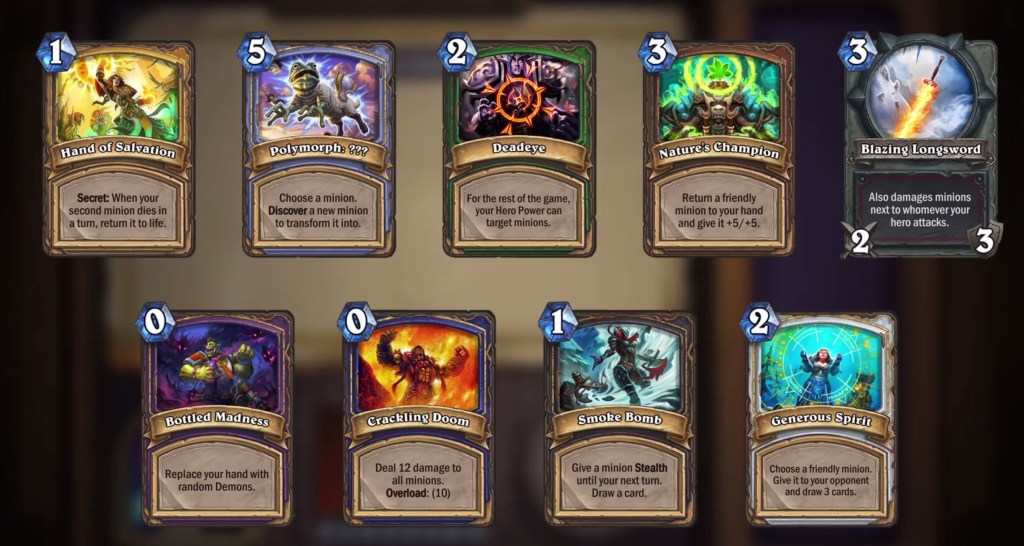 Blizzard is also adding a special Arena-only card for each class. These were selected by fans at the last BlizzCon, and you can see them above.