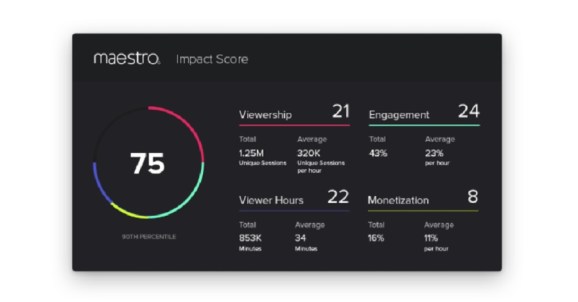 Maestro looks at how much engagement and monetization results from a livestream.

Maestro has unveiled the Impact Score, a brand and agency-focused rating system designed for to measure the engagement and monetization of interactive livestreams.

The startup believes that measuring the number of downloads or views for streams isn’t enough. It also wants to figure out how closely engaged viewers were with the stream and whether it made money for the brands and agencies that sponsored it.

“We are doing this because we need brands and agencies to be able to measure livestreams consistently, one against another,” said Maestro CEO Ari Evans, in an interview with GamesBeat. “The Impact Score is a metric for engagement, monetization, and viewer hours. The future of livestreaming is interactive, and we are helping customers create the gold standard for measuring interactivity.”

An Impact Score is a measure of a livestream’s performance within Los Angeles-based Maestro’s ecosystem. The final score out of a possible 100 is a sum of four sub-scores. Each sub-score contributes up to 25 points, based on this event’s metrics compared to those seen in the ecosystem in the twelve months prior to the event. Increasing any sub-score raises the final Impact Score.

Engagement and monetization are measured as the percentage of the audience who directly engage or transact, respectively, during the stream using one of Maestro’s related features.

“For brands, the secret is finding a highly engaged audience or one that is monetizable,” Evans said.

The broadcasters can collect their Impact Scores and see how they change over time. Then they can publish these scores, so that brands and agencies can sort through them to see if the livestreaming body — we’re talking mostly about companies here, rather than individual streamers — is a good fit for the brand.

The data powering Impact Scores is collected at a granular user-level, enabling both brands and broadcasters to identify viewers and build direct relationships. Customers can focus on growing an audience list instead of an anonymous view count and can further leverage Maestro’s client relationship management (CRM) system to retarget segments of their audience, tailor the experience, and maximize campaign objectives.

You can think of Impact Scores as similar to Nielsen ratings, which were used to evaluate the success of television shows, for the sake of advertisers who poured money into those shows. In that way, Evans believes Impact Scores are a significant milestone in crafting the future of livestreaming and the participation of brands in them. Customers can choose not to publish their Impact Scores as well.

“You can use it to segment viewers based on behaviors, like who viewed certain segments or bought something,” Evans said.

In addition to the Impact Score, Maestro provides a white-label platform for enterprise livestreamers to own, engage, and monetize their audiences. It helps customers create engaging experiences with a data feedback loop to identify viewers, tailor strategies, and maximize business metrics. The company developed its white-label livestreaming platform over the past three years.

“So far, the livestreaming industry has been looking at expanding its numbers, not monetization, but we think that will change over time,” Evans said. “Ultimately, I think the money is in things like subscriptions.”

Evans founded the company in 2015. The company has 20 employees, and it has raised $5.8 million to date.