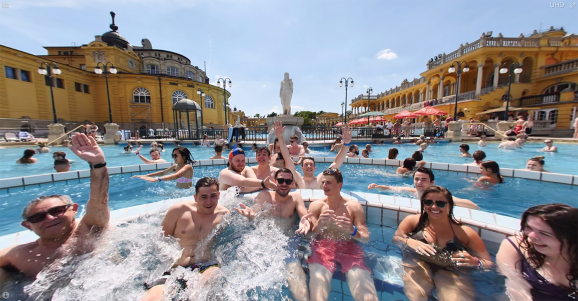 One of the chief reasons that it’s exceedingly difficult to forecast when exactly the VR industry’s hype cycle will finally draw to a close, is because it’s exceptionally difficult to get people to put on the darn headsets, let alone make it an established habit. It’s probably fair to say that this even holds true for many professionals in the VR industry itself.

Meanwhile, the space is segregated into the patiently half-committed fence-sitters, the resilient cockroaches, those that burn out of cash, and those that have been swallowed by the agency model. There are also the agile-minded sort that shift their focus entirely to AR-driven content and applications, which otherwise offers more favorable market forces to play while they wait for the VR gear to iterate into exceedingly more comfortable, attractive and affordable units for the consumer market.

On the other hand, 360 degree photos and videos, the medium that was accepted only recently with ambivalence by the “360 isn’t true VR!” ilk, is ironically cruising on its own set of wheels and has even delivered the first sticky monetization model as its gift to the VR industry as a whole. What’s clear from this episode, which has only been a few years in the making, is that we’re fairly myopic in understanding the market landscape, and it is this myopia that has allowed many of us to underestimate the value and role that “middle ground” tech like 360 degree photos and videos have played as a staple industry segment that we all now reap dividends from.

I describe it as middle ground because it’s the kind of technologies we miss or overlook in our rushed pursuit to realizing our vision of high fidelity immersion. We miss the middle ground between the two points, which robs us from otherwise exploring, discovering and developing adjacent and parallel technologies that, in this case, also have “immersive” DNA, and may happen to be highly practical as mediums for the immediate term, but still, they are neglected out of ignorance of one species or another.

One such example of a middle ground tech that we need to pay heed to is PanoMoments, the “living photos” that are carved out as slices of time that animate as a user pans in and around a 360 or VR scene at their discretion. Be it a 1/10,000th of a second hyper-slowmo or a 24 hour time lapse, the medium nestles its nuanced use cases right in between the spectrum of what 360 photos and videos can offer, delivering something altogether new. (I have no relationship to PanoMoments — I’m just particularly interested in advocating its use in WebVR content.)

The tech that makes PanoMoments possible is based on the concept of coupling the dimensions of space and time so that they create a neat mechanism of codependence to one another, and so mutually constrict each other. That constriction, however, is what opens up new creative possibilities in how users and brands can express themselves using immersive content. It’s the same core concept in action as you might have come across in the popular first person shooter game, SUPERHOT, where “time only moves when you move”.

“It’s this constraint, much like the border of a painter’s canvas, that brings out the creativity.” Dustin Kerstein, founder at PanoMoments, described it to me. “We see it as a new short-form storytelling medium. The simple association of time plus space guarantees that each and every frame captured will be seen by the viewer, giving the content creator full control of the experience. And with rotating cameras and animated captures, the ability to show motion parallax brings the experience to life whether in a headset or on the web.”

PanoMoments don’t necessarily compete with 360 degree videos and photos, either, but complement them by expanding the potential toolkit available for both consumers, brands, or even for internal enterprise use. For example, in the case of 360 degree photos and videos, a user is more or less a passive spectator, which is ideal for the setting of a live event or when being guided through a narrative in a cinematic experience. In contrast, PanoMoments places the user at the helm as they animate the living moment by their subtle or swift movements and, in so doing, are made to feel like they are participating in the creative process.

“If a photo is worth a 1000 words, then a video should be worth 1000 x total frames, and that’s a very very large number. But it’s just physically impossible to absorb all parts of each and every frame of video. So much of the minutiae goes unnoticed, but there’s often magic in those details and motion. PanoMoments are living photos, and they turn even the tiniest of life’s moments into magic.” Kerstein said.

One of the use cases that no doubt initially come to mind will be to look at PanoMoments as the “GIFs of VR”, which is definitely a fun and probably very viral avenue to explore, particularly for the consumer market. It’s applications, however, go far beyond the gimmicky, as a 360 degree canvas can be made into a living tapestry of converging moments that form, together, into an effective storytelling medium that can be used in a variety of ways that Kerstein and his team are themselves only beginning to scratch the surface.

Consider that you can split the spherical sections of a 360 degree panorama into multiple PanoMoment segments in order to create an entire website of interconnected living moments that, at the same time, is fully equipped with mechanisms that can be used to drive VR and menu interfaces. The very constriction that might seem like a major functional impediment from one vantage reveals and opens up totally new ways to approach functionality and feature sets that can, in turn, be employed to enable novel and original ways to conceive user navigation and how we usually think up and design user journeys.

“Imagine the front doors of the building opening as you pan towards them. Due to parallax captured with the rotating capture method, you’re able to film subjects at both very close and far distances, and viewers will have a very strong sense of presence and a unique appreciation of the architecture.” Kerstein told me.

Above: Coupling time and space

A match made in WebVR heaven

PanoMoments also have the natural affinity with WebVR, to which it has been intentionally made totally compatible. Imagine living photos being woven throughout WebVR fabric as short-form entertainment, interactive menu experiences, creative advertisements, or just fun captures with family and friends. It also couldn’t arrive at a better time since the WebVR industry is now in what I’m affirming will be a huge year for the immersive web. The two immersive cousins can team up and be made of practical use by WebVR creators, stirring their imaginations, and so will help to further catalyze content creation.

“We need an abundance of high quality content that acts as a bridge from the 2D web into VR. PanoMoments are that bridge. They’re also an entirely new creative medium to explore; one that has a low development / playback cost but a very high engagement factor.” Kerstein said.

You can check out a gallery of examples of how PanoMoments have been applied for various use cases and so get a taste for the kind of experiences that are now available as a new way to record, express, share, and inevitably structure immersive content.