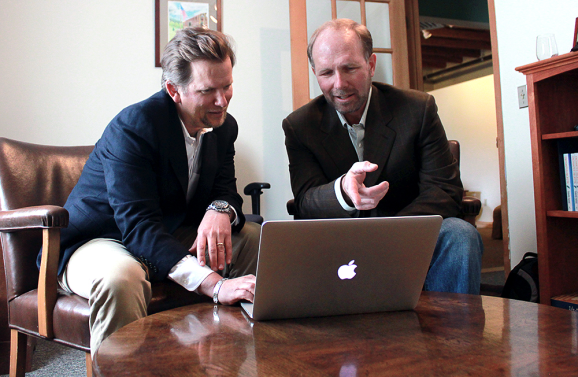 Next Frontier Capital's Will Price (left) and Richard Harjes (right).

Next Frontier Capital announced today that it has raised a $38 million fund to deploy more capital to Montana startups. The fund is the Bozeman, Montana-based firm’s second. Founder and general partner Will Price made the announcement today at VentureBeat’s Blueprint conference.

“We feel like with the launch of the second fund, we’re riding a larger wave of interest in Montana,” Price told VentureBeat in a phone interview last week.

Price, a Montana native, left the state for college and returned to start Next Frontier Capital. He said that Montana has experienced “considerable brain drain” for the past 100 years. Next Frontier Capital’s goal is to reverse that brain drain by giving startups in the state the capital they need to stay — and thus create jobs for the next generation of Montana residents.

Next Frontier Capital invested in 10 companies in its first $21 million fund, nine of which have a Montana presence. Next Frontier Capital claims that these companies have created 100 new jobs in Montana to date. Some companies just have team members in Montana, while others are headquartered in the state. Price said the firm “primarily invests in Montana industries with high intellectual property values, such as software, health care, and optics and photonics companies.”

Some of the most notable investments from Next Frontier Capital’s first fund include Submittable, a Missoula, Montana-based submission management platform, and SiteOneTherapeutics, which is developing alternative treatments for chronic pain management. Submittable raised a $5 million series A in June led by True Ventures, while SiteOneTherapeutics raised a $15 million series B last January, led by Amgen.

Price said that Next Frontier Capital has faced the same challenges as other regional venture funds: finding institutional limited partners (LPs) like pension funds and endowments that are willing to invest in regional venture capital funds.

“They don’t believe it’s going to generate returns. If you’re managing the Ohio teachers pension fund or something, your allocation of venture is probably 3 percent. Your allocation of regional venture capital probably doesn’t exist.”

Next Frontier Capital’s latest fund only has one institutional LP — the University of Montana — and the rest are high net-worth individuals. While Montana doesn’t have a long history of creating tech startups, it does have one advantage over other emerging ecosystems: It’s a popular place for investors, entrepreneurs, and other individuals who have made their money in tech to retire to or buy a vacation home in. Many of them have expressed interest in learning more about the Montana tech ecosystem, Price said.

The firm hopes to invest in 10 companies with its latest fund. Its first two investments from fund two are security startup Ataata and mapping platform onXMaps.