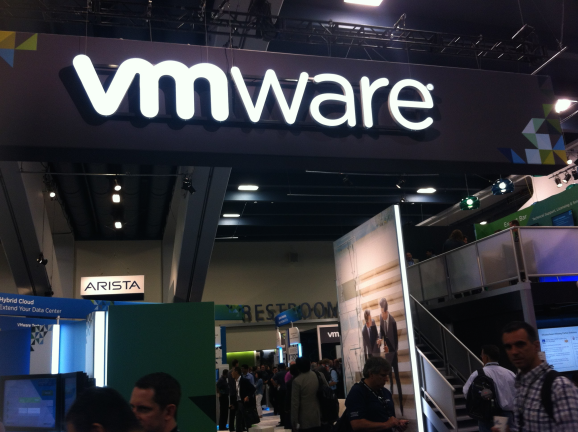 On the exhibition floor at VMware's VMworld conference in San Francisco on Aug. 25, 2014.

VMware Cloud on AWS is crossing the pond to London with a handful of updates announced today. First up, the software vendor announced that the bare metal cloud platform that lets customers run its software in the Amazon Web Services public cloud is now available in Europe.

This will be useful for VMware’s international customers, who may want to run their computing workloads closer to home or just outside the U.S. It also heralds further expansion of the company’s services into other regions at a time when keeping data in a particular jurisdiction is becoming increasingly important in key markets around the world.

This move comes less than six months after VMware announced the general availability of its cloud service at its VMworld conference in Las Vegas.

In addition to its geographic expansion, VMware also announced a partner program for its AWS cloud service. That means third-party companies like managed service providers can develop skills around deploying VMware Cloud on AWS, then use that to help businesses migrate and run their workloads. This is already available through the existing VMware Partner Network, which includes a ton of companies that help sell existing VMware software and services.

The expansion of VMware’s AWS offering is part of a broader set of announcements the company made today as it launched several new products, including the Log Intelligence Service, which works across private datacenters and VMware Cloud on AWS to help administrators with anomaly detection and analysis of potential issues.

VMware also updated its Cost Insight Service to provide customers with detailed information about how much they’d pay to move their application to VMware Cloud on AWS. Managing the price tag of a cloud migration is something that can be quite important for CIOs and finance leaders, so this program could instill added confidence in those thinking about taking the plunge.