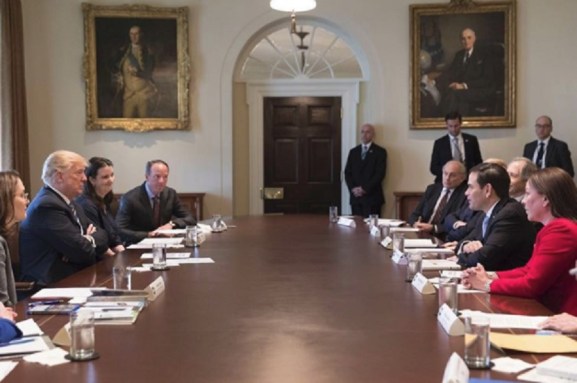 Donald Trump meets with the game industry and its foes. Mike Gallagher of the ESA is on the left, at the far end of the table.

The industry is bracing for a full-scale bantering from Trump about violent video games, as many expect the president to use games as a scapegoat for school shootings and other violence in society — rather than blaming guns. Last week, Trump asked whether games were to blame for shootings such as the horrible massacre at Marjory Stoneman Douglas High School in Parkland, Florida.

The Entertainment Software Association attended the Trump meeting, and it issued the following statement: “We welcomed the opportunity today to meet with the President and other elected officials at the White House. We discussed the numerous scientific studies establishing that there is no connection between video games and violence, First Amendment protection of video games, and how our industry’s rating system effectively helps parents make informed entertainment choices. We appreciate the President’s receptive and comprehensive approach to this discussion.”

The lobbying group declined to provide interviews on what was described as an hour-long meeting. Glixel reported that it kicked off with a reel of violent video game clips, which reportedly left the room in stunned silence. The clips showed human beings being killed in various ways in games, said Rep. Vicky Hartzler (R-Missouri), in a story for the Washington Post. Trump then went around the table asking for comments.

“Those from the video game industry were quick to defend [the video games] saying they were meant for a mature audience and that they weren’t intended for kids to see,” said Melissa Henson, a spokesperson for the Parents Television Council, said during a press call following the meeting.

On behalf of the ESA, the meeting included Mike Gallagher, head of the ESA; Strauss Zelnick, CEO of Take-Two Interactive Software, whose Rockstar Games label makes the Grand Theft Auto series that is a frequent target of game violence foes; and Robert Altman, CEO of ZeniMax Media, parent company of publisher Bethesda Softworks. (The president’s brother, Robert Trump, is on ZeniMax’s board).

Hartzler said in a statement, “Today’s meeting was an opportunity to learn and hear from different sides about concerns and possible solutions to violence in schools. I believe significant progress was made today, and my hope is that we can build on this progress in the future.”

The Independent Game Developers Association defended gaming on Twitter, noting how Trump and others are using the industry as a scapegoat for gun violence.

It’s not clear if the discussion went into much detail on research that shows no connection between games and violence, or if Trump showed awareness of the U.S. Supreme Court case on violent video games that was fully litigated in 2011 and led to a victory for the game industry.

Numerous game developers noted that those who actually make games were not invited.

Brenda Romero, a seasoned game developer, did not attend the meeting. But she wrote about it on Facebook.

I make and play games with my kids. We play D&D, too. I was then and am now a metalhead (m/). I married a guy who made Doom ffs. Our kids are honor roll students. This whole scapegoating of games is offensive to the art form to which I have devoted my life.

It is likewise offensive to the thousands of artists, designers, programmers, producers, animators, musicians, writers, biz and marketing people who work every day to create amazing entertainment. And it is offensive to the millions and millions of gamers.

The U.S. government has one of the oldest serious games programs in the world, believing in their power to change lives. To my knowledge, the ONLY game that was expressly designed as a recruiting tool for people who would then be “actually trained” to kill with “real guns” was America’s Army in 2002, funded by the US Government. In 2008, the U.S. Government was criticized for bringing this game into schools “educating today’s youth.”

Games — like any other form of media — have a range of content from “everyone” to “adults only” to “omg why”. I suggest the government review games and apply the same rating system that we apply for books. Our current reality is scarier than anything in games.

Updated at 4:40 p.m. with tweet from the Independent Game Developers Association.