In case you missed the memo, tomorrow (March 10) is Mario Day — a day to celebrate the world’s favorite animated plumber. And to mark the occasion, Google has partnered with Mario’s maker Nintendo to bring the character to Google Maps for an entire week.

But why is March 10 Mario Day, we hear you ask? It’s perfectly simple: someone way back in the dusty ruins of time realized that “Mar 10” looks a little bit like “Mario” on paper, and thus that kinda made it Mario’s unofficial birthday.

When you update the Google Maps app on Android and iOS from today, you’ll be able to switch the usual blue navigation arrow that marks your car’s position in navigation mode into Mario from his Super Mario Kart guise.

Above: Mario Kart on your map

To action this, you need to tap the little yellow question mark button — a familiar mystery box icon to anyone who’s played Mario-related games through the years — at the bottom of the Google Maps app.

Then you’ll see a funky “Mario Time” message, and you’re good to go. 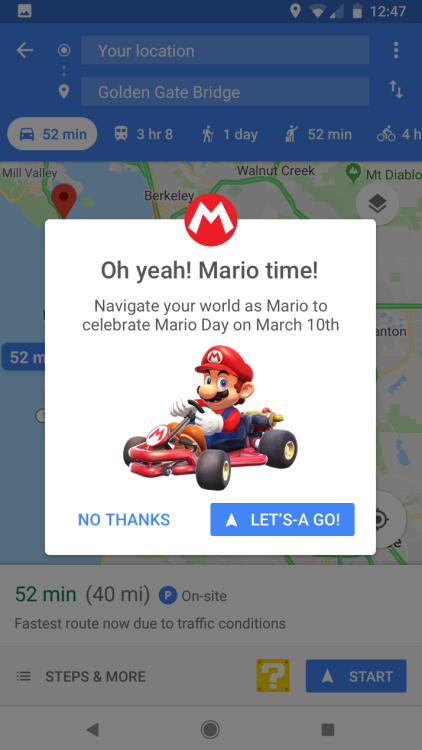 It’s a shame you can’t choose various characters from the Super Mario Kart game, but this is Mario Day after all — not Toad or Bowser Day.

This isn’t the first time Google has morphed video games into its Maps product — Pac-Man has made an appearance in the past. Star Wars fans were also given a treat back in 2015 to mark the launch of the new Force Awakens movie.

Sure, this initiative smacks of marketing — it just so happens Nintendo has a Super Mario movie and Mario Kart game in the works — but being able to traverse the streets of New York or London as Mario is kinda neat. Just remember to keep your eyes on the road for stray banana skins and rogue red shells.