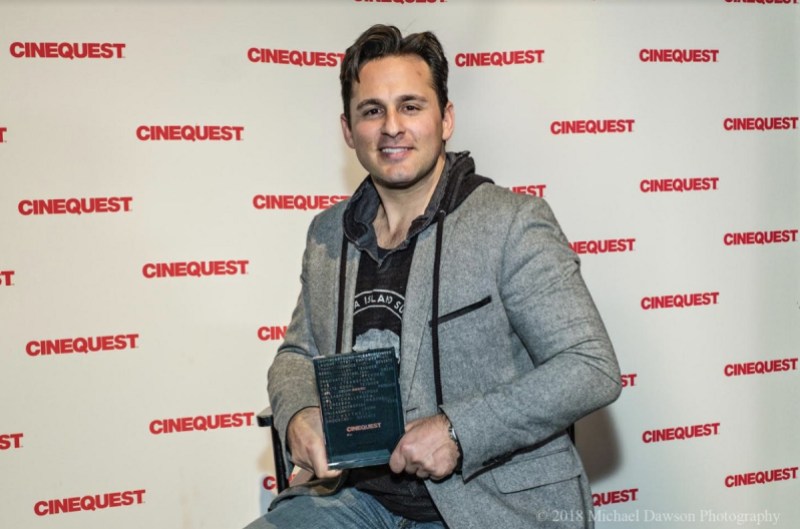 Above: Travis Cloyd won the VR Visionary award at Cinequest.

VentureBeat: Do you still have to keep anything in mind to make sure your audience doesn’t get sick?

Cloyd: The first movie we did, The Recall, was in first-person perspective. Like I said, we brought in a camera operator to play the part of one of the main characters. There was a lot of movement, and whenever you put on a headset and you’re now moving with the scene, with the rest of the cast, it sometimes creates that parallax and you get nauseated or dizzy. It can be too much for people.

VentureBeat: Do you think the point of view should generally be stationary, like in that interrogation scene? You can look around, but you’re in a fixed position.

Cloyd: It’s the luxury that we have as filmmakers and storytellers, to be able to pick and choose how we want those shots to look, if there’s any movement. Do we want the camera to be stationary? Do we want it to move? And then, how do we get the characters to move around the camera so that the audience feels like the full world taking place around them, but it’s not too much for us to absorb? It doesn’t create that parallax feeling.

VentureBeat: Where do you want the filmmaking process to go, your ability to make these kinds of experiences? What would make your life easier?

Cloyd: I think the future of cinema is multiple forms of media. We, as an audience, are getting smarter. A lot of the kids today, they don’t even go to movie theaters. They watch Netflix and Amazon and Hulu and iTunes and Google Play, all from their phones. Even if they have a 100-foot TV in front of them, they still sometimes choose to absorb their own content of their own free will. The audience has the right to choose the form of media they want to watch.

For me, how could my life be easier moving forward? It’s allowing a portion of your production to be focused on this immersive new medium. Not entirely on the standard 2D format that’s existed since the beginning of cinema. You shoot them at the same time, or you shoot them within the same production, with the same sets, while the actors are there. When you make a cinematic VR experience, you coexist with the movie.

When you create a movie, a lot of expenses go into that: actors, sets, production, everything that goes into creating a feature film. A VR content creator doesn’t have that luxury. When they make their movie, if it’s strictly a 360 or VR movie, they can’t afford to pay a big actor the amount of money they cost. They can’t afford to have these amazing sets. You can use those assets that you’re given when you coexist with a feature film. 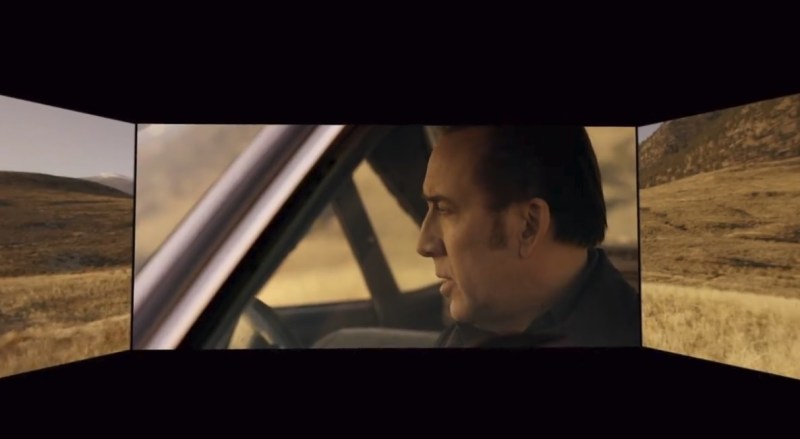 Above: It’s Nicholas Cage. In VR.

VentureBeat: What do you like about 360 video versus 360 animation? A game as opposed to a film in VR?

Cloyd: Currently, the market in VR is mostly experiential and gaming. That’s just where we’re at today. For people like me and a lot of my friends and family, who may be older than the average gamer, I think they want story. They want actors and characters they recognize. It’s the same as when you go to a movie in the theater today. You go and see a movie because you know it has a great story and it has actors and characters you recognize. That drives people to go to the theater.

I think the evolution of VR is going to be the same. In order to get that headset on, it needs to be a really amazing story with actors and characters that you could relate to, or that you have always enjoyed watching your whole life. Those types of experiences will drive the masses. The gaming VR industry is booming, and it’s great. There are some amazing experiences. It’s the same with experiential VR. But you can only enjoy going to the Taj Mahal or some other location like that a couple times. You can only enjoy going to a concert a couple of times. You want stories that engage you, that you can immerse yourself in for a period of time and escape. It’s the same reason we go to a movie theater, to escape into a movie for a couple of hours. We forget the rest of our reality.

VentureBeat: VR isn’t taking off as fast as some people had hoped. Do you still have this faith that it’s going to be the next big medium?

Cloyd: Yeah. I don’t necessarily even need to have an opinion, because I’m a content creator in the VR world. I look at the tech companies, like Google and what they’re doing with Daydream. Or Oculus and Gear VR and Rift through Facebook. HTC, Microsoft, Valve and Steam. Those are the biggest, most powerful tech companies in the world. They’ve invested a lot of their time and energy and effort and money into creating this new medium. Because of that, it’s not going away.

In this day and age, when you make a standard movie–a lot of people are making movies today. Very smart filmmakers are making movies with iPhones. That market is becoming so saturated that it’s hard to get a movie distributed unless you’re a very big studio production, a Marvel film, a $100 million budget with a big P&A budget. It’s saturated. There’s so much content on the market.

Now you’re given this brand new medium in VR that isn’t saturated. It has a bigger landscape to tell your story. It has amazing tech companies already putting their marbles in the jar. I’m banking that the future of VR will always grow. It’ll become bigger and bigger, because of those companies and because of how amazing it is for future filmmakers to tell their stories in 360. 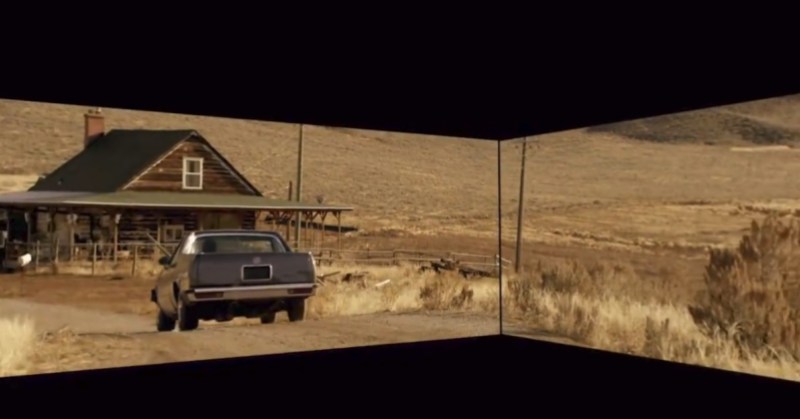 Above: A scene from The Humanity Bureau VR.

VentureBeat: Where do you want VR films to eventually go, as far as—what would be the state of the art beyond what we can do now?

Cloyd: I don’t think anybody really has an answer to that. We’re still in this position in VR where companies are trying to figure out how to provide better hardware, how to provide better software. Then you have guys like me who aren’t in those two areas. I’m in content creation. Sometimes I’m only given certain cameras that shoot in 6K or 8K or 10K resolution. But when you finish your movie and stitch your film and put together that final product, we’re only at a point today where we can deliver the content in 4K.

If you look at HMDs today, you have to take a cell phone and stick it in your headset. You’re still looking through two magnifying glasses at a cell phone two inches away from your face. In the near future we’ll have stand-alone headsets that won’t necessarily need phones. That’s the beginning of a very bright future, where headsets become smaller. Content resolution gets better. The picture quality gets better. Hardware and software catch up with filmmakers who want to make immersive content.

Over the course of time, it’s going to become a more valuable medium. I look at the evolution of the internet, of mobile phones. It took a long time for those to catch up to where they’re at today. People said they were never going to work. There’s a growth period that we’re in right now, and as things even out in regards to hardware, software, and content, it’s going to become a wonderful medium for everybody involved.

VentureBeat: Is this like the silent film era of VR right now, then?