Every time you hit an achievement in League of Legends, you could trigger “micro-savings.” That’s the big idea that enabled Blast to raise $5 million in funding.

Blast’s micro-savings tools will eventually work with most games, from hardcore hits like League of Legends to casual fare such as Candy Crush Saga. Micro-savings has become popular with credit cards, where your purchases can be rounded up to transfer small amounts of money into savings accounts with every purchase you make.

Newport Beach, California-based Blast wants to encourage people to save, and it is starting with the world’s 2.6 billion gamers, who can save and earn money while playing games that they love, said Walter Cruttenden, chairman of Blast and its related company Acorns, in an interview with GamesBeat.

“We decided to merge fintech and gaming,” Cruttenden said. “This is not cryptocurrency. It’s real money. It’s a way for people to save.”

Blast creates a wallet where you can store digital money. You can set “trigger savings,” which can generate interest paid on balances, reap dividends from “missions” that you complete in a game, and weekly payouts for those who are ahead on a leaderboard.

“As you play your favorite games, you can set triggers,” said Stephen Tyszka, chief strategy officer, in an interview. “I am a huge League of Legends player. Every time I take out a minion, I save a penny. A turret, a quarter. If I win the match, I save a dollar.”

In some cases, you are saving money on your own through the Blast Wallet, transferring money from the equivalent of a checking account to a savings account. In other cases, you are earning new money from game companies that will pay you to stay highly engaged with their games.

It’s a twist on “gamification,” which offers game-like rewards for non-game applications.

“In games, it has been frustrating,” Tyszka said. “You hit new levels and nothing happens. You get the same bells and whistles.” 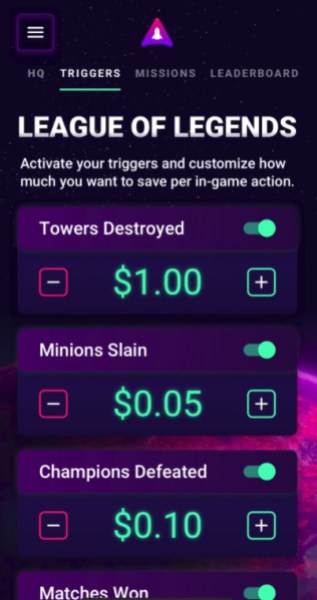 Above: You can save money for every achievement in League of Legends.

Blast is in beta testing and it will launch soon. Blast’s “trigger save” feature enables gamers to set triggers based on key in-game achievements such as enemies defeated, turrets destroyed, and matches won in PC titles such as League of Legends and Counter-Strike: Global Offensive.

The app also enables mobile gamers to save and win money automatically while playing any Android game, like Candy Crush and Clash Royale.

Players can earn dividends through “missions,” which allow the user to test new games or take their favorite games to the next level. Additionally, gamers compete for ranking on a Blast “leaderboard” through missions accomplished, with half of all users receiving a portion of the weekly leaderboard payout, based on rank reached, up to $10,000 each week, for the top tier. The weekly payout schedule will be announced by top gamers and streamed on Twitch.tv.

The mobile version does not require developers to integrate a software development kit (SDK). The aim is to increase retention and re-engagement for games, and it turns gamers into investors.

“It’s hard to get publishers to install one more SDK,” said Armin Collosi, head of partnerships for Blast, in an interview. “It’s instant. Game developers and publishers are already marking the points in the game where you have an achievement. We use those points for triggered savings.” 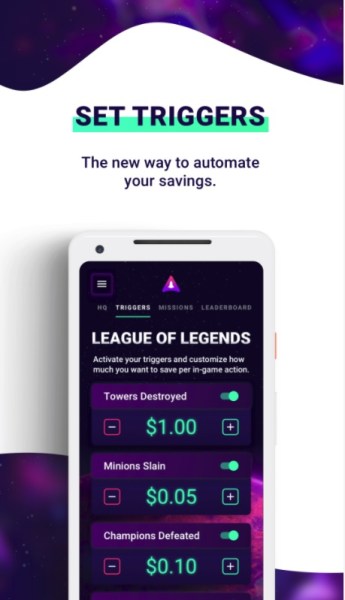 Above: Blast lets you choose the triggers that prompt micro savings.

As the balance builds, a user can elect to let it grow, use the funds for in-app-purchases in their favorite games, move it to a partner institution to be invested, or just take it out of the wallet and spend it.

Investors in the $5 million seed round include the Forbes and Roth families, Core Innovation Capital, Great Oaks Venture Capital, Snowmass Private Equity, Wilson Sonsini Goodrich & Rosati, and others. The funds will carry the company through its current beta program and launch, expected in the second quarter. Blast offers protection from overdrafts, the company said.

Cruttenden said that Blast was started in the past year to focus on gamers. But the idea started with Cruttenden’s Acorns, which built infrastructure to move and invest “micro monies,” or very small amounts of money. Blast builds on this by allowing you to do more things with your digital wallet.

Above: Blast will let you save money in a wide variety of games.

About 70 percent of the population doesn’t even have $1,000 in savings, Cruttenden said. One of the keys here is that the amount of money transferred each time is small. It’s a painless amount, but over time, it really adds up, Cruttenden said.

“Whenever you can break a service into small increments and distribute it widely, it works,” he said. “It worked for Coca-Cola, and they bottled it.”

Blast has 25 employees. Over time, they will add platforms including Android, the PC, the consoles, and iOS.