Blok.Party is using the transparent record keeping of blockchain to create unique creatures for a tabletop game console called PlayTable. It combines a large 24-inch touchscreen game console with tabletop games reminiscent of Dungeons & Dragons and Settlers of Catan.

The PlayTable is the latest smart toy-game hybrid that seeks to combine physical and digital toys and games, with the added innovation of using blockchain to track digital collectibles. It won’t be easy for a San Francisco startup to take on other console game companies, but it has packed a lot of innovations into its product.

“The toy industry has been lacking,” said Jimmy Chen, CEO and founder of San Francisco-based Blok.Party, in an interview with GamesBeat. ” They tried to create smart toys. but they were more expensive and less accessible. We think this is the future of smart toys. Anybody can take an existing toy and put data on it with a sticker and give it characteristics and sounds. And we’ll make these games into real social experiences.”

The console will debut in the fourth quarter of 2018 for $349, and it will have a number of unique features. It will have tabletop toy game characters — similar to Activision’s Skylanders digital toys — such as dragons or mages.

But at the bottom of the characters are a radio-frequency identification (RFID) tags that can be read by the touchscreen. Those characters can be uniquely identified and tracked through blockchain, which is the underlying identification technology behind cryptocurrencies such as Bitcoin. It is an immutable, transparent public ledger, and it allows a digital collectible such as a toy to be tracked on different platforms. If you buy such a toy, the blockchain will ensure that you own it, and it will record the unique characteristics of the toy, such as how high a level the character has. 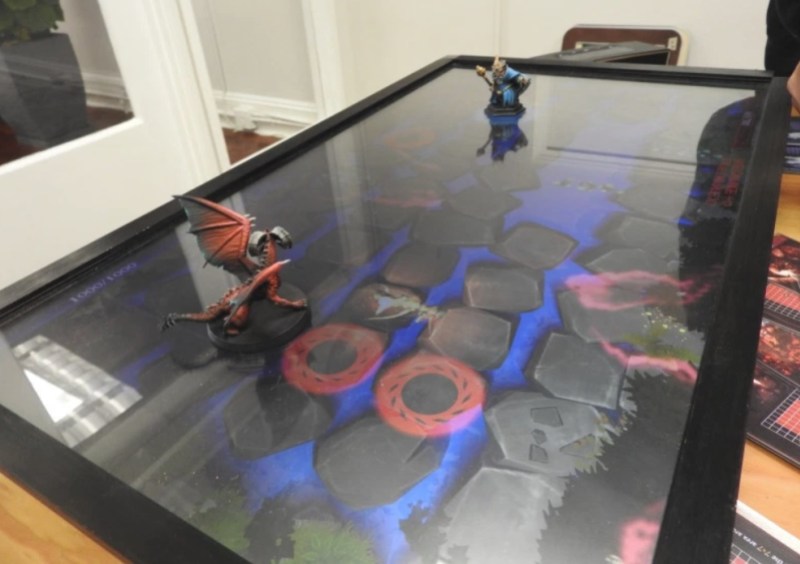 Above: Battlegrid is one of the first games for PlayTable.

Chen showed me the Android-based prototype console working with a fantasy card game called Battlegrid. I had a dragon, and he had a mage. We set the toys on top of the touchscreen and they came to life, making sounds based on the nature of the characters. We took turns throwing cards on the table, which recognized the cards and then triggered reactions such as the sound of dragon blasts or roars.

You can also create your own toy and put an RFID sticker at the bottom of it. Then it becomes smart, and it will have its own characteristics, as defined through the game. This means a dragon could fight against something like a Pepsi bottle in a game, if you wish. You could also create your own game piece with a 3D printer.

“We’re differentiating ourselves from other smart toys by incorporating the toy into the gameplay,” Chen said. “It offers new gameplay that isn’t available anywhere else.”

The PlayTable is designed for one to eight players. People can control the on-screen action with their hands, or they can use smartphones. The introductory price will be $350, and the normal price will be $600. That will include the Battlegrid game. About 25 Unity-based games are in development, and some of them include digital versions of Catan, Codenames, Ticket to Ride, and Texas Hold ‘Em. 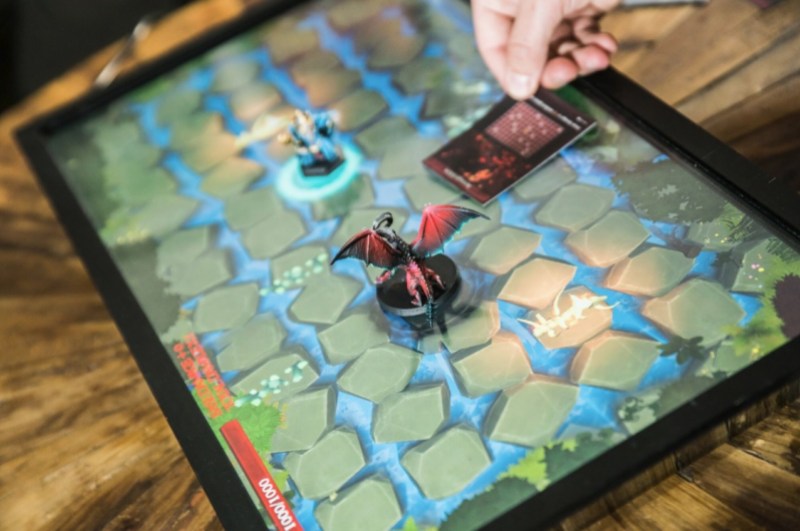 Chen said it started as a garage project.

“I’ve been a board gamer and video gamer for more than 10 years,” he said. “I had an obsession with the Catan titles. I would make custom Catan games. I wanted to make them interactive and fun. Then toys to life became a big phenomenon with Skylanders. I thought it was a magical experience when I went to Toys ‘R Us in Times Square and saw so many floors of toys.”

That led Chen to start working on prototypes.

“We saw it would be possible to create do-it-yourself kits to go with this, where the expandability is only limited by your imagination,” Chen said. “But our focus will be on internal games like Battlegrid,” which will have six characters and 30 cards.

PlayTable’s operating system is built on top of the Ethereum cryptocurrency’s blockchain. That delivers infinite character customization. You can bring your own toy to PlayTable and see it come to life inside a digital world as a unique, collectible piece. With the RFID tags, the game characters will be portable, allowing you to take your unique character to your friend’s house to play on another PlayTable. You can also trade the characters, with the transactions being verified on the blockchain. 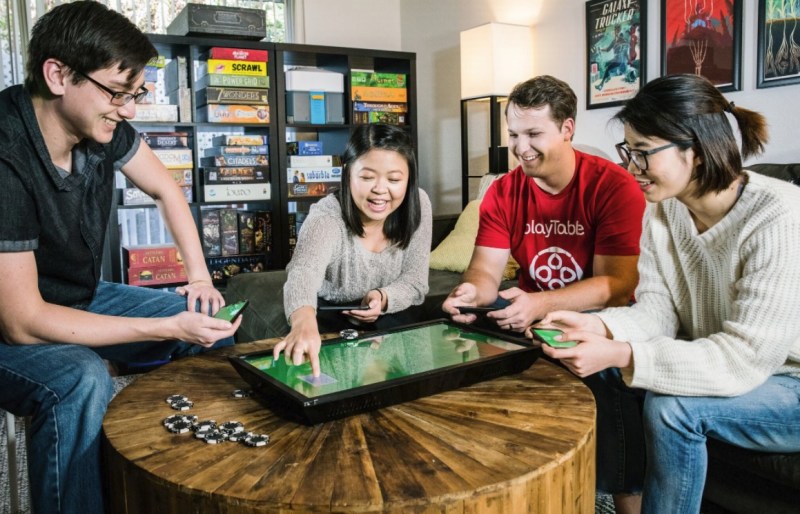 Above: PlayTable can entertain one to eight players.

The company has 15 employees, including Jason Ge, a former R&D executive at Huawei; Sam Lee, Blok.Party’s vice president of hardware, and whose past experience includes working on the Amazon Echo and iPhone; and Dave Mata, who worked on games at studios such as uCool. Preorders will start in March. The company said it has a waiting list of about 100,000 people, after it did a marketing test last year. The company hasn’t identified any partners yet, but it is talks with a number of companies.

Blok.Party has been working on the project for more than two years. During that time, the toys-to-life genre started by Skylanders and ebbed and flowed.

“Toys-to-life 1.0 was Skylanders,” Chen said. “We are taking this to the next level.”