Mario and Zelda have made appearances on the Switch that have brought new vitality their franchises, with Super Mario Odyssey and Breath of the Wild being some of Nintendo’s most acclaimed games ever made in its decades-long legacy. Can Kirby’s Switch debut also shoot its franchise to new heights of creativity and excellence?

Kirby Star Allies comes out March 16. It’s another 2D Kirby side-scroller that plays like many of the pink hungry hero’s other outings. Kirby can suck in enemies and steal their abilities, giving him access to a wide range of moves. Star Allies tries to stand out by featuring four players simultaneously (if you’re playing alone, the computer will control the other character).

But this doesn’t do much to bring any new ideas to the series. Heck, Kirby’s Return to Dream Land for the Wii did the whole four player co-op thing. So, what makes Star Allies special? 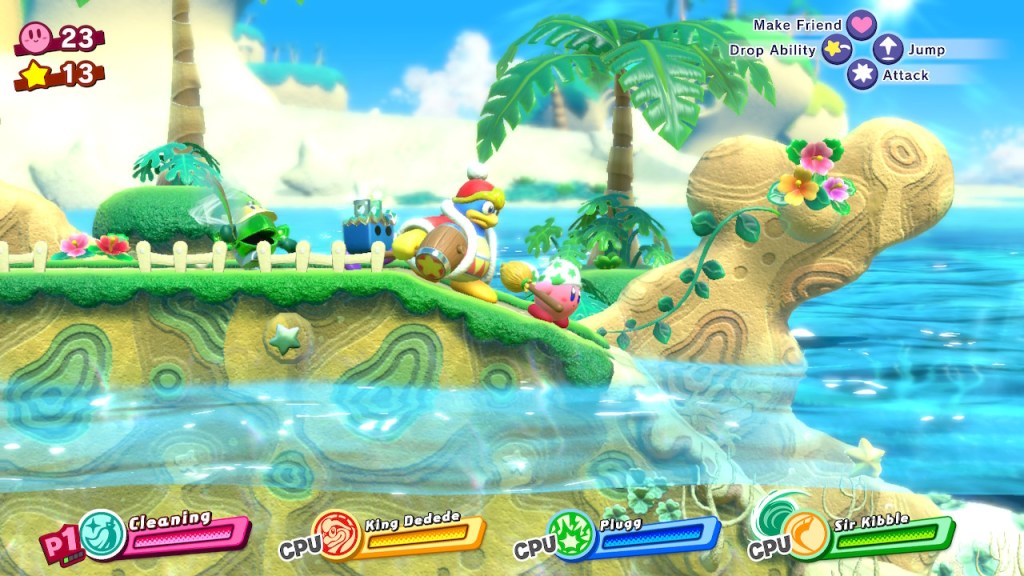 It’s difficult to be too hard on Kirby. The character himself is so adorable, and his world is colorful and cheery. And while we’ve had plenty of games to get used to Kirby’s signature copying ability, it’s still fun to swallow a new enemy and see what powers the round guy gets.

The Kirby formula has worked so well that it’s been relatively unchanged for decades. Star Allies plays like Kirby Super Star, which came out for the Super Nintendo back in 1996. Even Kirby’s ability to turn enemies into player-controlled friends comes from Super Star. But while Super Star only supported two players, Star Allies stuffs four on the screen.

And the screen really can feel stuffed. When everyone is running around and attacking, the screen becomes cluttered. It can be easy to lose track of yourself. But playing with friends can still be fun. Sometimes, Star Allies requires cooperation to combine abilities to get through puzzle rooms. For example, a character with the ability to turn into a rock can work with another player who can use ice attacks to shoot the rock character out like a curling stone, which can give him momentum to reach out-of-the-way switches. 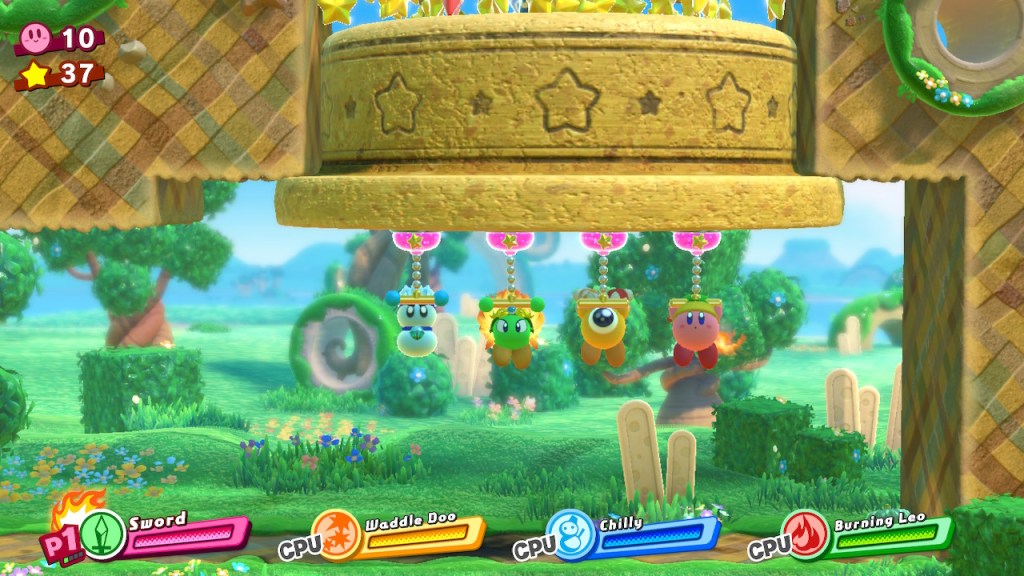 Above: Not exactly a brain-buster.

But even a lot of these puzzles become boring. You don’t have to think too hard about how to solve them, since every room gives you the exact abilities you need. Are you in a place with a cannon that has an unlit string attached to it? Lucky you, a fire enemy is right there. Guess what you’re supposed to do.

So while playing with friends can be fun, actual cooperation with them is rare. You’re spend most of the time running the same path, fighting the same enemies, and rarely combining powers to get through (mostly optional) puzzles.

Of course, my favorite part of the game is the one I don’t really want to talk about. I’m not going to give away the final boss, but it’s the one time that Kirby Star Allies does anything creative or interesting. You have to give the game some credit for ending on a high note. 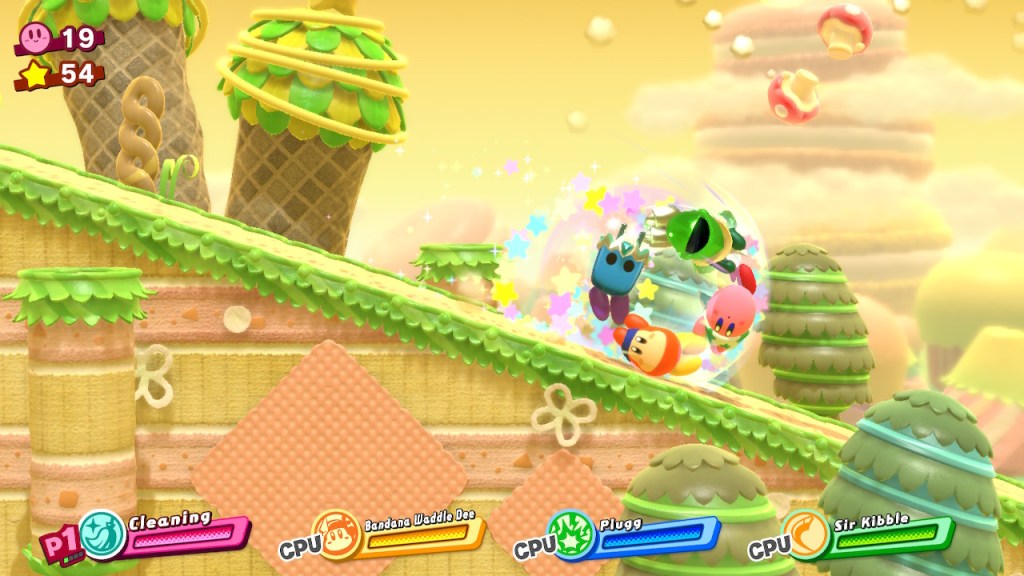 This is the 12th entry in the main Kirby series, which started in 1992 with Kirby’s Dream Land for the Game Boy. With the debut on the Switch, an exciting new system from Nintendo that has helped revitalize the company, you’d think that this would be a good time to try something new. But Star Allies constantly plays it safe. You’ll find little here you haven’t seen in past Kirby games.

Even Kirby’s two 3DS entries — Triple Deluxe and Planet Robobot — did some clever things with 3D effects and level designs. Star Allies takes a simpler path, rarely doing anything to twist things up and offering few new mechanics. Even the new copy abilities — Staff and Spider — don’t feel all that different.

The small assortment of bonus games are also uninspired. You have Time Attack and Boss Rush-style modes and then two incredibly basic mini-games. One of them has you swinging a bat a meteor. You just have to time two button presses on two meters to hit the meteor as far as you can. It’s like a basic golf game with nothing but the swinging. But you can use a Joy-Con so you can swing instead of press a button. Weeee. 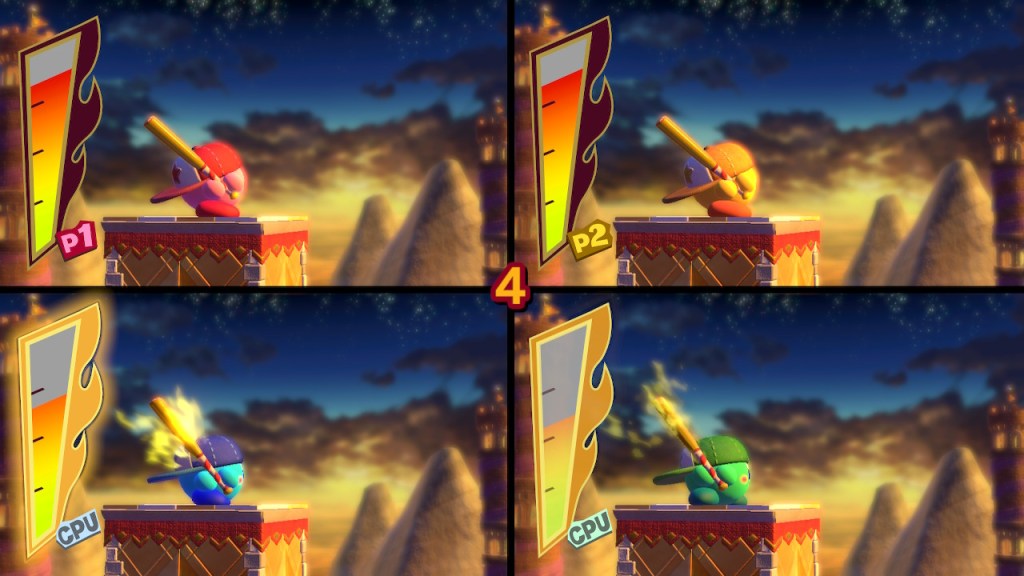 Star Allies doesn’t even run well. You’d hope that a rather simple side-scroller could hit 60 frames per second, but most of Star Allies runs below that. This results in a game that looks pretty in screenshots but sluggish when you’re actually playing it. And every time you go through a door and access a new part of a level, you have to wait for a loading screen, something that makes the pace of this adventure feel slower compared to past Kirby games.

Kirby games have a reputation for being easy and short, and Star Allies feels even easier and shorter than most of his outings. I finished in about five hours and died a few times. By the end, I had about 70 extra lives to spare. 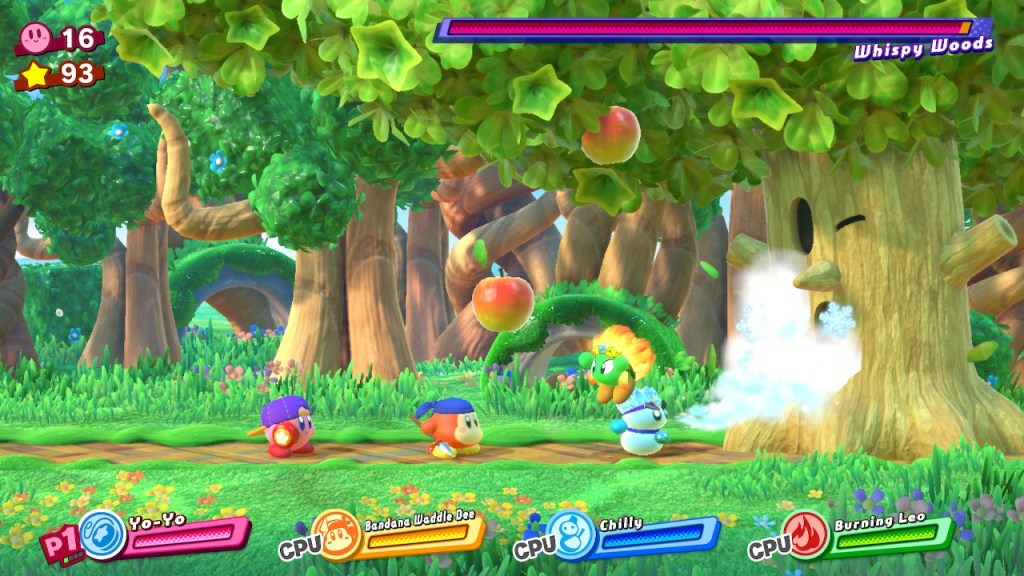 Above: Yup, this guy again.

It’s a shame that Nintendo didn’t take this opportunity to be more creative. The Kirby franchise is always throwing new ideas at spin-offs like Canvas Curse and Epic Yarn, but now the main series has done little to evolve.

But even as a standard Kirby adventure, Star Allies is boring. Its levels are predictable, the puzzles are obvious, and the four-player co-op adds little besides the literal ability to have four people playing at the same time.

Star Allies is a serviceable side-scroller, but Kirby’s Switch debut should be more exciting this this snoozer.

Kirby Star Allies comes out for the Switch on March 16. Nintendo provided us with a code for this review.