In the last week of my life in the survivalist civilization simulator Eco (which is out now in Early Access on Steam for $30), I attempted to destroy the friendly bartering/communist ecosystem that was keeping me and a dozen other players fed and advancing through the sim’s various skilltrees. I was of the opinion that we needed capitalism. The profit motive, you see, would encourage people to work toward larger goals instead of their personal projects. Maybe that will still happen, but for now, my capitalist dream has led to bickering, greed, and a financial crisis. And I’ve decided to destroy my currency’s value in response.

For anyone looking for a shortcut explanation of Eco, it’s Minecraft with a lot more systems. Developer Strange Loop Games created it partially as an educational experience about the effects humans have on the planet, so Eco models pollution, wildlife populations (our hunting has almost driven multiple species to extinction), and plant populations. These systems are interdependent, so if you cut down a forest, you’re going to damage some animals that rely on the trees for food. We’re still relatively early on, so as long as we practice a sliver of moderation, we can’t do too much permanent damage.

For me, the most exciting system in Eco is the economy, which is the part of the game with the fewest algorithms because it’s all driven by the decisions of the human players. Early in the game, before you can mint an official currency backed by something tangible like gold, you can build a store that accepts what is equivalent to a company credit system. My “(Jeff Grubb Credit)” — or the Grubbuck, as I called it — has served as the backbone of my store since the second real-world day of our planet. But now that it’s time for our society to move to a minted currency … we are encountering problems.

You see, since I was the first person to create a store, people have more Grubbucks than any other currency, and people assume that must mean that the Grubbuck is vaulable.

Here’s a secret: The Grubbuck is almost worthless. 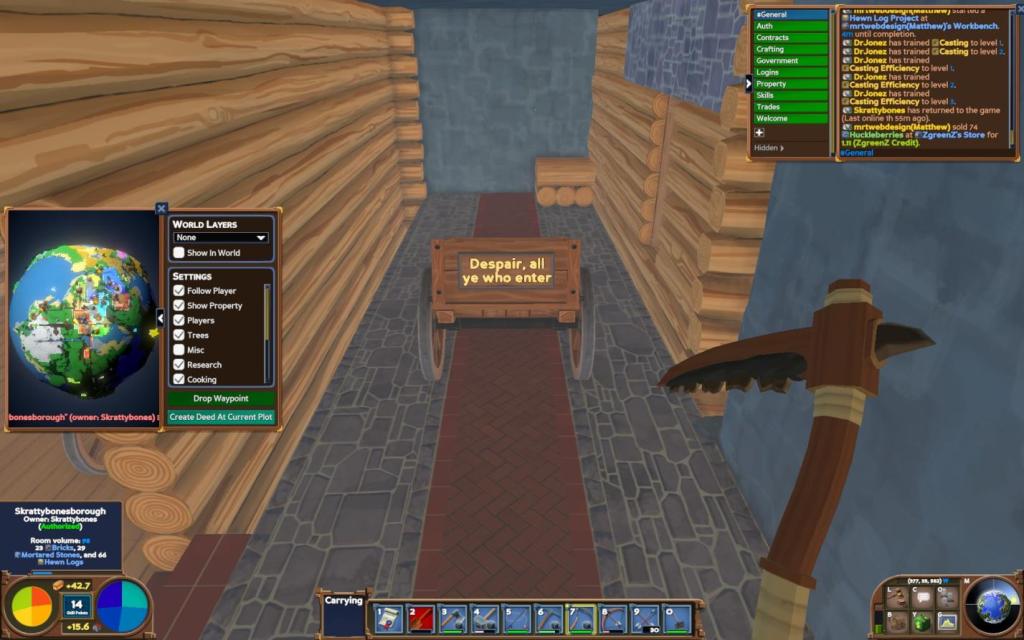 Above: Oh, I despair.

I made a miscalculation early in the game. I assumed that people would value the tier-2 building item bricks much more than they did. So my store is buying things like stone and sand for Grubbucks, and I’m selling bricks and a few odds-and-ends. But the problem is that while people were earning Grubbucks, they didn’t spend many of them. It turns out that people only needed a couple dozen bricks for certain projects that we worked on together as a society.

Another store did pop up, and this one was selling food for Zackbucks. I could see that store was immediately outperforming mine. I didn’t say anything out loud because even if people weren’t buying anything from me, it was still valuable to me that they were selling resources for what I knew was a worthless currency.

It is now time to shift to the new currency and people are assuming we need to do an exchange where you trade in your old store credits for the new universal Haypennies currency.

This is a terrible idea, and we argued about it to the point of a stalemate this week. Because I was the person running the store, I have the full picture of how people acquired my currency. One person sold me their sawmill scraps that I used to make a basic building item (I don’t think they ever purchased anything in my store), a couple of others did some contracts for me to get stone out of the mine, and a handful of others just happened to have resources nearby that I was buying that they didn’t need.

The Grubbuck in no way reflects a players’ wealth, their purchasing power, and especially their contribution to our society so far.

Now, if you’ve followed my Eco diary on Twitter, you will know that I drove us to this point and played the role of the evil capitalist. And if we did the currency exchange, I would theoretically get the most because I have an infinite number of Grubbucks. So I don’t have some secret motivation here to come out ahead of everyone — and that’s the entire point.

We're 2 days into our 13-player civilization in Eco (Minecraft with way more systems), and we are already at each other's throats about whether we should have stores or just help people with our specialization items as they need it. It's a total capitalism/communism argument.

Shifting to a new currency is complicated, and it’s not like we have time to figure this out with long, drawn-out processes. I haven’t mentioned this yet, but in Eco you have 30 days before a meteor crashes into your planet. We have about 24 days and change before our meteor strikes.

My first suggestion was a transitional period where my store and the other accepted the old currency without buying anything new. This would give people with savings time to spend their credits. I would then want us to create a stimulus package where everyone gets the same amount of the new universal currency so that everyone is bought into it and has something to spend. This would kickstart our economy because everyone has different purchasing needs, so everyone could set up a store that could succeed. If one person starts with more of the wealth, people are better off trying to compete for that person’s patronage.

But the people — and especially the person who created the mint and in effect controls the new universal currency — would rather we just do an exchange. He had the most Grubbucks, and he wanted to keep his wealth. People argued that people shouldn’t lose what they have accumulated just because we’re moving to a new currency — and I get that, but it ignores an important point: the haypenny isn’t just replacing Grubbucks and Zackbucks, it’s also going to replace a significant portion of the barter economy that has served as the primary transactional system up to this point.

I think it’s an awful idea to only reward people who acquired the worthless Grubbuck and to put the people who did repetitive labor tasks in the mine and bartered at a disadvantage.

But I’ve found a solution to my problem: inflation.

Remember how I said I have an infinite number of Grubbucks? Well, I’ve decided to put a lot more of those into circulation. This morning, I began issuing “backpay” to workers. I gave out around 1,000 Grubbucks to everyone. On top of this, I began offering contracts that paid hundreds of Grubbucks for iron ore and other metals. The result? We’e gone from around 1,500 Grubbucks in circulation to 18,500. One person has 5,000.

My currency is now effectively worthless, and most people have around the same amount. So even if we do an exchange, people are going to end up with similar totals.

I don’t know how this is going to go down, but my guess is that — at worse — everyone will get mad at me instead of thinking that some nebulous new exchange system screwed them over. And I prefer that because that gives them a face to hate and work against instead of feeling helpless. And in a few days, I bet we’ll have forgotten this for some new crisis while we all happily use haypennies in our stores and contracts.