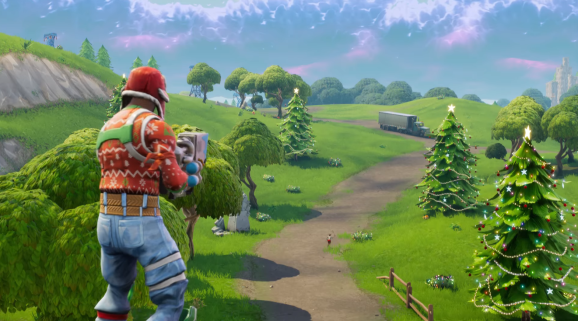 A hundred Christmas trees jump onto an island....

Hit game Fortnite is now a hit on mobile as well, and you can’t even get into it without an invite yet. Epic Games sent out the first wave of invites earlier tonight, and apparently that was a sizable wave. Fortnite is already the No. 1 most downloaded iPhone game in the United States right now, according to data provided to GamesBeat by app-tracking firm Sensor Tower.

Fortnite for mobile brings the same last-player-standing action to iOS smartphones that players have enjoyed on PC and consoles for the last several months. It has 100 people drop on an island in an effort to outlast everyone else.

Fortnite is racing to mobile as it battles to establish supremacy on the platform following its takeover of battle royale genre on console. On PC, the game still faces some competition from PlayerUnknown’s Battlegrounds, but Epic’s game has all of the momentum right now.

And now today, Fortnite is on mobile. Epic couldn’t buy publicity and hype like this for its mobile release, and it didn’t. Drake and Ninja found each other organically, and Epic did not pay Drake to show up and play.

Epic plans to send out more invites soon, and you can still sign up for an invite on the publisher’s website.