Loom Network is announcing that it has a next-generation blockchain platform that will enable developers to run huge games — as big as World of Warcraft — to run directly on blockchain, or the public ledger technology behind the explosion in cryptocurrencies.

Cryptocurrencies such as Bitcoin and Ethereum have become valuable, but they are slow at updating transactions. CryptoKitties, a popular game where you buy and sell and breed kittens, brought Ethereum to a crawl because of the number of transactions demanded every second. Blockchains are decentralized and spread out across many computers across the internet, enabling them to keep accurate and transparent records. But that decentralization means they are slow to update.

The Bangkok-based Loom Network claims it has created a blockchain infrastructure that is faster. It says it enables large-scale games and social apps to be built on top of the blockchain. The company said it has raised $25 million in funding.

When blockchain is used in this manner on Loom Network, users will own a copy of their data and servers cannot be shut down arbitrarily without community approval. In fact, the community at large will always have the final say with any decentralized apps (DApps) that run on the blockchain. It is the purest form of digital democracy for the future of the internet, the company said.

“With Bitcoin came the world’s first blockchain, a decentralized ledger of financial transactions that cannot be counterfeited, forged, or modified,” said James Duffy, cofounder of Loom Network, in a statement. “Ethereum took it a step further by allowing developers to upload indelible pieces of code into the Blockchain, called ‘smart contracts.’ Loom Network is the next logical step in this evolution — it allows developers to run these unstoppable applications on a massive scale.”

Loom Network provides DApps with much greater scalability by running each DApp on its own blockchain — called a DAppChain — which runs in parallel to an Ethereum smart contract. With Loom Network, you could run a million CryptoKitties simultaneously without having to worry about network congestion or interrupting other important transactions, the company said. 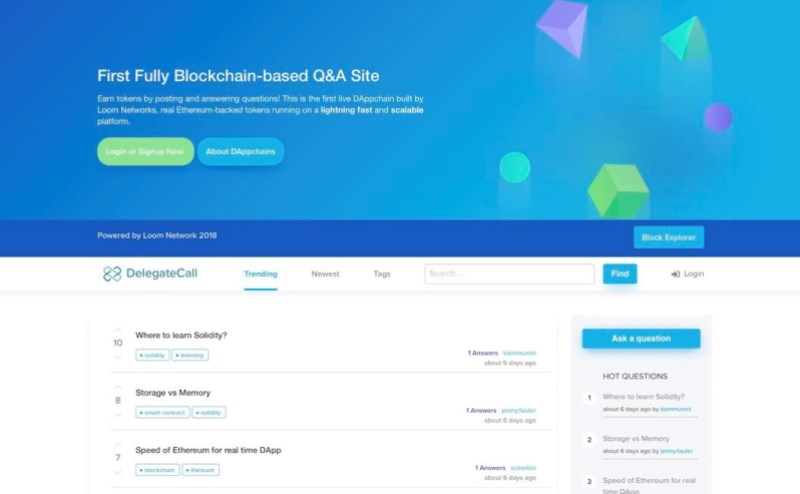 Above: Loom Network is speeding up blockchain. Delegate Call is an example.

Since the rules on a DAppChain can be customized based on an individual DApp’s needs, Loom Network makes it possible to run big apps on the blockchain without worrying about scalability, decentralization, or censorship from a third party. Developers can use Loom Network’s software development kit (SDK) to quickly build their own blockchain-based DApps without having to understand the underlying blockchain infrastructure.

“I foresee a future where the Internet is built up of large-scale decentralized applications that are community-owned, forkable, transparent, and immune to censorship or control from a single party,” Duffy said. “Changes to the code are voted on by community members, so once a developer releases an application to the world, it takes on a life of its own and he no longer has total control over it. Applications become like living, breathing entities. There’s a kind of organic freedom there that’s almost poetic.”

To highlight the concept of DAppChains, Loom Network recently released DelegateCall, a social question-and-answer site for developers that runs entirely on the blockchain. On DelegateCall, users can ask and answer questions about blockchains and DApp development. DelegateCall gives financial incentives for users who provide the highest quality answers. When questions and answers are voted up by other users, rather than simply earning useless karma points, they can exchange their karma for an ERC20 token, which can be sold for real money.

Loom Network is also responsible for CryptoZombies – the resource on learning how to build Ethereum DApps. CryptoZombies teaches developers how to write smart contracts in a series of interactive tutorials in which users build their own crypto-collectible Zombie Game. Since it’s launch just a few months ago, over 130,000-plus developers have used CryptoZombies to learn DApp development.

Loom Network was founded by Matthew Campbell, Luke Zhang, and Duffy in 2017. It is part of the TechStars accelerator.