Though roughly 2,000 apps are now using Apple’s ARKit, the iOS augmented reality feature has been looking for its killer app — and may have found it. Developer Abhishek Singh rebuilt Capcom’s groundbreaking 1-on-1 fighting game Street Fighter II using ARKit, audio from the original game, and 3D character models from Street Fighter IV, enabling players to bring the “world warriors” into real-world settings.

Singh calls his demo Street Fighter II: Real World Warrior Edition, and anyone remotely interested in AR, video games, or the Street Fighter series will appreciate what his two-minute-long YouTube video demonstrates. While early ARKit games such as Pokémon Go have successfully overlaid cartoony characters on real-world backgrounds, the device-generated people and objects in this video are at times only a couple of steps shy of realistic. 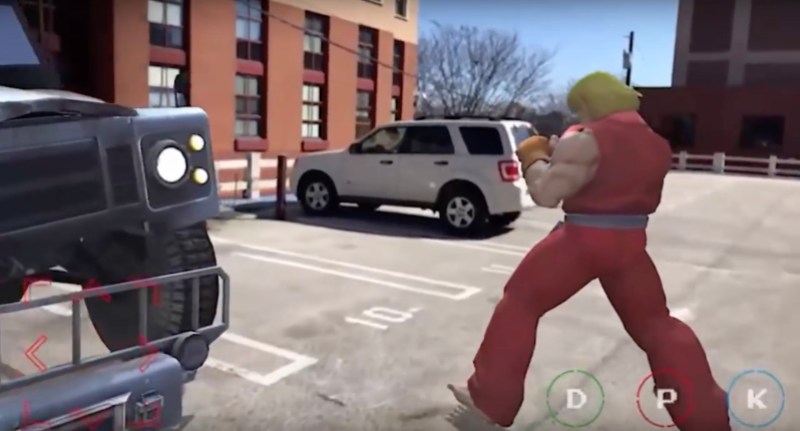 In addition to demonstrating two-player fights on top of tables, on actual streets, and inside a building, Singh re-creates Street Fighter’s classic vehicle-smashing bonus stage in an outdoor parking lot. As the viewer’s vantage point changes in realtime, so does his perspective on character Ken and a substantially real-looking car that breaks as it absorbs punches, kicks, and fireballs. Even the shadows on the ground look plausible.

The caveat is that this is just an ARKit demo, and not officially sanctioned by Capcom, so it likely won’t be available to play any time soon. Having previously used ARKit to recreate an iconic, haunting scene from the horror movie The Ring, Singh suggested to Cult of Mac that he held back on fully developing the game until he knew what Street Fighter’s creator would say about it. Since Capcom has previously worked with independent developers to release smart crossover titles such as Street Fighter X Mega Man, it’s possible that this AR version of Street Fighter could become a reality for everyone. If not, it will certainly pave the way for something similar with different characters.