Sega’s Yakuza 6: The Song of Life on the PlayStation 4 is the final time we’ll be able to run around as lovable gangster Kazuma Kiryu. It has all the hallmarks of previous titles: a clever and sometimes goofy sense of humor, a peek into the criminal underworld and nightlife of modern-day Japan, and lots and lots of punching. Just as before, it’s an open-world game centered around a gangster plotline.

Yakuza 6 is only the second game I’ve played out of the franchise, and it strikes a significantly different tone than the one I was expecting. Its main story tries to take on heftier subjects. It ponders the nature and extent of familial relationships. And it examines Kiryu’s legacy and how values and attitudes change over time.

It’s a send-off that tries to be something more than just mafia brawls and minigames — and it’s only partially successful.

Buffet of side quests 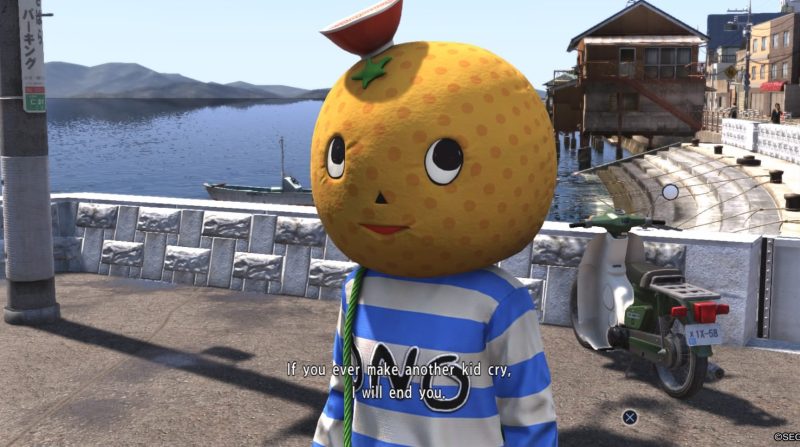 Above: Kiryu Kazuma is the hero we need.

A lot of people play Yakuza games for the memes, and they are correct. Many of the images you see online are of Kiryu in odd situations, like hiring a chicken named Nugget to help run his real estate company. These come from the side quests, which are often offbeat and charming and bring ample delight to roaming around bustling Kamurocho and sleepy fishing village Onomichi. You can track down kitties for a cat café and fight off gangsters as an orange-headed mascot. Troublr, an app on your in-game phone, alerts you when an opportunity arises to lay down some vigilante justice.

Some of the side quests comment on societal issues — like a man whose relationship is ruined by his obsession with racy live chats with cam girls or a woman who is being scammed by a cult that’s something like a spiritual pyramid scheme. Others cleverly draw from pop culture, such as a girl who tells you that she has the power to “time leap” as a method of traveling to the past — a clear reference to the movie The Girl Who Leapt Through Time.

Along with the side quests, minigames also give you experience points. You can play darts, do squats at the local gym, and sing karaoke. Sometimes, it gets too real like one where you have to calm a crying baby. If you know a new parent, please give them a hug — because babies are super fickle and I failed that minigame like four times in a row.

This is all to say that it’s a ton of fun to explore as Kiryu. It never really gets boring, even if most side quests do end with you busting some heads in and then eating some ramen.

A pleasant change of scenery 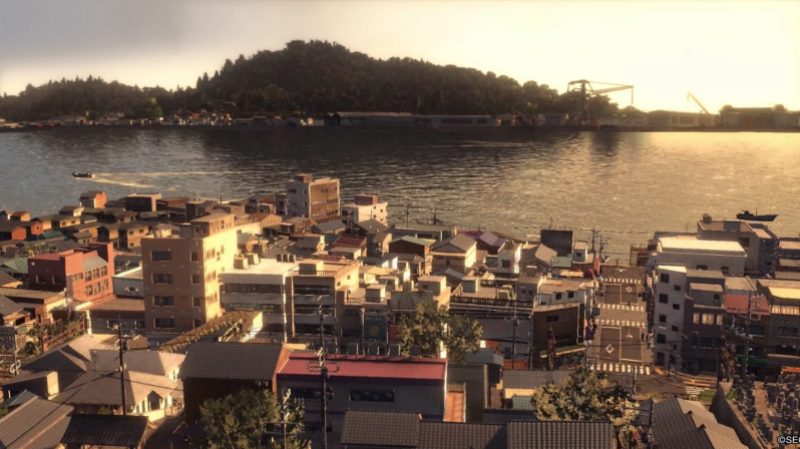 Above: The sleepy city of Onomichi, Hiroshima.

As fun as it is to traipse around Kamurocho, Hiroshima offers a welcome change in scenery. You spend about a fourth of your time in the small town of Onomichi with its winding back alleys and lovely view of the ocean.

Though Hiroshima isn’t as jam-packed with activities as Tokyo, the ones it does have are more involved. You can, for instance, recruit local hoodlums to fight for your clan. In these battles, you deploy different “units” to fight for you instead of getting your hands dirty yourself. A baseball management game is also available, though I have to admit that it didn’t really do much for me. As GamesBeat managing editor Jason Wilson knows, I’m hopeless when it comes to sports.

More importantly, though, Hiroshima widens Kiryu’s world and shows that not everything comes back to a singular neon-lit neighborhood. Yakuza 6 tackles expansive themes, and a conspiracy lies at its heart that goes far beyond just street-level criminal activities. The game also explores cultural differences — like the ones between the old yakuza and the new, along with the contrast between the laidback rural attitude of the Onomichi natives and a buttoned-up city slicker like Kiryu. 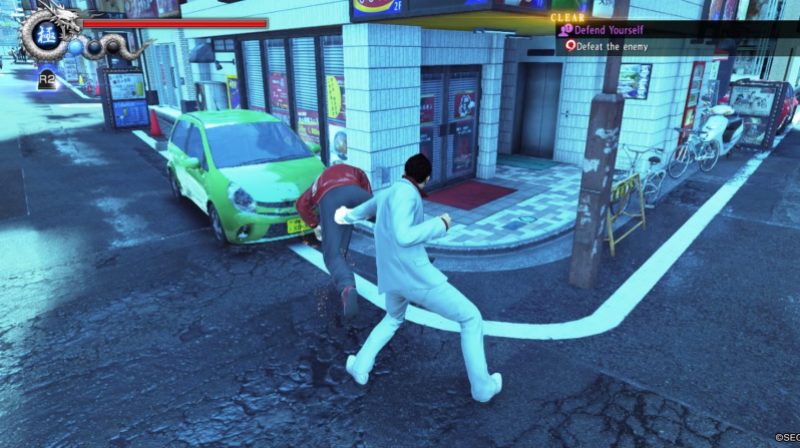 Above: That’s what you get for interrupting my side quest.

While combat felt pretty good — the controls were smooth and fairly precise — I was disappointed by how simple the fights felt. I enjoyed toggling through different fighting stances in Kiwami, but Yakuza 6 didn’t have anything like that. Instead, it relies mainly on combos or activating a limited set of special moves. A streamlined skill tree enables you to unlock more combos but they aren’t that exciting because they don’t often change your fighting strategy.

Enemies also didn’t have as wide a variety of attacks, which made them simple to take down. Even the boss fights didn’t feel particularly challenging. It was often easy to spam a few moves without really having to think about strategy. A running kick, for instance, could often wipe out a horde of minions or at least knock down a stronger enemy.

The destructible environment, while entertaining, also prevented the difficulty from ramping up significantly. You can’t equip weapons, but you can pick up nearby objects like bar stools or potted plants. These are plentiful, and when you use them to wail on enemies, you knock off a good chunk of their health in one go.

While I don’t think Yakuza 6 needs to have super intense battles or anything, I would have at least liked to see different combat styles that forced me to think a little more on my feet. 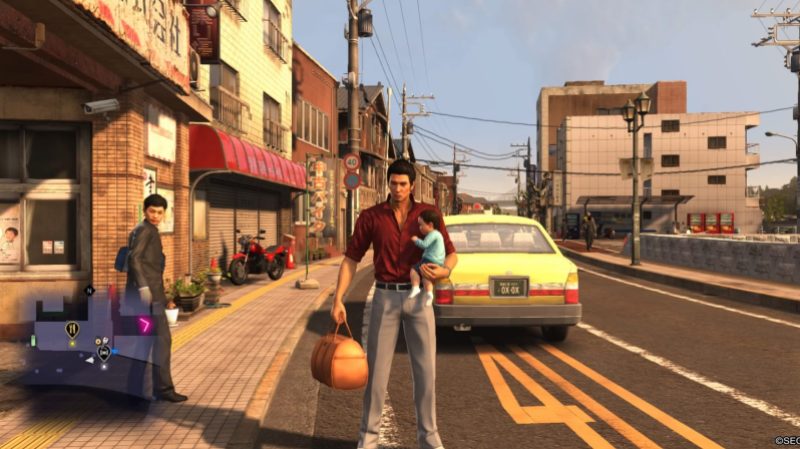 Above: A scene from the classic Japanese remake of Kindergarten Cop.

I did appreciate Yakuza 6’s attempt to explore deeper themes, but I felt like it came up short when it tried to address topics like familial relationships and intergenerational shifts in value. It often vacillated between melodrama and emotional vacancy, and most of the beats simply didn’t land. It did a great job with one or two of the characters, but most of its angst felt unearned. The final plot reveal was also unsatisfactory, though I’ll credit the writers for inventing a villain who’s pretty irritating and felt good to take down.

One of my main gripes is that Kiryu’s relationship with his daughter figure Haruka Sawamura sorely lacked development. In fact, he seems to have a closer relationship with almost everyone around him than he does with her. I was really disappointed by one of the ending scenes, which I felt was a missed opportunity for a tender moment between the two of them.

Ultimately, Yakuza 6 is about fathers and sons even though it really wants to be about families. I’d say that all the women drew the short straw, their emotional needs and grief shunted into the background. The game narrowly portrays motherhood as simply an instinct to nurture and protect while fatherhood is complex and avails itself a range of motivations. The men still follow tropes to be sure — this is a game, after all, where you can punch someone into being a better dad — but you get the feeling that you’re supposed to take their feelings and struggles seriously.

Nearly all the women characters had problematic storylines. One woman leaves her child behind to escape her abusive husband, and she feels an immense amount of survivor’s guilt. This is sorted out, though, when a man yells at her and tells her that she can’t just give up on being a mother. She thanks him, and then, she’s just magically OK afterward. In another side quest, you meet a man who’s a “whipped” husband whose wife walks all over him. With Kiryu’s help, he yells at his wife to shut up, and that somehow saves their marriage. And no one seems to care what Haruka wants — not even Kiryu.

This doesn’t even touch on the uncomfortable live chat minigame, which involves videos of real actresses stripping. I don’t expect Yakuza 6 to have an ultra progressive attitude toward women or anything — hostess clubs and strip clubs are, after all, factually a part of gangster and business culture, especially in Asia. And the story is ultimately about Kiryu and his role as a father. Little recurring details in the game, however, prevent it from being emotionally complex and fully exploring the idea of family, which doesn’t do it any favors when it tries to have grand dramatic moments. 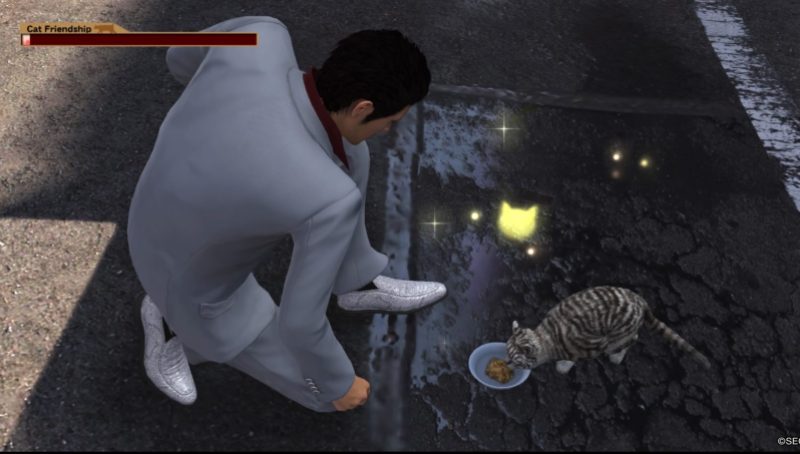 Yakuza 6 has an ambitious narrative, alternating between lighthearted and dramatic. Unfortunately, it doesn’t give its characters enough love and care to truly pull off the pathos. But its sense of humor is impeccable. Its protagonist is lovable. And Sega has created a world with plenty to do.

The game’s strength is really in the personality of its locations. Little snack-sized encounters with folks around town are usually a lot of fun, and I never really got tired of exploring. My interest dipped, though, whenever I had to endure a lengthy battle sequence or sit through cutscenes. Occasionally, it seemed like these went on forever, and they felt a bit like a chore.

Still, uneven storytelling and repetitive combat aside, I enjoyed most of my time in Kamurocho and Onomichi. Over the course of two games, I’ve developed quite a soft spot for Kazuma Kiryu. As the credits scrolled and I realized that this would be the last game he’d star in, I felt a pang. I’m sorry to see him go. But hey, we’ll always have the memes, right?

Yakuza 6 launches on April 17 for PlayStation 4. The publisher sent us a digital code for the purposes of this review.