Sharkmob is the latest indie studio to spring forth from the deep talent pool of triple-A developers. Its founders have racked up more than a decade each at Ubisoft Massive, working on the likes of Tom Clancy’s The Division and IO Interactive’s Hitman. Today the new studio announced that it’s working on a multiplayer game that will debut on PC and likely Xbox One and PlayStation 4 as well.

The Malmö-based studio is keeping details about the game and release date under wraps. However, Sharkmob CEO Fredrik Rundqvist has revealed that the team has licensed intellectual property (IP) that he’s calling a “cult classic.” The plan is to turn it into a franchise, complete with content updates and live services once it’s launched.

Other studios have successfully licensed IP from shows and movies and turned them into popular games. For instance, publisher and developer Funcom explored the Conan the Barbarian universe in an open-world exploration game, Conan Exiles, which sold 320,000 copies in its first week. It has also reimagined its own IP — the massively multiplayer online role-playing game The Secret World — and relaunched it to appeal to more players.

Developing games using existing IP has several benefits. For one, part of the audience may already be familiar with franchise. It also enables developers to focus on expanding the world that’s already there rather than expend energy on laying down exposition.

“We’re not really interested in making a more traditional single-player type of game,” said Rundqvist in a phone call with GamesBeat. “What we play privately, the kind of games we love, are very social, very competitive, always multiplayer. The more the merrier. Of course, in our opinion, the pure mechanics of that are not interesting if you don’t have the right IP, the right setting, the right fantasy to get people really excited about the game mechanics we provide. I guess that also gives you a hint as to what kind of game we’re making.”

“I’m not sure, but I think this is fairly unusual about Sharkmob, which is that we have five guys who’ve done games for 10 to 12 years together, leaving together to start something new,” said Rundqvist. “We felt more safe working together again than we would have if we were just going off on our own. If you take the five of us, I don’t think it’s exaggerating that the five of us cover a 360 view of everything you need to know to start a company, start a studio, make a game, create an IP, be sure about technology, art direction, game direction, all that stuff.” 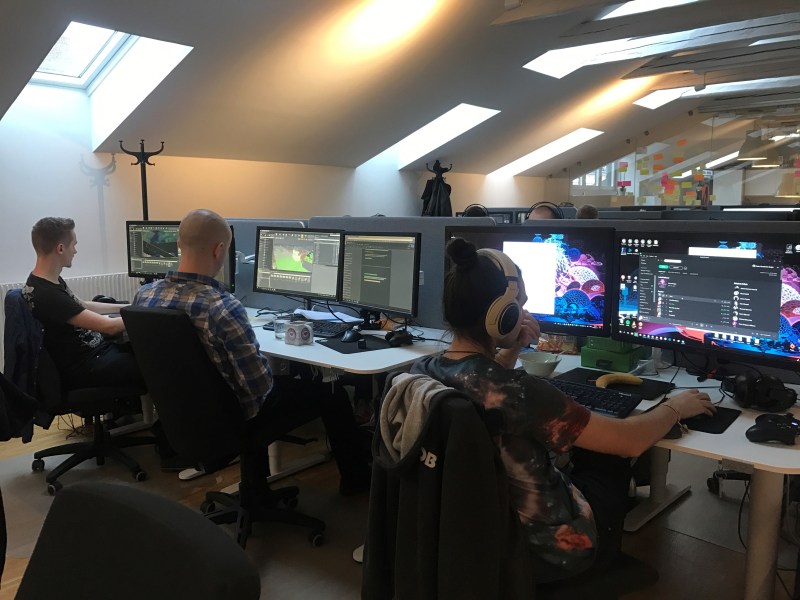 The senior team is reprising their roles from The Division at the new studio, which it founded in 2017. Growing the team has been challenging, since the studio’s Swedish neighbors include huge companies like EA DICE, King, and, of course, Ubisoft Massive. Despite the steep competition, Sharkmob now has 30 full-time employees.

When Sharkmob first began recruiting, its strategy was to first target senior developers with a lot of experience. After a few months, it shifted to looking at new talent. Rundqvist said they decided they didn’t want to be a “company of only old people” — so it started looking for younger developers.

“What we’ve tried to do is couple the senior, experienced people with the new, young people,” said Cortes. “The energy that the new recruits bring improves the senior people. The seniors are always learning while they’re teaching the new people. There’s so much energy and curiosity that it improves both people. That’s something we’ve been very successful with.”

For many of the founding members, a major motivation for leaving the triple-A scene was to get hands-on again with a new game. Keeping the company small will make it easier to be on the frontline of development and cut down on time spent on managing personnel.

“For me, a lot of it was just getting closer to a game again,” said Sharkmob technical director Anders Holmquist. “You get these huge projects, and you get so far away from the game that you’re not really making a game anymore. You’re making a project. I think that for me it was important to get hands on again, to be making a game, and not just some hypothetical project.”

“I remember when my dad bought the family’s first computer and we got our first computer game up and running,” added Sharkmob creative director Petter Mannerfelt. “It was in the early ’80s. I was 6 or 7, and that’s when I realized that my dream was to be part of creating a new team and a new studio, to make a game. That’s how long I’ve been dreaming about this opportunity.”

The benefits of going indie

Sharkmob is naturally drawing from its experience at Massive, such as learning how to manage scope and make sure everyone is on the same page when it comes to a game’s vision. And it’s aiming to cap its recruitment at 100 to 150 employees in order to stay lightweight. This also helps with communication and makes sure it can move quickly.

“Here we can go through a decision in just minutes, which cuts down on all lead times immensely,” said Sharkmob’s IP and communications director Martin Hultberg. “The flatter organization and the direct communication have been a great difference, for me at least, when it comes to decision-making and directing issues toward whoever needs to do something. There’s a huge difference there.”

Working with fewer resources and a smaller team come with drawbacks, of course. However, the team points to successful games like Minecraft and PlayerUnknown’s Battlegrounds as evidence that indie studios’ freedom for creativity is more of a boon than a hindrance.

“Those games would never have been done at a big publisher,” said Rundqvist. “They’d never fill all the checkboxes that you need to have to make a game there. They need to come from the indie scene, from people who believe in an idea and are free to do so.”