Competitive gaming will enable a new layer of competition underneath the professional esports players, where cyberathletes compete for million-dollar prizes. With Amazon’s competitions, you may win a free Amazon Echo Dot. This kind of layer of competition is what could help esports grow to a $1.5 billion business by 2020, according to market researcher Newzoo.

GameOn is built on Amazon Web Services cloud infrastructure and works on any operating system, giving developers the ability to scale quickly. The GameOn applications programming interface (API) is aimed at making it easy to add competitive, prize-based play to a game and offload that task so developers can concentrate on making a great game, said Marja Koopmans, director of Amazon Competitive Gaming, in an interview with GamesBeat.

Amazon GameOn is a way to bring more amateur players into competitive gaming and esports. They can compete for in-game and real-world prizes fulfilled by Amazon. This service also gives developers the ability to drive engagement and increase monetization of their games.

“We allow developers to add competitive play into games, and reward players with in-game or real-world prizes, fulfilled by Amazon,” she said. “This came from conversations with mobile game developers about how we can make games more engaging.” 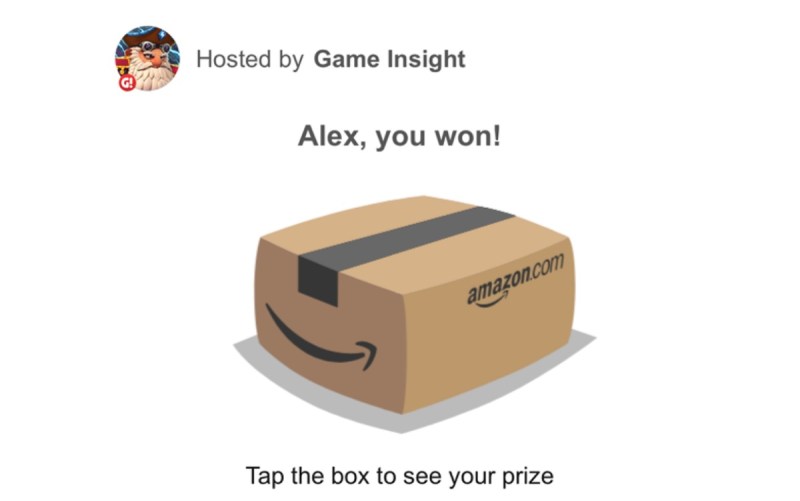 Above: You can get prizes in Amazon’s GameOn contests delivered to your door.

GameOn currently supports leaderboards, leagues, and multi-round competitions and lets developers create custom events such as local and regional competitions. Developers can also enable players and streamers to create their own user-generated competitions and invite participants, allowing players to connect with friends and expand their gaming network.

Amazon has been working on the idea for a while. At first, the company evaluated whether the esports successes on the PC could be repeated in mobile games. In September 2016, the company ran a successful esports mobile game competition with Super Evil Megacorp’s Vainglory. Then, in December 2016, it held a tournament for casual mobile games in Las Vegas with games like Disney Crossy Road.

You could see tension on players’ faces in casual games,” Koopmans said. “But it took a lot of manual labor to pull off the events. We wanted to foster competitive play, but in a way that made it easier on the developer.”

Today, Amazon GameOn is being used by nWay, Game Insight, Millennial Esports’ Eden Games, Umbrella Games, Nazara, Mindstorm, Mokuni, Avix, and GameCloud Studios in games ranging from casual to core across different genres. Players in these games are already winning real-world prizes. Since Amazon wants to stay away from gambling, those prizes do not include cash, Koopmans said.

“We were particularly drawn to the real-world prizing aspect of GameOn. In-game tournaments drive player engagement, and prizing creates a stronger incentive for players to participate.” said Jesse Cherry, senior product lead at nWay, in a statement. “Administering real-world rewards is complex, and Amazon is a valuable partner who can make the logistics easy and seamless.”

Above: Amazon’s GameOn lets players compete for prizes in games.

Millennial Esports’ Eden Games, the developer behind some of the world’s most successful racing franchises including V-Rally and Test Drive Unlimited, uses Amazon GameOn to scale the size of the competitions they run in Gear Club.

“We’re committed to growing the competitive gaming and esports community, and GameOn APIs give us an exciting new toolset to do this with,” said Anatoly Ropotov, CEO of Game Insight, in a statement. “We’ve already started using GameOn to provide our fans with real-world prizes and new types of tournaments that allow players to compete against each other across PC and mobile.”

Amazon GameOn will be powering competitions in highly anticipated sequels from Vector Unit and Lima Sky with the ability to win prizes in both Beach Buggy Racing 2 and a brand-new Doodle Jump title. In addition, new upcoming releases from Canvas Games, Superpower, PlaySide Studios, and Asmodee Digital will leverage GameOn technology to bring competitions to their fans.

“There is no professional sport without the amateur and the rec league,” Koopmans said. “You have to cultivate the next pro players. Physical sports have this base, and you will see the same happening with competitive gaming. We are wired for competition, but in mobile games, there’s a void today. At home, my boy is constantly connected with buddies on consoles or the PC. But on mobile, that’s when the connection with fellow gamers is lost.”

Developers can use GameOn APIs for free until May 1, 2018. After that date, the first 35,000 plays per month are free for a limited time, then developers will pay $0.003 per play. Physical prizes fulfilled by Amazon will only be available in the U.S. at launch.

Amazon has made it easy to redeem a prize for players. On a mobile phone, all you have to do is press a couple of buttons and you can claim your prize.