Facebook continues its challenge to Amazon’s Twitch streaming service today with new features that center on its growing its community of livestreamers. At the Game Developers Conference (GDC) in San Francisco, the social network is announcing direct livestreaming from PC games to Facebook and in-game rewards for livestream spectators.

This push for more streaming features falls under Facebook’s ongoing focus to make it easier for developers to integrate video sharing features directly into their games and to make livestreaming accessible for more players.

The new livestreaming applications programming interface (API) makes it possible for developers to add Facebook streaming functionality directly into their PC games. This means that now, in a matter of seconds, players can livestream from the game client to a Facebook surface (Profile, Pages, Groups) without any hardware or third-party software required.

The new livestreaming API will also be available for mobile developers in the coming weeks via an updated mobile SDK. 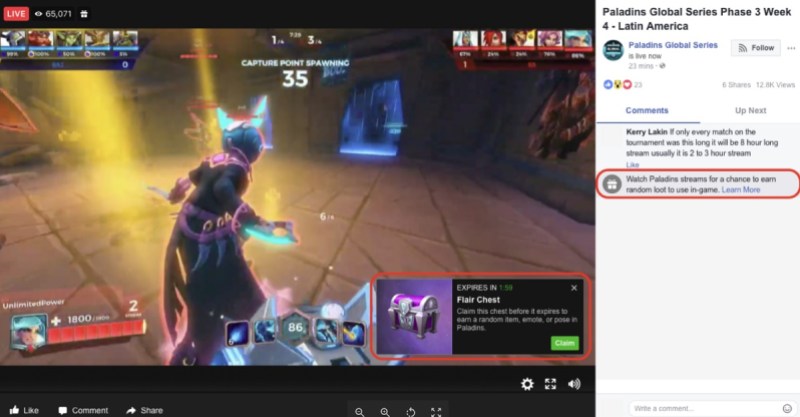 Above: Spectators can get in-game rewards in Paladins: Champions of the Realm via Facebook’s latest features.

And a new rewards feature enables developers to grant free, in-game rewards for viewers that tune in during livestreams on Facebook. Rewards help to increase community interaction as players watch together while also offering an incentive to jump back into the games.

Hi-Rez Studios, developer of Paladins: Champions of the Realm, has been testing rewards during the Paladins Global Series and has seen increased engagement and very positive viewer feedback. Based on the strong results, Hi-Rez will officially launch rewards during the Paladins Premier League on March 24. And Facebook is making the rewards feature available for all PC game developers.

More than 800 million gamers play a Facebook-connected game each month, and the games SDK is the engine that helps to power the community across every gaming surface from mobile to console to PC.

The PC-game-streaming feature will help developers bring more players into their games earlier, for longer chunks of time, and more often, Facebook said. Players will soon be able to record great gaming moments and share videos on Facebook Pages, Groups, and Profiles via a new clipping feature that is in the works.

Facebook Login and Friend Finder are tools to help game developers connect their communities together. At BlizzCon, Blizzard cited a Facebook integration called Suggested Friends as a key contributing factor to seeing players double their network of friends on Battle.net, the studio’s online gaming platform.

With Key Player Stats, a new feature in the games SDK, PC game developers can help their community connect by integrating real-time player stats from their titles into Facebook Groups. As a topic, games make up one of the largest categories of Groups on Facebook overall. Now, players can post their stats to a Group to connect and find others to play with.